Meher Baba did not meet Albert Einstein in person, but knew of him.

This web page solely tries to detail the interactions between Meher Baba's proxy - Norina Matchabelli & Albert Einstein and his family, also his views on the subject of faith, religion and God.

The full life details of Einstein's life can be read in other publications such as Wikipedia ( see link above ) and many others .

There are no known photos taken of Meher Baba & Albert Einstein together at any time. 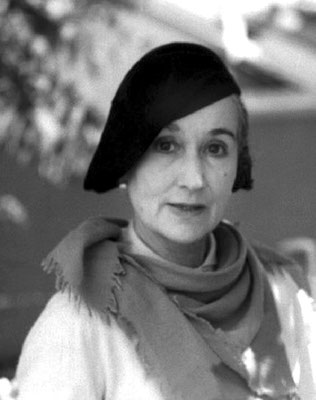 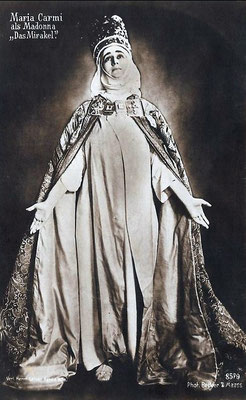 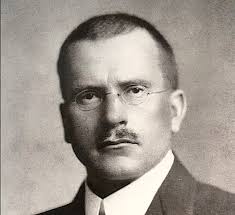 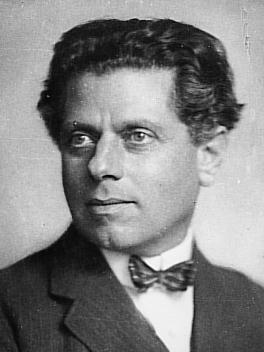 During Norina's and Quentin's ( Tod )travels, the most notable of their contacts were the psychiatrist Dr. Carl Jung in Switzerland at the end of October; theater producer Max Reinhardt (who had directed Norina in "The Miracle" ); and the physicist Albert Einstein outside of Berlin.

It was through the courtesy of Professor Lüders, a famous professor of Sanskrit at the University of Berlin, that I had the unusual chance of visiting Einstein.  I say unusual, because he hates inquisitive visitors of any kind, unless their purpose for coming is of direct interest and value to him. Professor Lüders, who graciously intended to give hospitality to Baba in Berlin, arranged the meeting within twelve hours' notice. The word Baba, I suppose, magically opened the door for the visit, as I personally had no excuse to make myself interesting.

The next day at two in the afternoon, I stood before the door of "the most intelligent man in the world." Through the glass door of his very modernistic bungalow at Caputh, I could see him, sitting before a pile of manuscripts on a narrow table in his office and writing intensely. When the bell rang, he got up and opened the door.

Our meeting immediately became intimate and warm. He said, "My daughter loves you very much and I know you by reputation. I hear through Luders that you have to tell me something about a great spiritual man." This rather direct way of addressing the key point of my visit put me at ease. Within a few seconds, Baba was the topic of conversation.

It is very difficult to repeat Einstein's dialectic literally. It was very subtle, sophisticated and intricate. The first point that seemed to puzzle him most was: How is it possible for a man who is silent to influence others? He said, "Everything I have achieved with my science, in my philosophy, was through the power of thought expressed by language. What can he touch in other individuals but the mind? Jesus, Buddha, Krishna, Plato — they left words in the mind of man. And these words created thought and thoughts make man!"

"Has man ever realized the innate God within him, has he ever experienced the Truth through books, words, or schools of thought?" was my quiet answer.

He looked somewhat wondrous, but reverent, at the age-old statement that God Is — He is to be realized. After a few moments of silent concentration, he continued, "How do you recognize such a man? Was Jesus a popular figure in his time?"

"Such a man expresses Truth," I replied. "These men create facts of a deep, re-ordaining order.

Facts are results. The results that these omniscient and omnipotent Pure Beings created have endured. Truth is its own witness."

Einstein's humor suddenly turned the course of thought. With the smile of a wise child who knows how to evade dangerous ground, he said, "Well, tell him for me that if he is able to transmute the consciousness of my cat that has the vulgar instinct to eat birds, I will believe in him!"

We discoursed for a little while longer. When Einstein realized that whatever is, is created by God-love and that no one is in possession of the pure, omniscient and omnipresent power unless he is merged in God, he found the subject too much to grasp. He abruptly turned around and apologized for having to finish the last page of his new book. Before leaving the room, however, he added, "Should we ever have the privilege to be in the same place, in the same town in some part of the world, do you think Meher Baba would come to see me?" I replied, "When you wish ... He will!"

Mrs. [ Elsa ] Einstein and I remained together, conversing for another hour about things less profound but dear to me. We recalled a period when her daughter, Margot, who is Einstein's most dear child [ though a stepdaughter ], and I were deeply affectionate friends.

Einstein was the rare scientist who spoke and wrote about God frequently, and he described himself as deeply religious. He had a great admiration for Jesus, Buddha, Mahatma Gandhi and Rabindranath Tagore (who he met in Germany in 1930). He was known to be indifferent to material things and observed, "The commonplace goals of human endeavor — material possessions, outward success and luxury — have always seemed to me despicable." And he once referred to each of his possessions as "a stone tied round my neck." 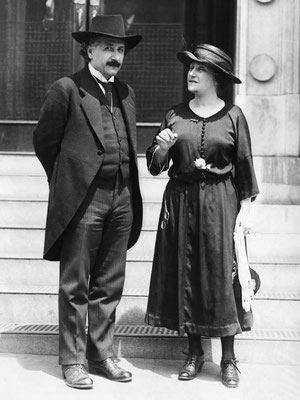 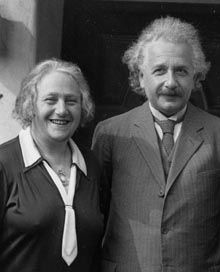 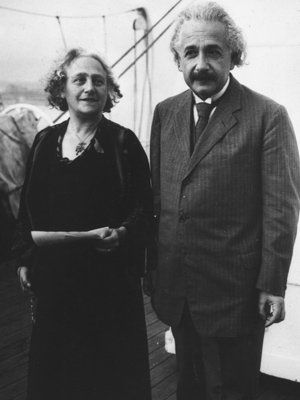 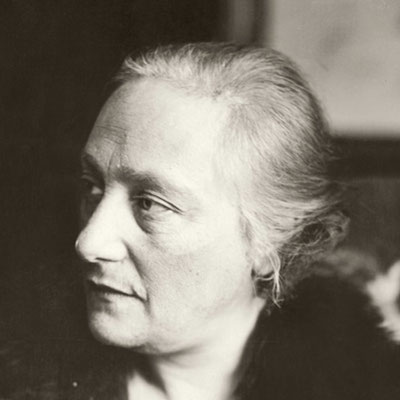 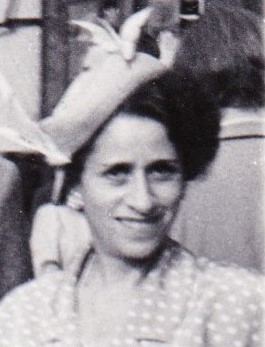 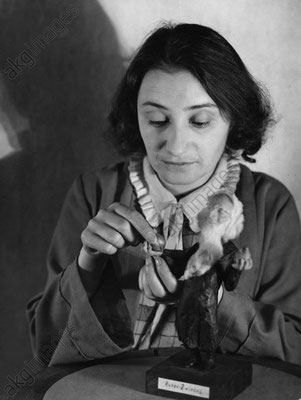 Einstein said  : The idea that there is a personal God who rewards and punishes is “childish”, he says, but ultimate answers about the universe may be beyond the “grasp” of mankind. 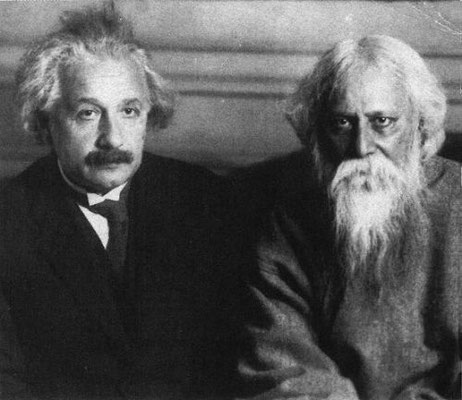 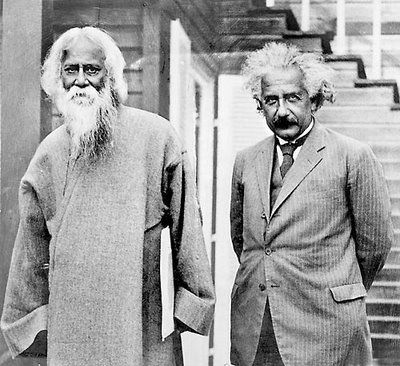 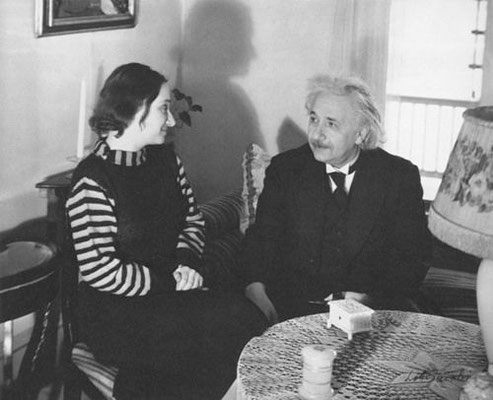 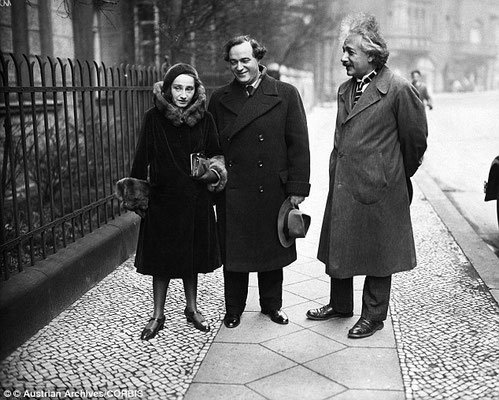 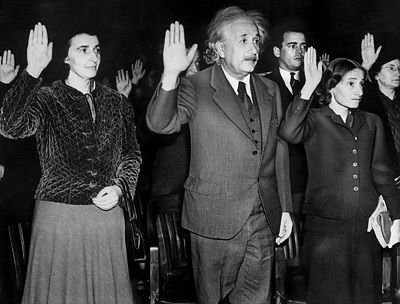 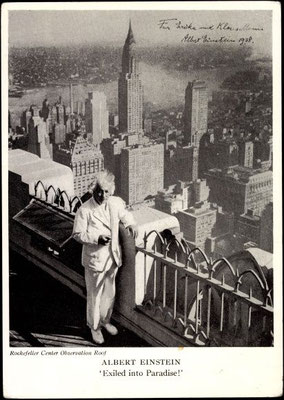 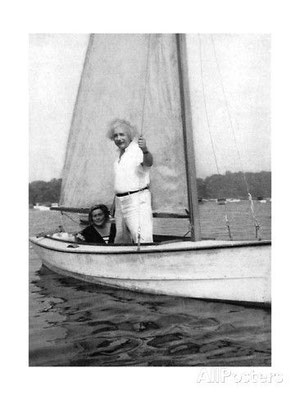 A letter written on September 28, 1949, by legendary physicist Albert Einstein describes his idea of God. 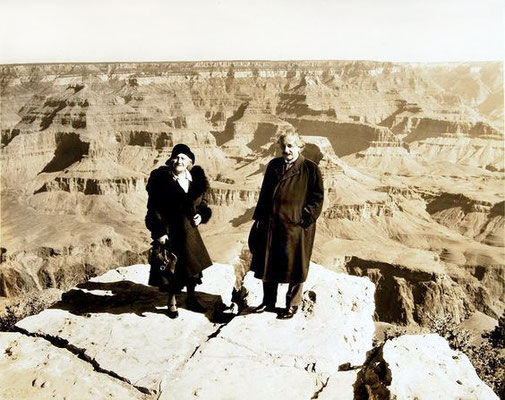 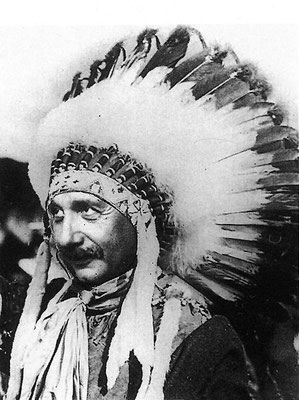 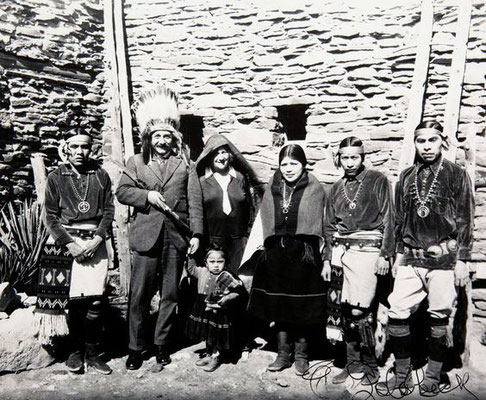 In early January 1954, Albert Einstein wrote a letter to Eric Gutkind, the author of "Choose Life, the biblical call to revolt". Gutkind had sent Einstein a copy of his book. The letter that Einstein wrote is now referred to as the "God Letter" . 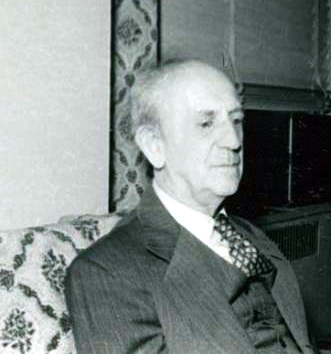 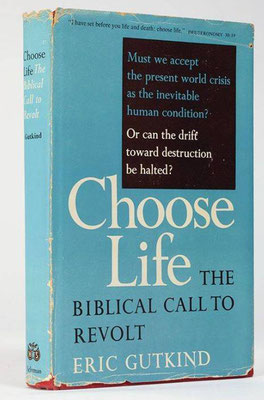 Inspired by Brouwer’s repeated suggestion, I read a great deal in your book, and thank you very much for lending it to me. What struck me was this: with regard to the factual attitude to life and to the human community we have a great deal in common. Your personal ideal with its striving for freedom from ego-oriented desires, for making life beautiful and noble, with an emphasis on the purely human element. This unites us as having an “unAmerican attitude.”

Still, without Brouwer’s suggestion I would never have gotten myself to engage intensively with your book because it is written in a language inaccessible to me. The word God is for me nothing more than the expression and product of human weakness, the Bible a collection of honorable, but still purely primitive, legends which are nevertheless pretty childish. No interpretation, no matter how subtle, can change this for me. For me the Jewish religion like all other religions is an incarnation of the most childish superstition. And the Jewish people to whom I gladly belong, and whose thinking I have a deep affinity for, have no different quality for me than all other people. As far as my experience goes, they are also no better than other human groups, although they are protected from the worst cancers by a lack of power. Otherwise I cannot see anything “chosen” about them.

In general I find it painful that you claim a privileged position and try to defend it by two walls of pride, an external one as a man and an internal one as a Jew. As a man you claim, so to speak, a dispensation from causality otherwise accepted, as a Jew the privilege of monotheism. But a limited causality is no longer a causality at all, as our wonderful Spinoza recognized with all incision, probably as the first one. And the animistic interpretations of the religions of nature are in principle not annulled by monopolization. With such walls we can only attain a certain self-deception, but our moral efforts are not furthered by them. On the contrary.

Now that I have quite openly stated our differences in intellectual convictions it is still clear to me that we are quite close to each other in essential things, i.e; in our evaluations of human behavior. What separates us are only intellectual “props” and “rationalization” in Freud’s language. Therefore I think that we would understand each other quite well if we talked about concrete things.

With friendly thanks and best wishes,

One can smile at Norina's naivete about whom to bring to Baba, but it is interesting to note, first, Baba gave in to her whims, and second how lucky these people were to meet Him, ready or not! Sometimes He refused, for example, in India, she begged Baba to meet Krishnamurti ( he once was acclaimed as Avatar of the Age by the Theosophists, a position he wisely repudiated ). Baba said, "Leave him alone, he is on the fifth plane and will stay there until he dies."

It was she who told me Einstein met Baba ( the mandali have no record of this meeting ). His daughter Maria ( her actual name is Margot ) had been drawn to her in her role of the Madonna. She said Einstein remarked, "All I know is nothing compared to what Baba knows."  ( There is no proof of a meeting or of the last remark ). 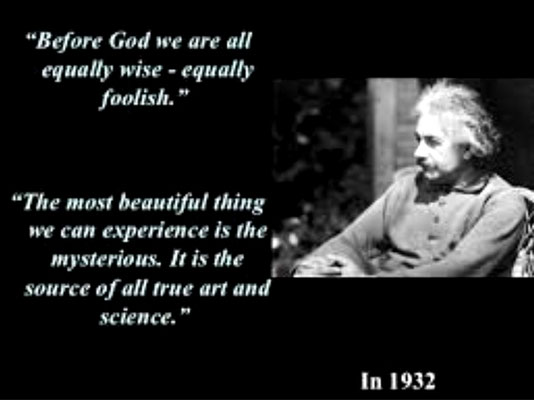 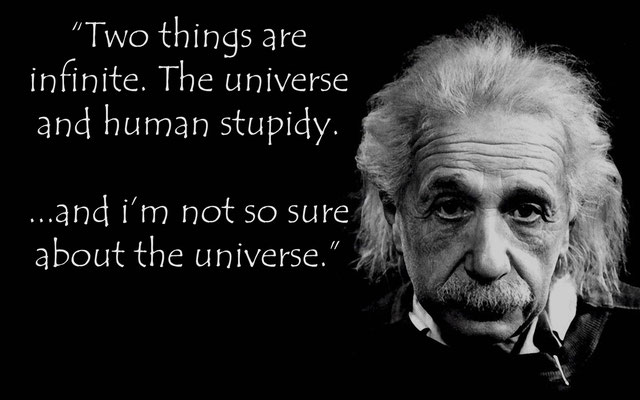 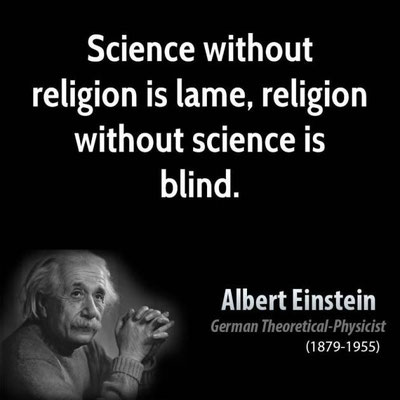 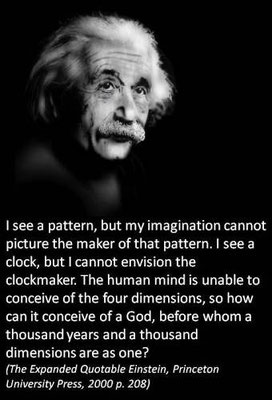 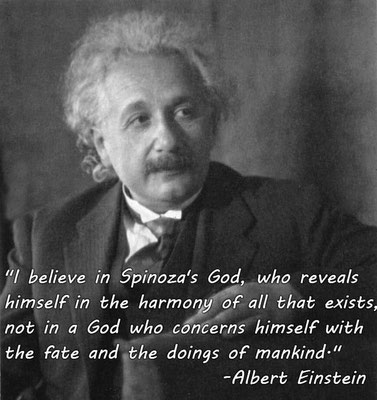 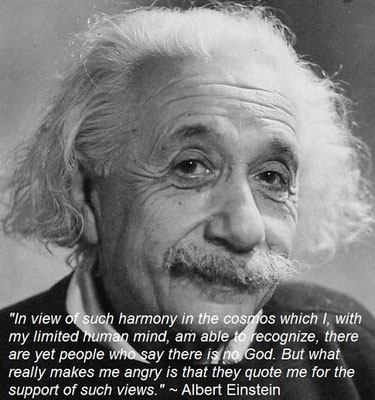 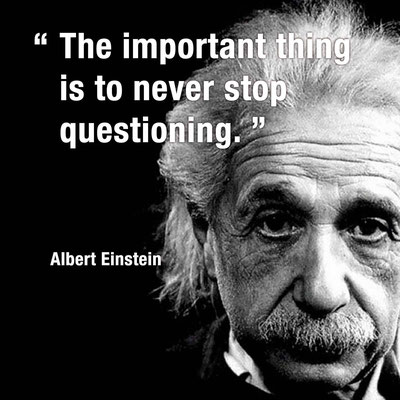 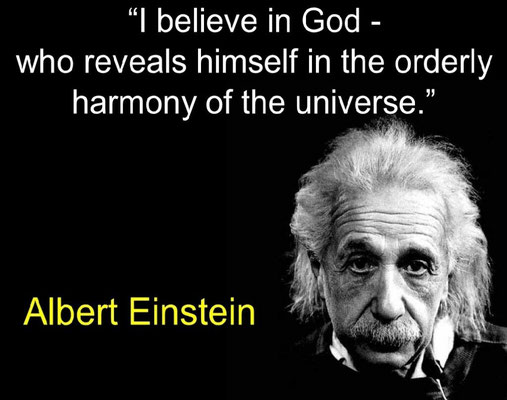