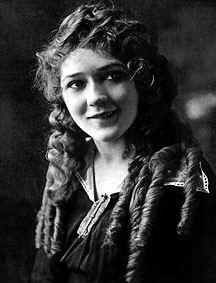 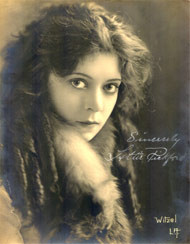 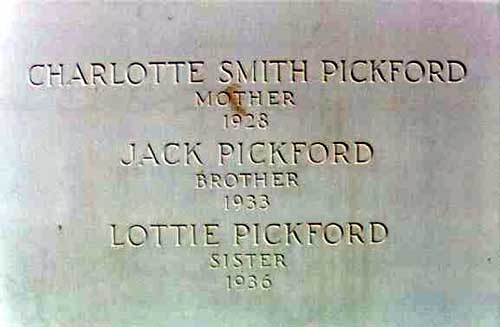 Among those invited to the reception were Gary Cooper, Charles Farrell, Lottie Pickford and the lady who wrote Mary Pickford's screenplays. Countess Dentice di Frasso was also present. Baba stayed at the reception for two and a half hours. Mary Pickford greeted Baba at the door of Pickfair and led him to the spacious hall.

Lottie Pickford (June 9, 1895 – December 9, 1936) was a Canadian silent film actress, socialite, and sister to Mary Pickford and Jack Pickford. Her career is often overshadowed by that of her siblings and though she was a notable figure in the 1920s her films and role in the Pickford acting family is now largely forgotten. Perhaps one of her best known roles was in The Diamond from the Sky directed by William Desmond Taylor in 1915.

Pickford was born Charlotte Smith, to John Charles Smith and Charlotte Hennessy. Pickford was named for her mother.[1] She was the middle child, born 3 years after her sister Mary Pickford and a year before her brother Jack Pickford. She quickly became her father's favorite, much to her sister's annoyance.[2] After mistakenly believing she was a boy when first born her father lovingly gave her the boyish nickname, 'Chuckie'.[2]

As a child she caught typhoid fever, though she wasn't as sickly as Mary was.[3] Pickford's father left the family while she was young and Mary took over the father figure role. This caused Jack and Lottie to become extremely close, banding together against their sister who they saw as strict.[4] Pickford idolized her brother Jack, and they remained close throughout their lifetimes.[5] Despite her tense relationship with Mary she was protective of her, once jumping on D.W. Griffith to defend her sister during a heated argument with the director.[6]

In need of extra income the family began to act. On January 8, 1900 Lottie and Mary began acting in The Silver King. Pickford was either offered a lesser sum than her sister or was part of a packaged deal.[7]

The family eventually moved to New York City where they all acted in various productions, sometimes together, sometimes not. At one point Lottie and Mary had to travel on their own for one production.[5]

Of the family Mary was the breakout star, and her family members were usually attached to her as a contractual stipulation.[5][8] This continued when Mary began in films, eventually getting her siblings on the payroll.[9]

In 1907 Mary adopted the stage name 'Mary Pickford' (her birth name was Gladys Louise Smith). The rest of the family adopted the Pickford name by the time they began appearing in films. Mary signed with D.W. Griffith's Biograph Company in 1909 and also secured work for her siblings. Between 1909 and 1910 Mary made 80 shorts, Jack made 28, and Lottie made 25.[10] Of the three Pickfords, Lottie's talents were considered the weakest. Linda Arvidson said Mary had decided her sister was not pretty enough for films, and had done her best to keep her away from Biograph.[10] However the Pickford family had always worked together, and Lottie was on the payroll. She often hung around sets, grabbed an odd role here or there, and would understudy for Mary.[10]

When the Biograph Company departed for California, Pickford and her mother were left behind. She would eventually join her sister in California. As Mary became a bigger star Pickford's employment was a condition of her contracts.[11]

Away from her sister, Pickford's first starring role came in 1914 in The House of Bondage. It was a vice film, with Pickford playing a prostitute. This greatly contrasted her sister's role as 'America's Sweetheart'. The film did not receive good reviews, being considered too crude.[12] Pickford then made Fanchon, The Cricket in 1915. It is the only film in which all 3 Pickford siblings appear, and was thought lost until rediscovered in the British Film Institute by a fan.[13]

Pickford then starred in The Diamond from the Sky serial, though it was more humiliation for her; she was only given the role after Mary turned it down.[12] A Photoplay article from around the time of the release declared her "Pickford The Second!" and compared her to her sister, albeit as a worthy sequel.[12] However, the serial was jeopardized when she became pregnant with her husband. This incident put her on the unofficial Hollywood blacklist for a short time.[14] Pickford only performed in 5 roles between 1915 and 1918, when she took a break from acting most likely due to personal problems.

After her divorce she took a starring role in 1921's They Shall Pay which co-starred her future husband Allan Forrest. Pickford again took several years off of acting only to return in a minor role in her sister's 1924 film "Dorothy Vernon of Haddon Hall". She billed herself as Lottie Pickford Forrest.[15] Her final role would be in her brother-in-law Douglas Fairbanks Sr.'s "Don Q Son of Zorro" in 1925. During her career Pickford starred in only 8 features while her brother starred in over 40 features.[16]

The last time Pickford saw Mary they were playing a Christian hymn, "Oh Jesus when I'm sad and lonely" on the piano. Pickford bet her sister a $1 she couldn't listen to it without crying. The girls apparently had a religious conversation, as by this point in life Pickford had taken a religious turn.[16]

On December 9, 1936 Pickford suddenly fell ill and collapsed on the floor. She had suffered a heart attack and died. Pickford is buried at the Forest Lawn Cemetery in the family plot.[17]

Pickford was a socialite and partying was her first love. She would party all night, where drugs and alcohol were plentiful as was nudity. Pickford's maid recalled when they heard Mary's car pulling in that Pickford and her friends would, "Jump into their knickers!"[14] Pickford's parties were legendary as was her reputation as a party girl.

Despite her faults Pickford was known to be down to earth, friendly, sweet, and unpretentious.[18]

In 1915 before the release of The Diamond from the Sky Pickford had quietly married a New York broker named Alfred Rupp on an unknown date.[14] The couple had a daughter Mary Pickford Rupp (who would be later renamed Gwynne Rupp) in 1915.[14] By 1919 the couple no longer lived together and by 1920 they had divorced.[19]

For unknown reasons Pickford gave her mother custody of her daughter, who was then renamed Gwynne in 1920. Pickford did not comment to the press on the matter, other than to say she would never marry again.[18] It is likely by this time Pickford had become an alcoholic (alchoholisim ran in the Pickford family) as well as a drug user, possibly prompting her mother to take custody of her daughter.[18] Gwynne remained with Charlotte until Charlotte's death, at which time Mary took custody of her until Gwynne married Hugh Ernst at age 24 (months after her mother's death) and left Pickfair in 1939.[20]

Pickford married actor Allan Forrest in 1922. She performed her two final screen roles during this time under the name Lottie Pickford Forrest. The pair divorced in 1928. On August 5, 1929 she married Russel O. Gillard, an undertaker from Los Angeles.[21] In the wedding announcement Pickford was referred to as, "Lotta Rupp".[21] She sued him for divorce in 1933 claiming she had tried to fund business for him but he had failed because of negilgence and he had not wanted to work. The judge granted the divorce.[22] Pickford then announced she had married a Pittsburgh society man named John William Lock. This would make her legally a bigamist and possibly cause her to be arrested.[22] However Pickford just giggled at the thought, doubting anything would be done.[23]

Pickford was always extremely close with her brother. When he died in 1933 Mary said of her, "Poor Chuckie...she was never quite the same after Jack's going...it was as though with my brother's passing the better part of her had died too".[22] Pickford's relationship with her sister was strained at best. In Mary's biography she defended Jack and constantly praised him, while never doing so for Pickford.[16] It seems Pickford resented her sister, once asking her, "Mary, how does it feel to be able to give Mama everything her heart desired, and all the same and honor besides?"[16]