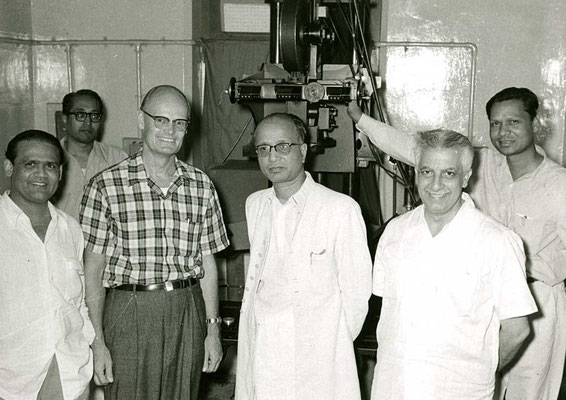 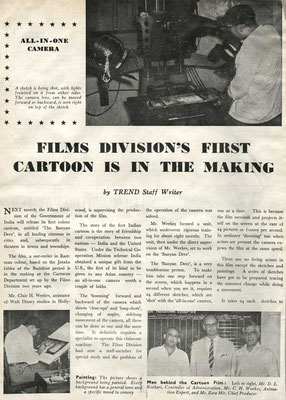 After lunch, Baba and a few others went to Fox and Universal Studios with actor Lalchand Mira, a friend of the Joneses. Here they met the cowboy Tom Mix and another actor named Ezra Mir, staying for an hour and a half. Tod returned to Paramount Studios to pick up Tallulah Bankhead who had an interview with Baba at 5:30 P.M. She had a long talk with Baba and said she was on her way to see the actress Greta Garbo and would tell her of him.

While Ezra Mir is widely and better known as the pioneer of the Indian Documentary, few know he was also a Hindi Film Director directing several films in the 1930s like Noorjehan (1931), Zarina (1932), Rickshawala (1938) and Sitara (1939).

Mir was born Edwin Myers in Calcutta in a Jewish family. It is said he adapted the name of Ezra Mir bacause he felt his original name lacked 'Indianness.' Mir graduated from Calcutta University in 1921 before initially joining his family business. Not quite taken up by the family business, Mir moved to Madan Theatres. Here he worked as an actor on the Madan stage and acted in some silent films as well and even played opposite then India's biggest star, Patience Cooper, in Noorjehan (1923).

As the filmmaking bug got deeper into Mir, he set sail for New York in 1924. Here he worked as an extra in the Rudolf Valentino - Nita Naldi starrer A Sainted Devil (1924). He then worked in the editing and story departments at Universal Pictures from 1925 - 1927 and moved on to United Artists from 1927 -1929 as a story editor. He even made a short film, The Symbolesque (1929) in this period.

Mir returned to India in 1931 joining Imperial Film Company, a company with a glorious past and one of the leading film companies in India then. Imperial was set up by Ardershir Irani in 1926 who, would go on to make the very first Indian talkie Alam Ara in 1931 just beating out Mir's former empoyers Madan Theatres' Shirin Farhad. Imperial became closely associated with the historical film genre following Anarkali (1928), was the first studio to shoot night scenes using incandescent lamps and also had stars like Sulochana, Zubeida and Jilloo on their payrol and were perhaps responsible for developing a star cult as a marketing strategy. The studio made films in at least nine languages and even made the first ever Iranian sound film Dukhtar-e-Lur in 1932! At Imperial, Mir directed Noorjehan (1931) being in familiar territory as he had acted in the 1923 version of the same story. But he soon left Imperial for Sagar Film Company where Mir directed films like Zarina (1932) and other Parsee Theatre derived films.

Mir returned 'home' so to speak as he returned to Madan Theatres in 1934-5. Here he made a number of popular romanctic and social films with artists like Kajjan that helped delay the demise of the studio. But by the late 30s Madan Theatres nevertheless had to close down, it is said on a failed deal with Columbia Pictures, but the truth is that by then the studio was already in decline caused by crippling sound conversion costs, the stabilization of film imports and the spread of the more efficient managing agancy system able to attract more speculative funding.

Mir left for Europe for a study tour and returned to India to make perhaps his most well-known films, Rickshawala (1938) for Ranjit Movietone in Bombay and Sitara (1939), made at Everest Pics that he set up himself.

Sitara was a romantic drama set in a fantasy version of a gypsy camp telling of an amorous rivalry spanning two geneartions. The film starred Rattan Bai as Azurie who marries Zamorra (Jamshedji) rather then his rival Eureka (Mubarak). Zamorra accuses her of adultery and she dies in the 'dance of death' inflicted on her as punishment. Her daughter Sitara (Khursheed), abandoned in the forest, is unable to reconcile her gypsy habit with the bourgeois society as she grows up. Things get more complicated when Eureka's wild son Tanzi (Nazir) falls in love with her and kidnaps her. The film won Mir much acclaim.

With the onset of World War II, Mir found himself inpsired by the March of Time series and turned to documentary. He made Road to Victory (1939) that used newsreel material lent by Universal and 20th Century Fox. Mir joined the Film Advisory Board in 1940. The Film Advisory Board, established in 1940, was the first example of direct state documentery film production in India. JBH Wadia, V Shantaram and Mir worked as Chief Producers here. The advisory Board was replaced by the Information Films of India. Mir worked as Chief Producer for them till 1946, producing over 170 films. The Information Films of India produced war propaganda documentaries and the Indian News Parade, the ancestor to Films Division's Indian News Review .

Mir moved on to India Film Enterprises and then to Films Division in 1951, becoming its Chief Producer in 1956 continuing till 1961. Mir was also the founding president of IDPA, the Indian Documentary Producers Association in 1956 and the Producer-In-Charge of Children's Film Society from 1962 - 1964. From 1940 onwards, once he entered the field of documentary filmmaking, Mir was responsible in various capacities as script-writer, cameraman, editor, director and producer for over 700 films! Of these over 400 were in his tenure at Films Division. Some of the well-known films are Pamposh (1954), Do You Know? (1958), This Our India (1961) and Raju aur Gangaram (1964).

Ezra Mir was honoured by the Government of India with the Padmashri in 1970. He passed away in Mumbai on 7th March, 1993.