Chapin was born in 1865, the son of Emery Chapin and Marietta Armour Chapin.

He married Elizabeth Mattocks in 1892. They had four children, Marietta, Elizabeth, Simeon, Jr. and Virginia.

Chapin founded the S.B. Chapin & Company in 1891. The securities broker had offices in New York and Chicago.

In 1908, the Chapin family moved to New York, but continued to return to Lake Geneva during the summer. Chapin helped found the Lake Geneva Water Safety Patrol.

LINN TOWNSHIP The Flowerside Farm is one of the many lovely homes located on the north shore of Geneva Lake. The private entrance is on Snake Road in the town of Linn.

For many years, this was part of the Simeon Brooks Chapin estate that originated in 1898. Chapin bought the property from L.Z. Leiter. Sources indicated that at one time, Chapin owned six farms in the county, extending from Geneva Lakes north shore to Lake Comos south shore. The estate has 538 feet of lake frontage.

Chapin was born in 1865, the son of Emery Chapin and Marietta Armour Chapin.

He married Elizabeth Mattocks in 1892. They had four children, Marietta, Elizabeth, Simeon, Jr. and Virginia.

The Lakeshore home, not visible form the road, was built in 1898. The architect was Benjamin Marshall who also did the Blackstone Hotel in Chicago. It is a rambling, hipped-roof house, covered with wood shingles.

It features a living room 68-by-26 feet with an Aeolian pipe organ atone end and an Italian hand-carved fireplace. The dining room has 34-by-26 feet, and has a marble floor and wood-beamed ceiling.

Chapin founded the S.B. Chapin & Company in 1891. The securities broker had offices in New York and Chicago.

In 1908, the Chapin family moved to New York, but continued to return to Lake Geneva during the summer. Chapin helped found the Lake Geneva Water Safety Patrol.

Their daughter, Virginia, lived in the home until she sold it in 1954.

The Chapin legacy continues in Wisconsin and through the country through the four foundations Chapin established before his death. 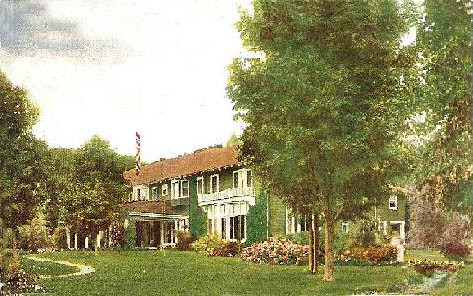 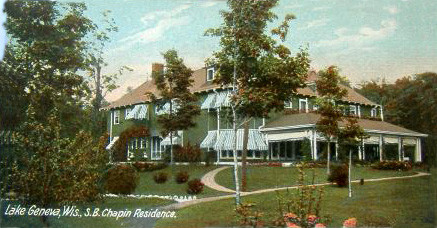 The history of Burroughs & Chapin Company in Horry County and Myrtle Beach began more than 150 years ago with the arrival of Franklin G. Burroughs in nearby Conway. An enterprising young man, he soon established successful building, mercantile, turpentine and other business ventures there. And as his businesses grew, the town flourished as a primary destination on the Waccamaw River.

After service in the Civil War, Burroughs returned to Conway and with his new partner, Benjamin Grier Collins, expanded the company's commercial interests into timber, farm credit, consumer goods and riverboats. His turpentine manufacturing business grew to be one of the largest in the country, and riverboats such as the “F.G. Burroughs” linked Horry County to the rest of the world.

A true visionary, Franklin Burroughs foresaw that one day the beaches of the Grand Strand would grow to rival the then-famous northern resort destinations of Coney Island and Atlantic City. He died in 1897 before his efforts to link the beach, via railroad, to the rest of the world were realized. In pursuit of their fathers' dreams, the sons of Burroughs and Collins completed the railroad and built the Seaside Inn in 1901, the first oceanfront hotel in Myrtle Beach. It was followed by a bathhouse and a wooden pavilion around which beach houses were constructed. By 1907, the “New Town” by the sea, as Myrtle Beach was then called, had become a popular vacation spot. Beachfront cottage lots sold for $25 each. When a contest was eventually held to name the new beach resort, Burroughs' widow, Miss Addie, suggested “Myrtle Beach” for its proliferation of wild wax myrtle bushes.

In 1912, Simeon B. Chapin, son of a prominent Chicago merchant, joined with the Burroughs family to form Myrtle Beach Farms Company. Known for his philanthropy and keen business sense, Chapin shared the belief that Myrtle Beach and the Grand Strand offered unlimited potential for future growth. His financial resources and business experience, coupled with the Burroughs' vast real estate holdings, provided for a period of sustained economic growth.

As Myrtle Beach began to take shape, Myrtle Beach Farms Company nurtured the community's growing need for roads, schools, churches, hospitals and parklands with a sense of commitment and pride.

In 1990, Myrtle Beach Farms Company and Burroughs & Collins Company merged to form Burroughs & Chapin Company, Inc. with land holdings throughout Horry County. The commitments to accomplishing planned, quality growth and giving back to the community that were established so long ago by Franklin G. Burroughs and Simeon B. Chapin continue today.

Meher Baba recuperated here for quite a while after the 1952 car accident in Oklahoma.

In 2013, Sufism Reoriented purchased the property from a private concern.

S.B. Chapin Denies He Was Mobbed.

a Bride in Collegiate Church of St. Nicholas. SISTER IS MAID OF HONOR

1877 The Silver King post office was established and S.B. Chapin served as its postmaster