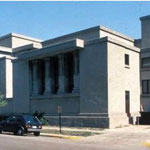 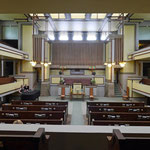 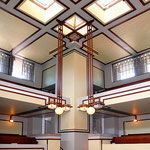 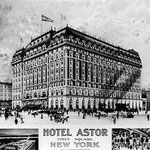 Burrill held a doctorate in divinity and served at self-described New Age churches in Denver and Buffalo.

Some of those who came had visited once or twice before, such as: the stage actress, Merle Maddern (niece of the novelist Jack London), 44; the philanthropist, Ellen Dunlop Hopkins, the founder of the New York School of Applied Design for Women;   the Manchurian author, Princess Der Ling; Countess Castelli (twice); and the radio personality E. W. Burrill, who paid a return visit to see Baba.

Edgar White Burrill was a critic and lecturer on books and the literary scene who organized the 1920s Literary Vespers series held at Aeolian Hall and Town Hall. Burrill was a major precursor to radio drama with his dramatic radio readings during the 1920s and 1930s, and one of these readings led to a milestone in broadcasting. He was a professor of English at Northwestern University.

Burrill was a graduate of Amherst College in the year 1906, a member of the Phi Delta Theta fraternity. He received his master's degree in 1910 from Lake Forest University and Northwestern before becoming a Northwestern professor.

He gave annual readings of Ida M. Tarbell's He Knew Lincoln on WJZ during the 1920s. His reading in 1923 inspired George Furness of the National Carbon Company to produce The Eveready Hour, the first commercially sponsored variety program in the history of broadcasting.

In 1925, he gave a recitation of Henry Wadsworth Longfellow's Evangeline on radio with a musical background by Max Jacob's Chamber Symphony Orchestra. This was broadcast on Tuesday, November 24, 1925, at 9 pm over WEAF, WEEI, WFI, WCAE, WGR, WWJ, WSAI, WTAG, WOC, WCCO and KSD.

The following year, he was heard on WJZ conducting the opening Literary Vespers of the 1926-27 season from Aeolian Hall. The subject Burrill selected for the opening Vespers was "The Mask of Civilization," along with a discussion of Eugene O'Neill's The Great God Brown.[4]

In 1931, Burrill told "The Story of Our Flag" over WJZ as part of the Flag Day celebration, and he took part in a Memorial Day broadcast that same year.[5]

Burrill did some of his writing as a guest at the Yaddo artists retreat. His play Master Skylark, an adaptation of John Bennett's story of Shakespeare's times, was a staple of children's theater during the 1920s.

Master Skylark or Will Shakespeare's Ward:

A Dramatization of the Story of the Same Name by John Bennett, in Five Acts (1909)

By (author) Edgar White Burrill, Illustrated by Reginald B Birch

Master Skylark or Will Shakespeare's Ward:

The modern drama;: A course of forty readings in European and American drama beginning with Ibsen and continuing...