I WAS ONLY TESTING YOU
Eruch Jessawala

In 1956 Meher Baba sent me again to visit saints and masters with the following message. Meher Baba says you are His beloved child and He wants you to remember Him and love Him.

I went to many masters and each one accepted the message reverentially and with deep love, except one who claimed himself to be a Perfect Master. When I visited him in Bombay and gave him the message, he angrily retorted, "I am not His child. How dare you bring such a message!" and then continued to rave and rant against Baba for quite some time.

I heard him out patiently and listened to him abusing Baba, but despite being a short-tempered man, I kept my cool. At one point he said to me, "If Baba were to come to me, I will make Him stand on His head and let His legs dangle in the air, and He dares to call me His beloved child!"

In between his abuses I kept interjecting Baba's greatness and compassion. He then started to narrate incidents of how spiritual masters came to him and paid their respects and Baba, he said, had the temerity to call him 'His child!' He reeled out the names of a number of them whom I indicated I had come to know over a period of time and this volunteered statement of mine both surprised him and angered him considerably.

Soon it was time for me to leave, so I turned to him and said, "Do you see how big and strong I am. For nearly two hours you have been abusing Meher Baba, and if in retaliation I were to pounce on you and hold you by the neck, you would squeak like a chicken. But I don't see you as you are. I see my Baba speaking through you, and through you He is giving me a glimpse of His other facet, for He is Infinite and He is everything."

When he heard this, he looked astounded, then said, "Well done, my child. I was only testing you."

I thanked him and left.


On the evening of December 1, 1955, Rosa Parks, an African American, was arrested for disobeying an Alabama law requiring black passengers to relinquish seats to white passengers when the bus was full. Blacks also were required to sit at the back of the bus. Her arrest sparked a 381-day boycott of the Montgomery bus system and led to a 1956 Supreme Court decision banning segregation on public transportation.

Nilu's beard stayed intact, as Baidul returned with Pathan Baba in Meherjee's car. After working with him on the 14th, Baba sent him back the same evening. Slamson had brought the mast-saint Vishandas Maharaj from Indore that same day, and the saint was kept at Meherazad. Baba intended to work in seclusion with the Hindu saint for some weeks (as he had done with the Muslim mast Pathan Baba the month before) but Vishandas Maharaj knew who Baba was, and so the work with him proved too difficult.

He was therefore sent back to Indore after five days, on the 19th.

Slamson then read a letter to Baba from Vishandas Maharaj, the mast-saint who had been brought to Meherazad from Indore during Baba's Manonash phase of work in January 1952.

On October 23rd at 3:00 P.M., before a gathering of 500 persons, I have opened a spiritual center in your name [in Indore]. I have placed there your three large-sized photographs. I have lighted a flame which I want to remain lit forever. I also wish to open a new center at Kalyan. The completion of the work at Kalyan will be done by God's will.

The saint expressed his deep feelings toward Baba and wished that Baba's name and work gather momentum day by day. He also expressed his desire to have Baba's darshan, to which Baba stated, "After April." Baba directed Slamson (who was from Indore) to tell Vishandas Maharaj to continue the work he was doing for him.

He then quoted this Persian couplet:

But be very careful with walis and masts!

Baba explained: "Walis [saints], who borrow power from vidnyan-bhumi [seventh plane], do not hesitate to use it, sometimes wiping off the best sanskaras of those who play mischief with them. Walis are independent. They are not bound to do either good or evil. Thus their contact may give one a great spiritual push, or it may retard one's spiritual progress.

"The Sadguru is like an ocean. He does not give anything, but when he gives, he gives the Ocean and you become Realized."

The sahavas group dispersed and went for tea at 3:00 P.M. Afterwards, Baba sat on the front verandah to distribute prasad. Nana Kher's uncle, Raja "Mancher Shah" Kher, had brought a parcel of oranges from Nagpur. Baba made the group stand before him and threw one orange to each. While looking to the left, Baba would throw the oranges to the right and occasionally in front of him, so every man was alert to catch them.

If a fruit fell down, Baba would have it given back and again throw it. There was much laughter and amusement during the distribution, and all coveted the prasad.

The mast-saint from Indore, Vishandas Maharaj, failed to catch his share and the orange fell to the ground. Baba had it returned and again threw it to him. This time he caught it, much to Baba's pleasure.

Bhaiya Panday, the photographer from Ahmednagar, had been called, and he took over 20 shots of Baba with different small groups ( including the one above ). Baba then led the group to the Meher Retreat building. There under the tin shed, the Marathi sahavas group sat on a carpet, and Baba sat in a chair and narrated to them about the Prem Ashram, his seclusion in the Tomb and other activities of Meherabad in the early days. In conclusion, Baba observed, "It is your great fortune that I myself brought you to my last resting place. After 60 years, this place will be a world center of pilgrimage." 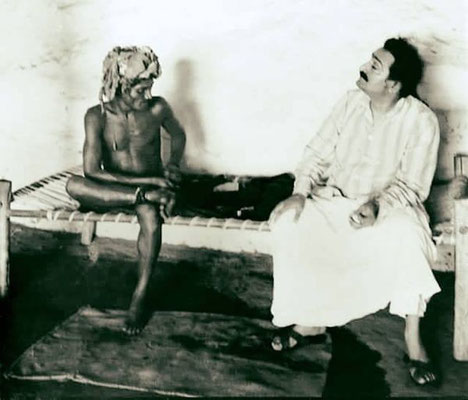 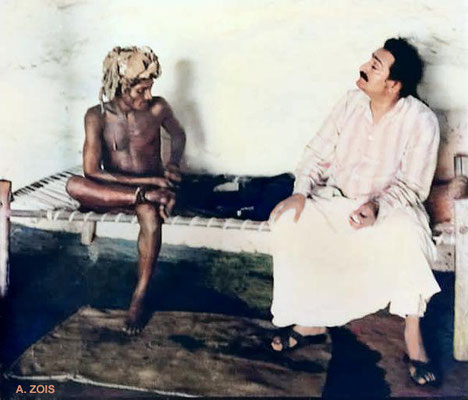 THE SPIRITUAL CHARGEMAN OF BOMBAY  by William Donkin
The contact on 11th February [1948] was undoubtedly the most important of all in Bombay. After a long journey by train, particularly in India, the first desire of the average traveller is to wipe away the dross of nights and days of locomotion by a bath, a meal, and a few hours of rest. With Baba, however, work is ever the first consideration, and as soon as the train from Allahabad reached Victoria Terminus on the early morning of 11thFebruary, Baba went at once to contact Umar Baba, the spiritual chargeman of Bombay.
Umar Baba is a man of ferocious aspect, a sixth plane mast, in a complete majzoob-like state, and is at times so violent that people fear to come near him. In spite of this, he is very greatly respected throughout Bombay, and very widely known. He is past middle age, has long black hair and a long white beard, and is often to be seen pacing to and fro with a furious look on his face.
Up to a few years ago, the spiritual chargeman of Bombay was Tippu Baba, who died in 1944. In those days Umar Baba was usually to be found near that part of the Bombay docks known colloquially as Bhau ka Dhakka. Certainly every Indian, and possibly also many outside India, will remember that in April 1944, Bombay was shaken by a ghastly explosion that destroyed much of Bombay docks, a large section of the adjacent city, and an uncounted number of lives. The two ships whose explosion caused all this devastation lay in a wharf at Bhau ka Dhakka, not far from where Umar Baba used to live.
A few days before the explosion, it is said, Umar Baba told a certain tea-shop proprietor, who used often to give him tea, that he should move away from the dock area at once, or he would most certainly be killed. This man followed Umar Baba's advice. Umar Baba also told many others to go away, assuring them that, unless they did so, they would die.
On the day before the explosion, Umar Baba left Bhau ka Dhakka, and come to the Juna Qabristan (the old graveyard) on Grant Road. After the cataclysm of the explosion, those who had heard and followed Umar Baba's exhortation to move away from the docks began to disseminate his prophetic warning, so that the renown of this great mast was spread far and wide.
Not long after this explosion, Tippu Baba passed away, and was buried in the Juna Qabristan. Umar Baba then went and lived in this Juna Qabristan in the heart of the city, and since the death of Tippu Baba he has been the spiritual Chargeman of Bombay.
When Baba entered the graveyard early on the morning of 11th February, Umar Baba was still apparently asleep, and his mujawar was manifestly fast asleep by his side. As soon as Baba approached to within a few yard of Umar Baba, the mast arose, and one of Baba's men shook the mujawar by the shoulder, asking him why he slept when his guru was awake. The mujawar got up at once, and was asked to persuade Umar Baba to sit with Baba for contact.
This was done and Baba sat with Umar Baba for a short while. Baba, who was extremely happy at this successful issue to his work, he gave the mujawar an ample reward.
THE WAYFARERS, pp. 384-386
2002 © Avatar Meher Baba Perpetual Public Charitable Trust
At some point after 1944. Tipu Baba's remains were removed from the old cemetery at Juna Qabristan to the erected dargah-mosque at Bhendi Bazaar on Grant Street, Bombay ( Mumbai ).

His dargah-shrine is on ME Sarang Marg, Mandri, Bombay. ( see further below ) 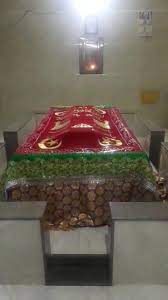 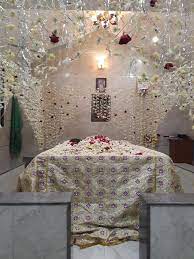 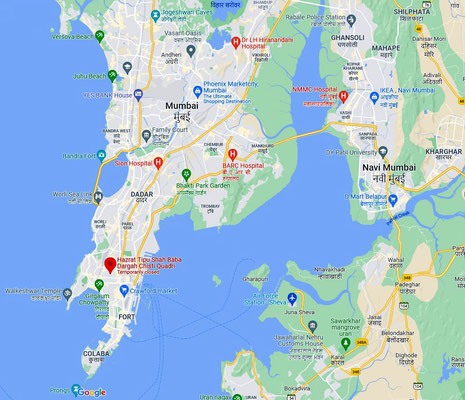 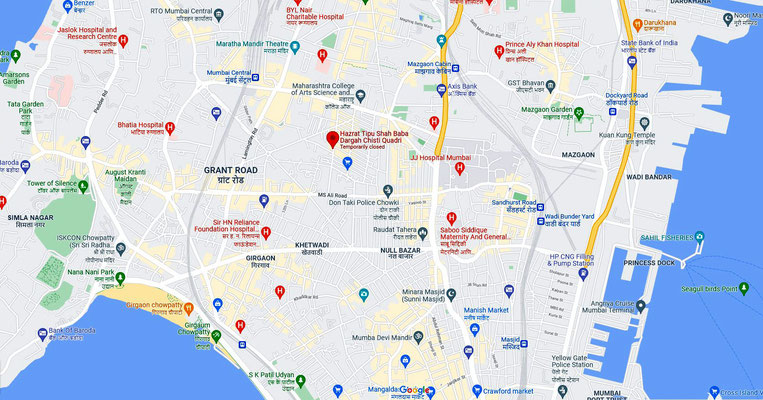 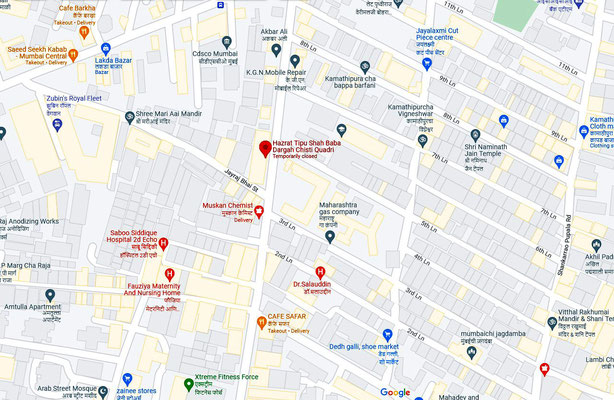 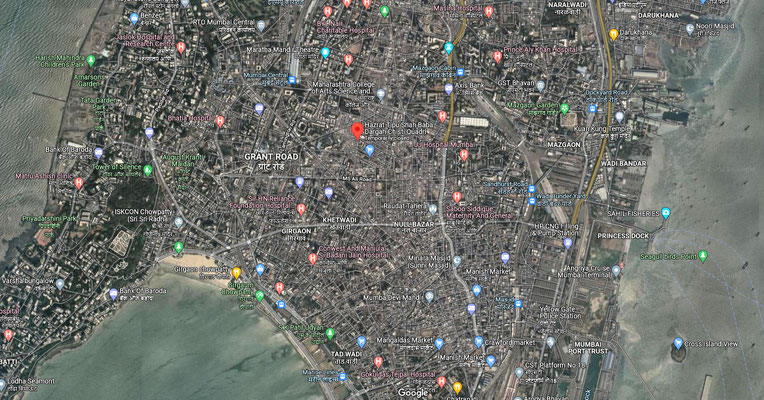 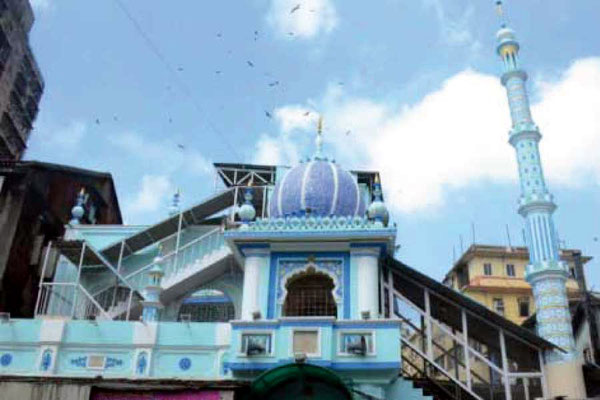 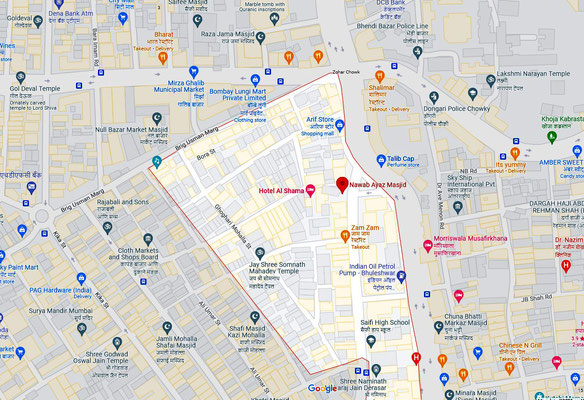 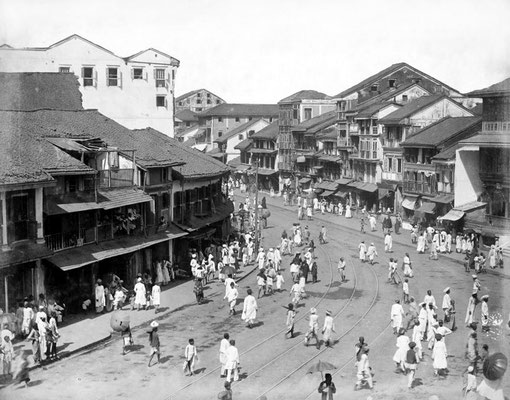 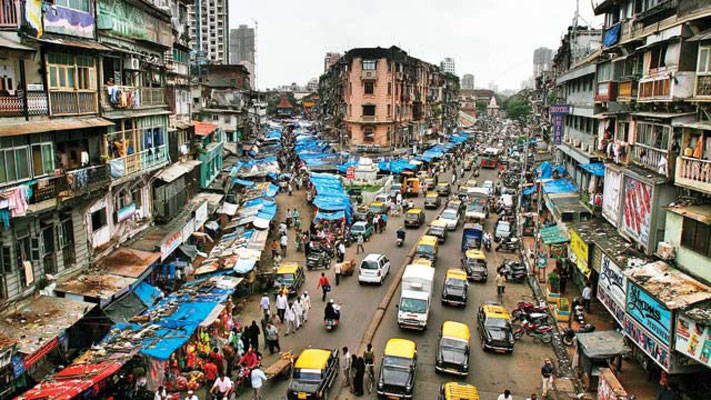 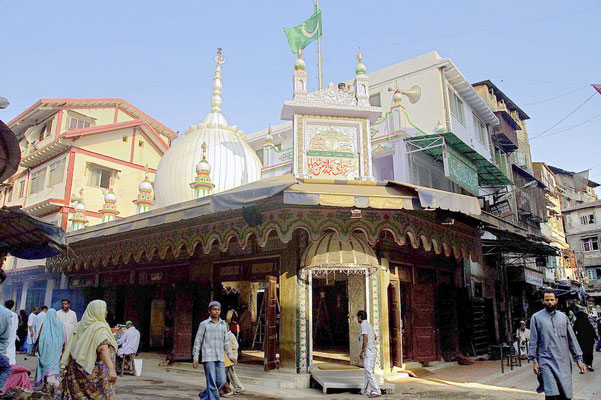 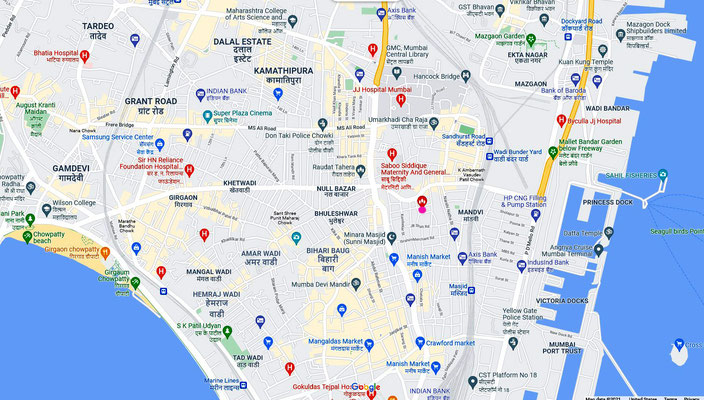 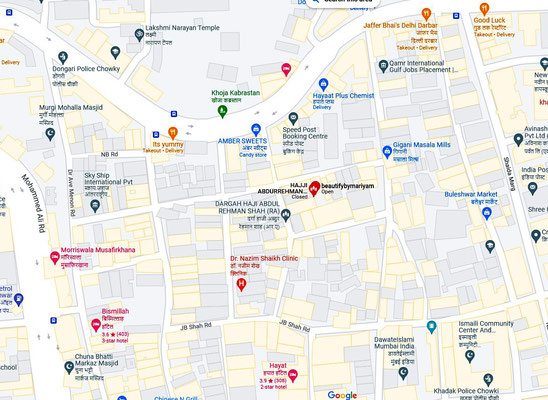 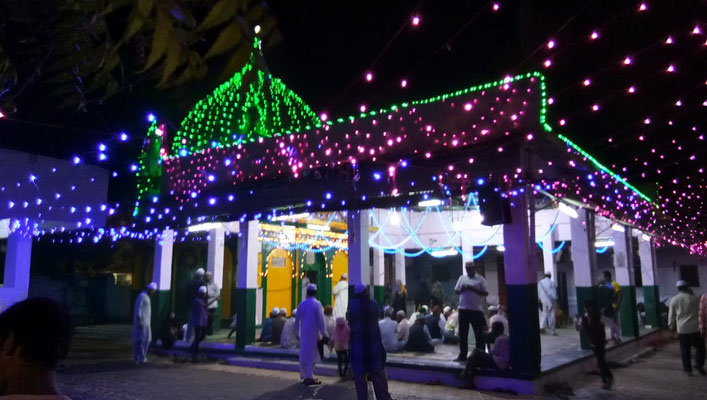 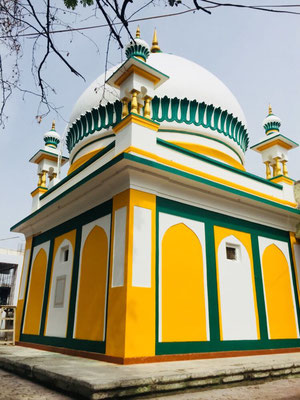 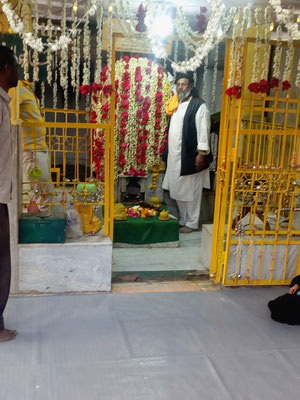