The next day he ( Meher Baba ) visited the Paramount studios again and met Maurice Chevalier and Jeanette Macdonald, who were working on  Love Me Tonight and von Stomberg and Marlene Dietrich, then playing in The Blonde Venus. 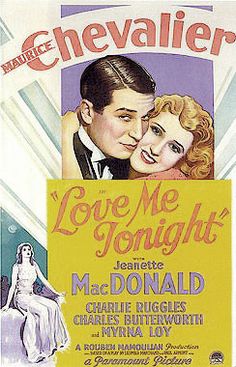 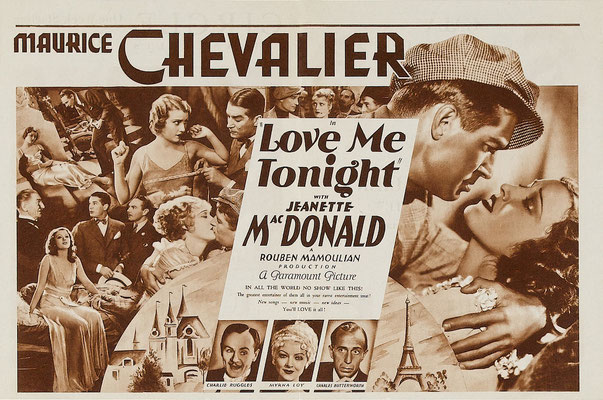 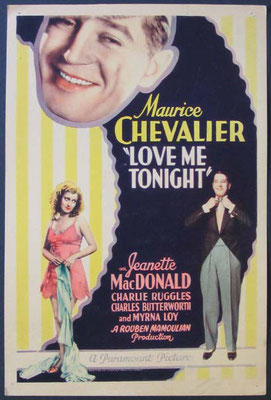 On June 2nd, Baba went to Paramount Studios again and met Maurice Chevalier, who was making Love Me Tonight with Jeanette MacDonald. Tallulah Bankhead was there and ran to Baba, hugging and kissing him.

Baba also visited Paramount, Universal, Fox and Warner Brothers studios where he met many celebrities including the French singer Maurice Chevalier and movie producer Joseph Von Sternberg. He had a conversation with actor Will Rogers and was photographed with actress Alice Faye. In Hollywood, Baba also saw several films, one of which was Imitation of Life at the Pantages Theater on Hollywood Boulevard near Vine Street. Baba and his group took walks in the evenings. Minta once recollected, "There were the most fabulous sunsets. But they were not to be enjoyed. Baba walked terribly fast and we used to run to keep up with him." 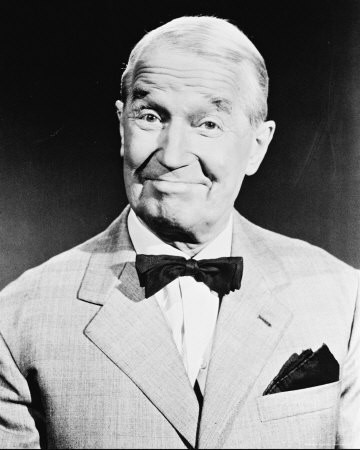 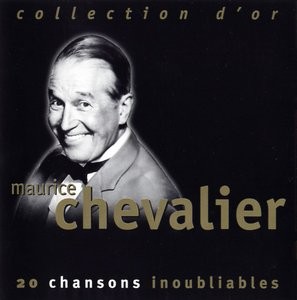 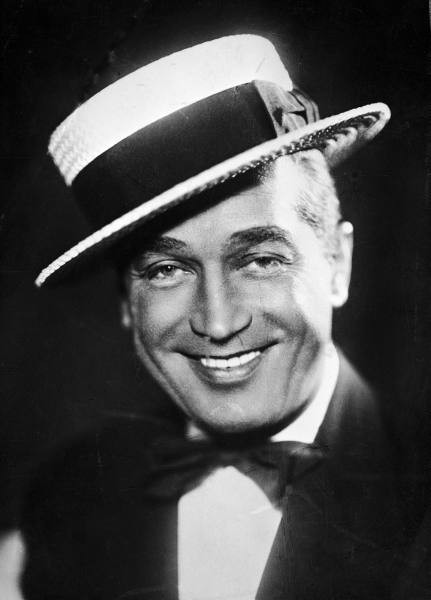 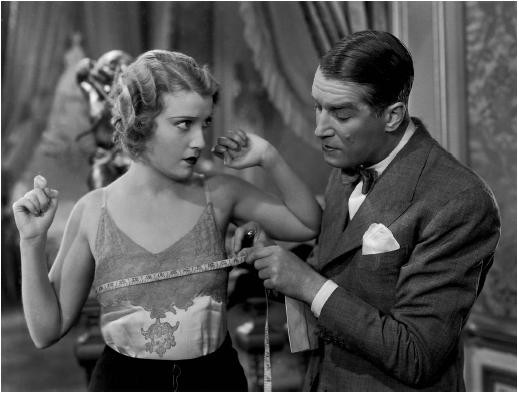 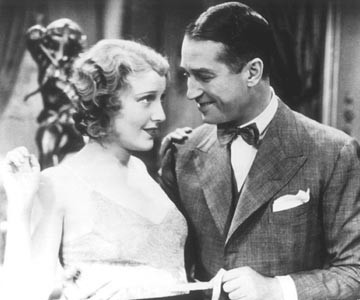 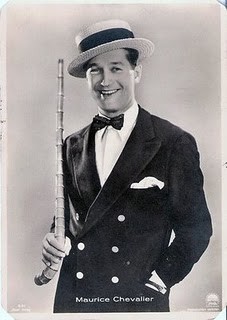 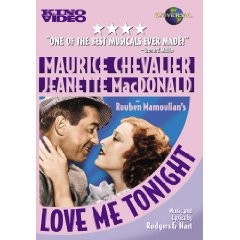 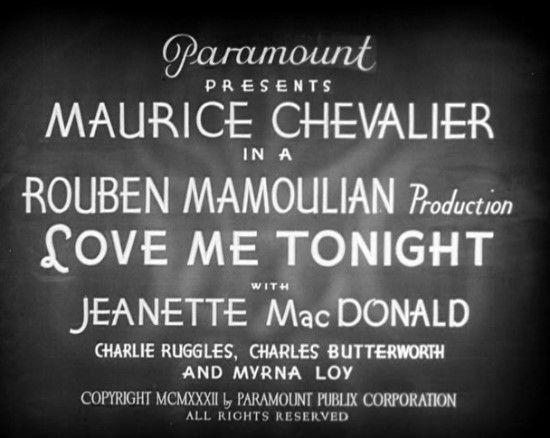 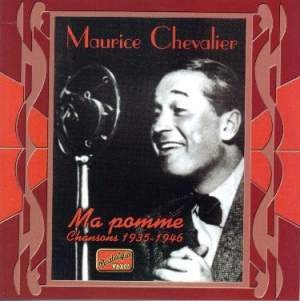 Maurice Auguste Chevalier (September 12, 1888 – January 1, 1972) was a French actor, singer, and popular vaudeville entertainer. Chevalier's signature songs included "Louise", "Mimi", and "Valentine". His trademark was a boater hat, which he always wore on stage with his tuxedo.

He was born in Paris to a house painter father and mother of Belgian descent. He made his name as a star of musical comedy, appearing in public as a singer and dancer at an early age.

He began working in show business in 1901. He was singing, unpaid, at a café when a member of the theatre saw him and suggested he try for a local musical. He got the part. Chevalier made a name as a mimic and a singer. His act in l'Alcazar in Marseille was so successful, he made a triumphant rearrival in Paris.

In 1909, he became the partner of the biggest female star in France, Fréhel. However, due to her alcoholism and drug addiction, their liaison ended in 1911. Chevalier then started a relationship with 36-year-old Mistinguett at the Folies Bergère; they eventually played out a public romance.

When World War I broke out, Chevalier was in the middle of his national service, already in the front line, where he was wounded by shrapnel in the back in the first weeks of combat and was taken as a prisoner of war in Germany for two years. In 1916, he was released through the secret intervention of Mistinguett's admirer, King Alfonso XIII of Spain, the only king of a neutral country who related to both the British and German royal families.

In 1917, Chevalier became a star in le Casino de Paris and played before British soldiers and Americans. He discovered jazz and ragtime and started thinking about touring the United States. In the prison camp, he studied English and had an advantage over other French artists. He went to London, where he found new success, even though he still sang in French.

After the war, Chevalier went back to Paris and created several songs still known today, such as "Valentine" (1924). He played in a few pictures and made a huge impression in the operetta Dédé. He met the American composers George Gershwin and Irving Berlin and brought Dédé to Broadway in 1922. The same year he met Yvonne Vallée, a young dancer, who became his wife in 1927.

Douglas Fairbanks offered him star billing with Mary Pickford, but Chevalier doubted his own talent for silent movies (in Paris, he'd made a couple that failed). When sound arrived, he returned to Hollywood in 1928. He signed a contract with Paramount Pictures and played his first American role in Innocents of Paris. In 1930 he was nominated for the Academy Award for Best Actor, for two roles, The Love Parade (1929) and The Big Pond (1930). The Big Pond gave Chevalier his first big American hit songs, "Livin' In the Sunlight - Lovin' In the Moonlight" with words and music by Al Lewis and Al Sherman, plus "A New Kind of Love" (or "The Nightingales").[1] He collaborated with film director Ernst Lubitsch. He appeared in Paramount's all-star revue film Paramount on Parade (1930).

While under contract with Paramount, Chevalier's name was so recognized that his passport featured in the Marx Brothers film Monkey Business (1931). In this sequence, near the end of the film, each brother uses Chevalier's passport, and tries to sneak off the ocean liner where they were stowaways by claiming to be the singer—with terrible renditions of "You Brought a New Kind of Love to Me" with its line "If the nightingales could sing like you". In 1931, Chevalier starred in a musical called The Smiling Lieutenant with Claudette Colbert and Miriam Hopkins. Despite the disdain audiences held for musicals in 1931,[2] it proved a successful film.[3]

In 1932, he starred with Jeanette MacDonald in Paramount's film musical, One Hour With You which became a success and one of the films instrumental in making musicals popular again. Due to its popularity, Paramount starred Maurice Chevalier in another musical called Love Me Tonight (also 1932), and again co-starring Jeanette MacDonald. It was about a tailor who falls in love with a princess when he goes to a castle to collect a debt and is mistaken for a baron. Featuring songs by Richard Rodgers and Lorenz Hart, it was directed by Rouben Mamoulian, who, with the help of the songwriters, was able to put his ideas of the integrated musical (a musical which blends songs and dialogue so the songs advance the plot). It is considered one of the greatest film musicals of all time.[2] 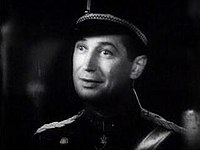 In 1934, he starred in the first sound film of the Franz Lehár operetta The Merry Widow, one of his best-known films. In 1935, he signed with MGM and returned to France later that year.

During his years in Hollywood, Chevalier had a reputation as a penny-pincher. When filming at Paramount, he balked at parking his car in the Paramount lot at ten cents a day. After bargaining, he managed to get five cents per day. Another story is told of Chevalier (a smoker) having a conversation with someone who offered him a cigarette. He took it, said "Thank you", put it in his pocket, and continued with the conversation. But in Hollywood he seemed to be a divided character. When not playing around with young chorus-girls, he actually felt quite lonely, and sought the company of Adolphe Menjou and Charles Boyer, also French, but both much better educated than Chevalier. Boyer in particular introduced him to art galleries and good literature, and Chevalier would try to copy him as the man of taste. But at other times, he would 'revert to type' as the bitter and impoverished street-kid he basically was. When performing in English, he always put on a heavy French accent, although his normal spoken English was quite fluent and sounded more American.

In 1937, he married the dancer Nita Ray. He had several successes, such as his revue Paris en Joie in the Casino de Paris. A year later, he performed in Amours de Paris. His songs remained big hits, such as Prosper (1935), Ma Pomme (1936) and Ça fait d'excellents français (1939)

In 1941, he performed a new revue in the Casino de Paris: Bonjour Paris, which was another success. Songs like "Ça sent si bon la France" and "La Chanson du maçon" became hits. The Nazis asked Chevalier to perform in Berlin and sing for the collaborating radio station Radio-Paris. He refused, but he did perform in front of prisoners of war in Germany at the camp where he was interned in World War I, and succeeded in liberating ten people in exchange.

In 1942 he returned to Bocca, near Cannes, but returned to the capital city in September. In 1944 when Allied forces freed France, Chevalier was accused of collaborationism. Even though he was acquitted by a French convened court, the English-speaking press remained hostile and he was refused a visa for several years.

In his own country, however, he was still popular. In 1946, he split from Nita Ray and started writing his memoirs, which took many years to complete.

He started to paint and collect and acted in Le Silence est d'Or (1946) by René Clair. He still toured throughout the United States and other parts of the world and returned to France in 1948.

In 1949, he performed in Stockholm in a Communist benefit against nuclear arms. In 1944, he had already participated in a Communist demonstration in Paris. He was therefore even less popular in the U.S. during the McCarthyism period; in 1951, he was refused re-entry into the U.S. because he had signed the Stockholm Appeal.

In 1952, he bought a large property in Marnes-la-Coquette, near Paris, and named it "La Louque", as a homage to his mother's nickname. He started a relationship in 1952 with Janie Michels, a young divorcee with three children.

In 1954, after Joseph McCarthy's downfall, Chevalier was welcomed back in the United States. The Billy Wilder film Love in the Afternoon (1957) with Audrey Hepburn and Gary Cooper was his first Hollywood film in more than 20 years.[4] Chevalier then appeared in the movie musical Gigi (1958) with Leslie Caron and Hermione Gingold, with whom he shared the song "I Remember It Well", and several Walt Disney films. The success of Gigi prompted Hollywood to give him an Honorary Academy Award that year for achievements in entertainment.

In television, Chevalier appeared on The Lucy-Desi Comedy Hour in 1958.

In the early 1960s, he toured the United States and between 1960 and 1963 made eight films. One of those films, made in 1961, was the dramatic movie Fanny, in which he starred with Leslie Caron and Charles Boyer. This film was an updated version of Marcel Pagnol's "Marseilles Trilogy." In 1965, at 77, he made another world tour. In 1967 he toured in Latin America, again the US, Europe and Canada. The following year, on October 1, 1968, he announced his farewell tour.

In 1970, he sang the title song of the Disney film The Aristocats.

Maurice Chevalier died in Paris, on January 1, 1972, aged 83, and was interred in the cemetery of Marnes-la-Coquette in Hauts-de-Seine, outside Paris, France.

Chevalier has a star on the Hollywood Walk of Fame at 1651 Vine Street.