This was Elizabeth Patterson's home in the early 1950's. She owned this and the property next door as well.

Meher Baba recuperated here for quite a while after his 1952 car accident in Oklahoma.

Much later the property was sold to a private concern and in 2013 Sufism Reoriented purchased this property.

The property, currently under restoration, will be considered an important part of Sufism Reoriented, as Baba worked on the Sufi Charter there daily for a month.

After staying at Meher Center for a month, Baba and the women left in two cars at 2:30 P.M. on Tuesday, 20 May 1952. Baba's itinerary was to spend nine days driving across America, and reach Meher Mount in Ojai, California, on the 29th. He was to meet Gabriel Pascal there on the 30th, Malcolm Schloss on 1 June, and go to Hollywood on the 2nd and 4th. (Pascal was putting two of his homes in Hollywood at Baba's disposal, so that Baba could meet people at his house.) The group would then leave Meher Mount for San Francisco on the 6th June, stay in San Francisco for three days (in a hotel arranged by Don Stevens), and start on their return journey to Myrtle Beach on 10 June.

On the 7th they reached Myrtle Beach, where Baba stayed in Elizabeth's house, Youpon Dunes, about eight miles south from the Center. Adi and his group had arrived the previous evening. 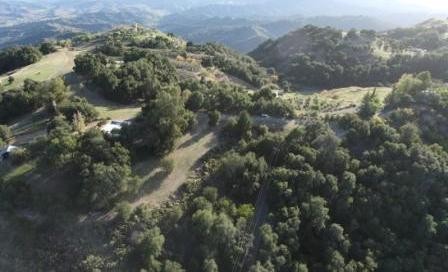 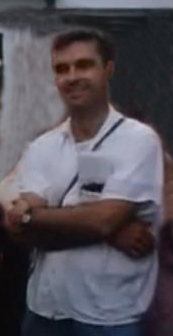 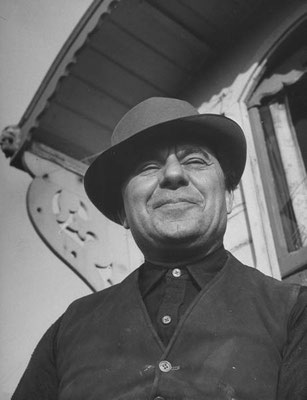 Recent images prior to the Sufi purchase 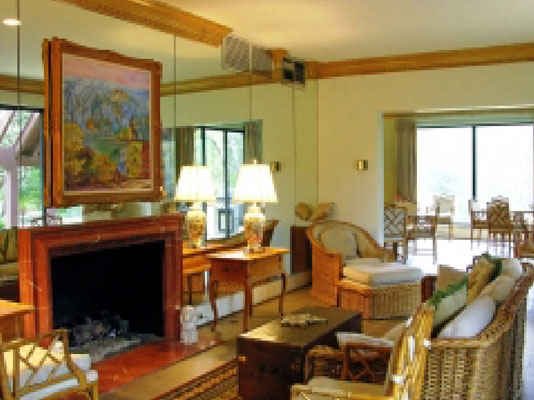 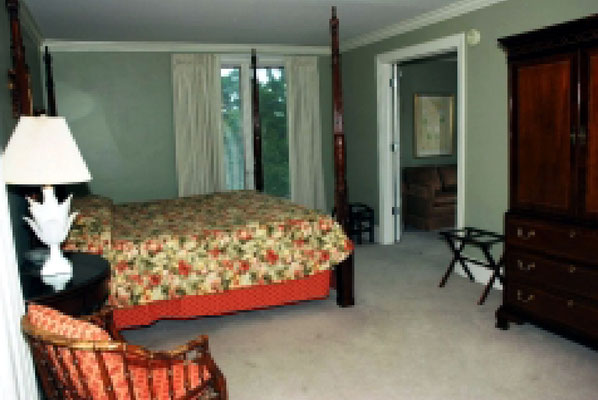 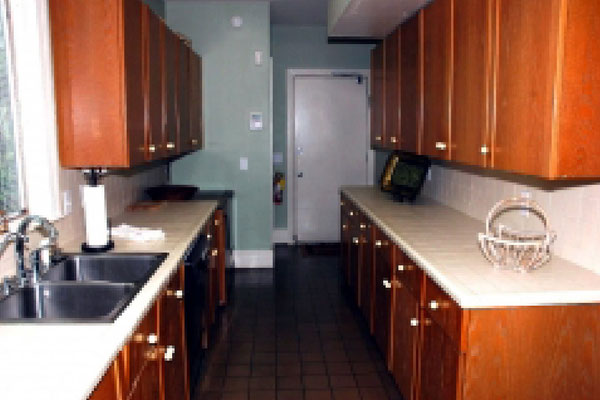 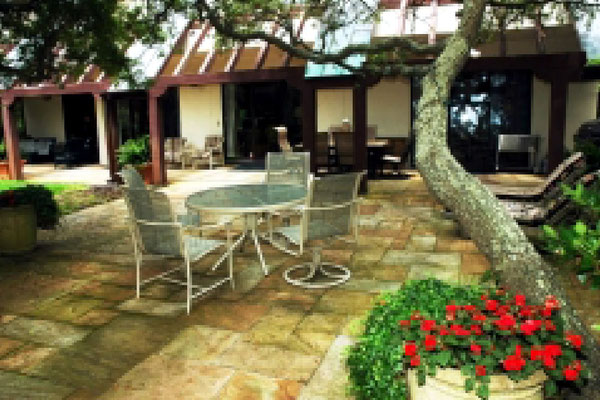 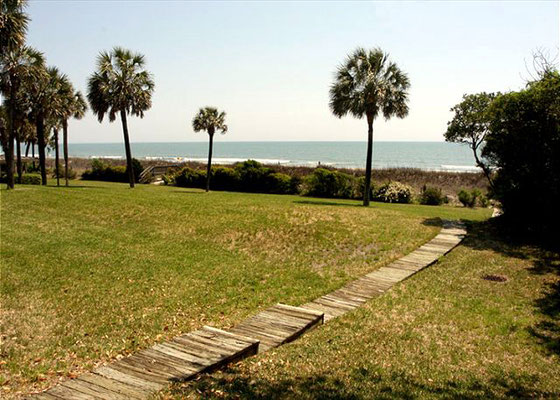 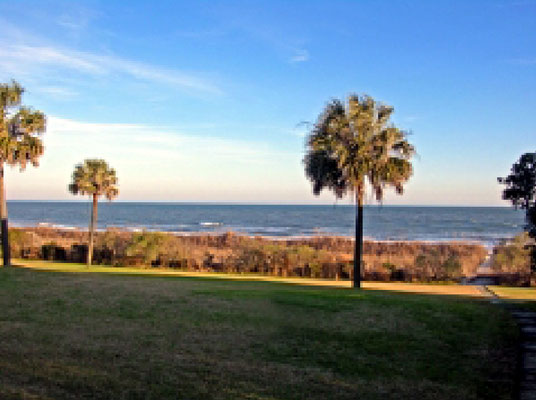 Recovering in Myrtle Beach, Baba was kept in an air-conditioned room at Youpon Dunes. The women stayed in the house with him, the men at the Center. Nilu attended Baba during the night and the others during the day. Adi gave him regular sponge baths with Meherjee's help. Meherjee would somehow contrive to make Baba eat. Kitty cooked for Baba, Bessie (Elizabeth's cook) prepared meals for the women, with Ruano's help, and the men dined out. 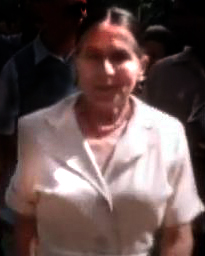 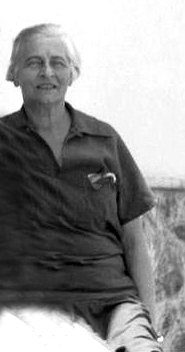 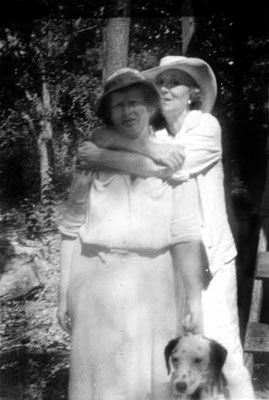 My first day for lunch at Youpon Dunes, we were all seated around the table and were chatting about different things, and towards the end of lunch, Ruano got up and walked away from the table, excusing herself. I paid no attention except to wave her goodbye. A few minutes went by and suddenly I noticed a little buzz around the table. Someone said, “How could she do that with Baba upstairs? For heaven’s sake, what is she doing? Isn’t it terrible! Baba is sleeping right upstairs!” I turned around in my chair to take a look and realized that Ruano was sitting in an easy chair in the living room, about twenty feet from the dining room table, looking very patrician, smoking a large black cigar.

In those days, ladies did not smoke cigars except in some areas of South America. So people were quite startled, and as this little buzz of criticism was going on, suddenly from upstairs we heard Mani’s feet flying down the staircase. She had a black box in her hand, and she came straight across the living room to Ruano. She stood in front of her and asked, “Ruano, Baba wants to know if you remember your promise.” Ruano said, “Yes, Mani.” “What was it?” Mani asked. “That I was only to smoke six a day,” she replied. Then Mani said, “Very good, Ruano. Baba said if you remembered your promise, He is sending you this present.” She handed her the box, and Ruano opened it, and it was full of big black cigars. Where Baba got this cigar box full of big black cigars, I have no idea. I don’t know who gave it to Him. And as far as I am concerned He may have just materialized it out of thin air, because He was transported to Myrtle Beach in an ambulance and, as far as I know, nobody had given Him a present of black cigars. Perhaps they came to Him when I was not looking. Anyway, He gave the cigars to Ruano, and that was the end of the criticism. Ruano had a delightful sense of humour. Baba used to call her His “Eagle.” You know, Baba always played with us. Sometimes He would say, “All right, Ruano. Will you make your eagle imitation?” Then Ruano would flap her wings and let out a cry just like an eagle soaring.

The following day, Friday, 20 June 1952, Baba was driven in an ambulance to Duke University Medical Center for an examination. Baba and Mehera, who was also to be examined, traveled together from Youpon Dunes to Durham in the ambulance with Goher, Don and Meherjee. Sarosh, Nilu, Meheru and Mani followed behind them in another car.

At Duke Hospital, Baba's leg cast was replaced, but the new one caused terrible itching. Baba complained to Don to tell the doctor to remove it. This was done, and another cast put on. The doctor, Lenox D. Baker, said it was against hospital policy to allow anyone to spend the night with Baba in the hospital; but after Sarosh's repeated entreaties, he made an exception. The others stayed in a motel nearby called the Dutch Inn.

After Mehera and Baba were thoroughly examined and X-rays taken, they returned to Youpon Dunes on the 24th. More X-rays of Baba were taken at the Conway Hospital a week later, on 8 July, which showed his leg fracture had healed. Nevertheless, Ivy was instructed to make multiple doctors appointments for Baba and Mehera with specialists in New York City. Don flew to London at the beginning of July to consult a renowned orthopedic surgeon there and to visit his family.

Meanwhile, on 2 July 1952, Baba paid a final visit to the Center. Mrs. Houston drove him in the morning with Mehera and Mani. Goher, Meheru, Sarosh, Meherjee, Adi Sr. and Gustadji followed in another car. They went to the Guest House, where all the gifts presented to Baba by his followers were packed and taken to Youpon Dunes.

Adi Sr. read out the proposed Sufi Charter to Baba during this period. Baba dictated a few corrections and points to be sent to Ivy to incorporate in the charter. Charmian, who had been called by Baba, arrived in Myrtle Beach on the 8th and stayed at Youpon Dunes. 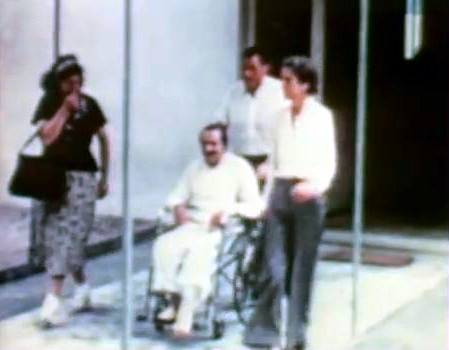 From London, Baba sent Kitty Davy back to Myrtle Beach to help Elizabeth look after Norina and the Center. Elizabeth herself was still convalescing from the car accident. One day in Youpon Dunes, while in his recovery period, Baba had asked Kitty, "Would you be willing to stay behind in Myrtle Beach and not return with us to India, but help Elizabeth?"

"Why yes, of course, Baba," Kitty had said without hesitation. Baba indicated it would be for "perhaps a year ... until I return." Thus, after staying for 15 and a half years with her Beloved ( in India ), Kitty parted company, following his orders. She was to remain in Myrtle Beach for the rest of her life.

The account found in " Mehera-Meher Pt.3 : A Divine Romance " 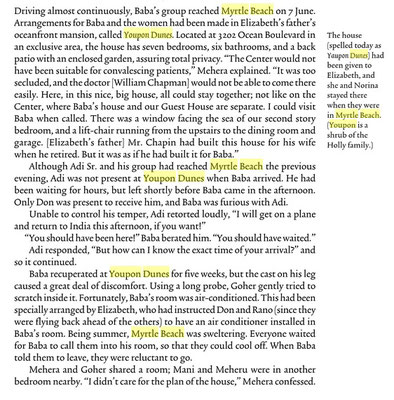 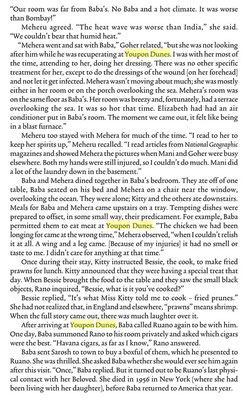 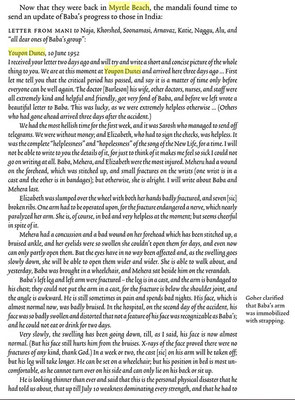 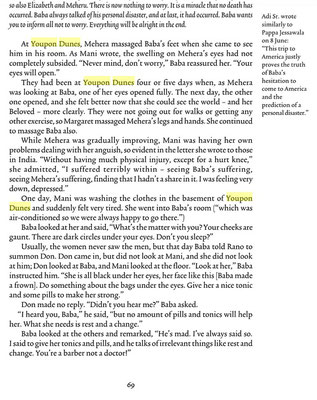 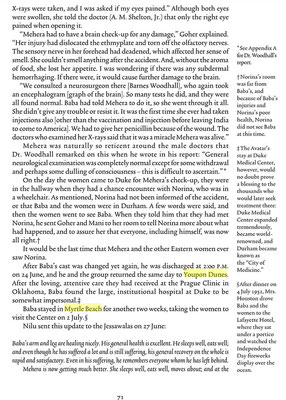 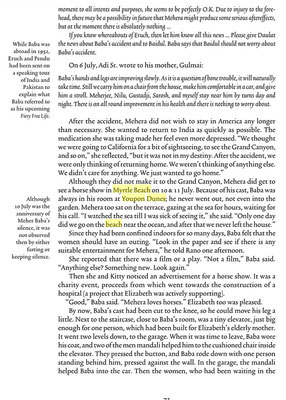 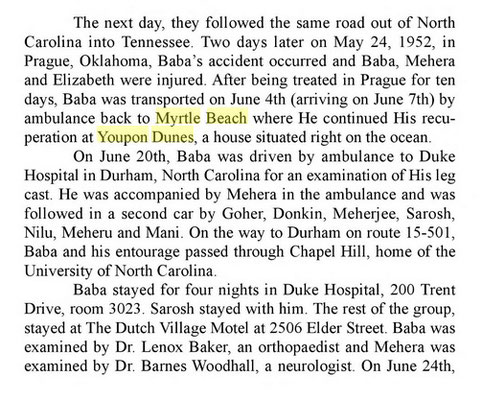 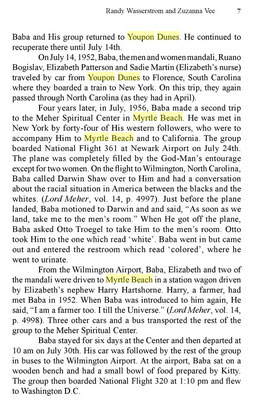 At noon on 15 June 1957, Norina Matchabelli passed away at the age of 77, in Youpon Dunes, Myrtle Beach, after prolonged heart trouble.

Norina's love, service and renunciation cannot be described. She was wholly Baba's and merged in him. Age offered its profoundest salutations to her — and the Lord of the Age sent this telegram to Elizabeth and Kitty on the 17th: "Be happy my very dear Norina has come to live with me forever." Her body was cremated and, as was Baba's wish, the ashes were sent to India and interred on Meherabad Hill. Her tombstone read: "Princess Norina  was is and will ever remain Baba's."

Before dying, Norina had told Elizabeth, "Don't grieve for me; let me go." So the evening after she died, Elizabeth and Kitty went to see a play at the local theater ( Kingston House ). At the door, they were met by the theater's owner and manager, Jane Barry Haynes, who welcomed them warmly. 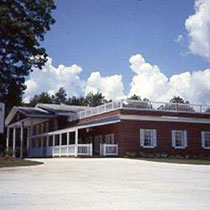 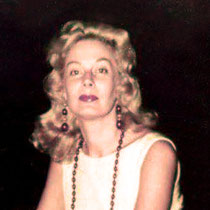 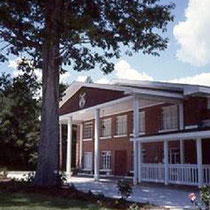