From Wikipedia, the free encyclopedia
This article is about the British Overseas Territory. For other uses, see Gibraltar (disambiguation).

Gibraltar /dʒɨˈbrɔːltər/ is a British Overseas Territory located on the southern end of the Iberian Peninsula at the entrance of the Mediterranean.[7][8] It has an area of 2.3 square miles (6.0 km2) and a northern border with the Province of Cádiz in Andalusia, Spain. The Rock of Gibraltar is the major landmark of the region. At its foot is a densely populated city area, home to almost 30,000 Gibraltarians and other nationalities.[9]

An Anglo-Dutch force captured Gibraltar from Spain in 1704 during the War of the Spanish Succession on behalf of the Habsburg pretender to the Spanish throne. The territory was subsequently ceded to Britain "in perpetuity" under the Treaty of Utrecht in 1713. It was an important base for the Royal Navy; today its economy is based largely on tourism, online gambling, financial services, and shipping.[10][11]

The sovereignty of Gibraltar is a major point of contention in Anglo-Spanish relations as Spain asserts a claim to the territory.[11] Gibraltarians overwhelmingly rejected proposals for Spanish sovereignty in a 1967 referendum and again in 2002. Under the Gibraltar constitution of 2006, Gibraltar governs its own affairs, though some powers, such as defence and foreign relations, remain the responsibility of the UK Government.

The name Gibraltar is the Spanish derivation of the Arabic name Jabal Ṭāriq (جبل طارق), meaning "Mountain of Tariq". It refers to the Rock of Gibraltar, which was named after the Umayyad general Tariq ibn-Ziyad who led the initial incursion into Iberia in advance of the main Umayyad force in 711 under the command of Umayyad Caliph Al-Walid I. Earlier, it was known as Mons Calpe, one of the Pillars of Hercules.[12] 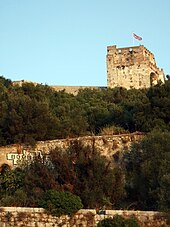 View of the northern face of the Moorish Castle's Tower of Homage. Built in the 14th century, it is the only Marinid construction outside Africa.

Evidence of Neanderthal habitation in Gibraltar between 28,000 and 24,000 BC has been discovered at Gorham's Cave, making Gibraltar the last known holdout of the Neanderthals.[13] Within recorded history, the first inhabitants were the Phoenicians, around 950 BC. Subsequently, Gibraltar became known as one of the Pillars of Hercules, after the Greek legend of the creation of the Strait of Gibraltar by Heracles. The Carthaginians and Romans also established semi-permanent settlements. After the collapse of the Roman Empire, Gibraltar came briefly under the control of the Vandals.

The area later formed part of the Visigothic Kingdom of Hispania from 414 AD until the Islamic conquest of Iberia in 711 AD.

In 1160, the Almohad Sultan Abd al-Mu'min ordered that a permanent settlement, including a castle, be built. It received the name of Medinat al-Fath (City of the Victory).[14] On completion of the works in the town, the Sultan crossed the Strait to inspect the works and stayed in Gibraltar for two months. The Tower of Homage of the Moorish Castle remains standing today. From 1274 onwards, the town was fought over and captured by the Nasrids of Granada (in 1237 and 1374), the Marinids of Morocco (in 1274 and 1333) and the kings of Castile (in 1309). In 1462, Gibraltar was finally captured by Juan Alonso de Guzmán, 1st Duke of Medina Sidonia.[15]

After the conquest, King Henry IV of Castile assumed the additional title of King of Gibraltar, establishing it as part of the comarca of the Campo Llano de Gibraltar.[16] Six years later Gibraltar was restored to the Duke of Medina Sidonia, who sold it in 1474 to a group of conversos (Christian converts from Judaism) from Cordova in exchange for maintaining the garrison of the town for two years, after which time they were expelled.[17] In 1501 Gibraltar passed back to the Spanish Crown, and Isabella I of Castile issued a Royal Warrant granting Gibraltar the coat of arms that it still uses today.

The last of Gibraltar, by Augusto Ferrer-Dalmau.

In 1704, during the War of the Spanish Succession, a combined Anglo-Dutch fleet, representing the Grand Alliance, captured the town of Gibraltar on behalf of the Archduke Charles of Austria in his campaign to become King of Spain. The occupation of the town by Alliance forces caused the exodus of the population to the surrounding area of the Campo de Gibraltar.[18][19] As the Alliance's campaign faltered, the 1713 Treaty of Utrecht was negotiated and ceded control of Gibraltar to Britain to secure Britain's withdrawal from the war. Unsuccessful attempts by Spanish monarchs to regain Gibraltar were made with the siege of 1727 and again with the Great Siege of Gibraltar (1779 to 1783), during the American War of Independence.

Gibraltar became a key base for the British Royal Navy and played an important role prior to the Battle of Trafalgar and during the Crimean War of 1854–56, due to its strategic location. Its strategic value increased with the opening of the Suez Canal, as it lay on the sea route between the UK and the British Empire east of Suez. In the later 19th century there were major investments in improving the fortifications and the port.[20]

During World War II, Gibraltar's civilian population was evacuated (mainly to London, England, but also to parts of Morocco, Madeira and Jamaica) and the Rock was strengthened as a fortress. Spanish dictator Francisco Franco's reluctance to allow the German Army onto Spanish soil frustrated a German plan to capture the Rock, codenamed Operation Felix. In the 1950s, Franco renewed Spain's claim to sovereignty over Gibraltar and restricted movement between Gibraltar and Spain. Gibraltarians voted overwhelmingly to remain under British sovereignty in the Gibraltar sovereignty referendum, 1967, which led to the passing of the Gibraltar Constitution Order in 1969. In response, Spain completely closed the border with Gibraltar and severed all communication links.[21] The border with Spain was partially reopened in 1982 and fully reopened in 1985 prior to Spain's accession to the European Community.

In a referendum held in 2002, Gibraltarians rejected by an overwhelming majority (98%) a proposal of shared sovereignty on which Spain and Britain were said to have reached "broad agreement".[22][23] The British government has committed itself to respecting the Gibraltarians' wishes.[24] A new Constitution Order was approved in referendum in 2006. A process of tripartite negotiations started in 2006 between Spain, Gibraltar and the UK, ending some restrictions and dealing with disputes in some specific areas such as air movements, customs procedures, telecommunications, pensions and cultural exchange.[25] 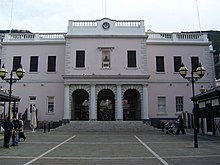 Under its current constitution, Gibraltar has almost complete internal democratic self-government through an elected parliament,[26][27][28][29] elected for a term of up to four years. The unicameral parliament presently consists of seventeen elected members, and the Speaker who is not elected, but appointed by a resolution of the parliament.[30] The government consists of ten elected members. The head of state is Queen Elizabeth II, who is represented by the Governor of Gibraltar. The governor enacts day-to-day matters on the advice of the Gibraltar Parliament, but is responsible to the British Government in respect of defence, foreign policy, internal security and general good governance. Judicial and other appointments are made on behalf of the Queen in consultation with the head of the elected government.[31][32][33][34][35][35][36]

The 2011 election was contested by the Gibraltar Social Democrats (GSD), Gibraltar Socialist Labour Party (GSLP)-Gibraltar Liberal Party (GLP) Alliance and the Progressive Democratic Party (PDP). The PDP is a new party, formed in 2006 and fielded candidates in the 2007 election, but none were elected. The head of government is the Chief Minister (as of December 2011, Fabian Picardo). All local political parties oppose any transfer of sovereignty to Spain, instead supporting self-determination. The main UK opposition parties also support this policy and it is UK Government policy not to engage in talks about the sovereignty of Gibraltar without the consent of the people of Gibraltar.[37]

Gibraltar is part of the European Union, having joined through the European Communities Act 1972 (UK), which gave effect to the Treaty of Accession 1972, as a dependent territory of the United Kingdom under what was then article 227(4) of the Treaty Establishing the European Community covering special member state territories, with exemption from some areas such as the Customs union and Common Agricultural Policy. The treaties relating to coal, steel, agriculture, and fisheries do not apply simply because Gibraltar does not produce any of those resources. After a ten-year campaign for the right to vote in European elections, since 2004 the people of Gibraltar have participated in elections for the European Parliament as part of the South West England constituency.[38] 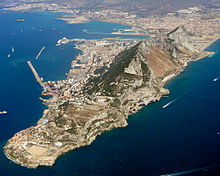 Gibraltar from the air, looking north-west.

Gibraltar's territory covers 6.843 square kilometres (2.642 sq mi) and shares a 1.2-kilometre (0.75 mi) land border with Spain. The town of La Línea de la Concepción, a municipality of the province of Cádiz, lies on the Spanish side of the border. The Spanish hinterland forms the comarca of Campo de Gibraltar (literally "Countryside of Gibraltar"). The shoreline measures 12 kilometres (7.5 mi) in length. There are two coasts ("Sides") of Gibraltar: the East Side, which contains the settlements of Sandy Bay and Catalan Bay; and the Westside, where the vast majority of the population lives. Gibraltar has no administrative divisions but is divided into seven Major Residential Areas.

Having negligible natural resources and few natural freshwater resources, limited to natural wells in the north, until recently Gibraltar used large concrete and/or natural rock water catchments to collect rainwater. Fresh water from the boreholes is supplemented by two desalination plants: a reverse osmosis plant, constructed in a tunnel within the rock, and a multi-stage flash distillation plant at North Mole.[41]

Gibraltar's terrain consists of the 426-metre (1,398 ft) high Rock of Gibraltar[42] made of Jurassic limestone, and the narrow coastal lowland surrounding it. It contains many tunnelled roads, most of which are still operated by the military and closed to the general public.

The Bay of Algeciras and La Linea, seen from the Rock
Close