While the meetings were occurring in Meherabad, Ramchandra Gadekar brought Jagannath Keshav Rangole, Laxman and Kisan Thade, Madhusudan Yellapa Pund, Krishna Bundellu and one other man to Ahmednagar from Poona. Adi Sr. informed Baba, but Baba did not permit darshan. All had found out about Baba through Gadekar. Rangole, 26, and Madhusudan, 16, were coming to meet Baba for the first time. Rangole had recently undergone surgery and was forbidden by the doctor to walk. But he did not take rest and, out of his longing, came to Ahmednagar to kiss the Master's feet. Baba, however, did not allow the men to see him. Although they had no heart to go against his wish, they longed to meet him, if only for a moment.

During the appointed meeting days, early in the morning Baba would be driven to Meherabad sometimes by Eruch in the Buick and sometimes by Adi Sr. in the blue Chevrolet. In the evening he returned to Meherazad. The Poona group thought that after coming all this way, it would not be wrong if they stood on the side of the road and waited to have a glimpse of Baba as he passed in the car.

On the evening of 21 August 1949 at 7:15 P.M., while Baba was returning to Meherazad, he saw the group standing by the road. He asked Adi about them, and Adi told him who they were. Baba had Adi stop the car. He called the lucky group and they came running. In his joy, Rangole totally forgot the doctor's orders and stood up and rushed after the others toward Baba.

Madhusudan had had a vivid dream the night before. In it he saw a woman and asked her, "Do you know where God is?"

"Do you want to see God in human form?"

"Yes, but there is a condition. Once you visit Him you will not be able to go back. So, go and take permission from your mother and father, and then come."

The dream continued, and he saw a form surrounded by a tremendous light. As soon as Baba's car drove up, Madhusudan saw the same beautiful light enveloping the exact form he had seen in his dream. He fainted. His friends brought him to Baba, who put his hand on Madhusudan's head and gestured, "I know you. I love you."

After expressing his pleasure at meeting all of them, Baba left within two minutes for Meherazad. Although it was a brief meeting, each returned to Poona completely satisfied.

Madhusudan, in that short time, gained a remarkable gift from Baba — the gift of music. He became a composer and singer of devotional songs in Baba's praise, though prior to his meeting with Baba he had been a skeptic. "Who can understand how such gifts are given by the Lord?" Age pondered. "Without asking, Madhusudan received Baba's prasad, and the echo of his songs for the Beloved are now heard around the world."

Having finished his mast work in Bombay, Baba and his companions returned to Mahabaleshwar on Wednesday, 6 December 1950........

The Thade family was especially drawn to Baba, and bhajan singing was held weekly at their residence.

Madhusudan, a superb singer, was a regular member and had started composing and singing bhajans about Baba. Subhadra Bundellu was also a fine singer, and the Thade family would join them in accompaniment. Three brothers — Laxmikant, Kishan and Narendra Thade — their parents and others such as Bapusaheb Shinde, Laxman Kamble, Rangole, Bade, Narayan and Krishna Bundellu, and a young man, Pratap Ahir were part of the bhajan group. The group was directed by Gadekar and his wife Gunatai; and their children, Digambar and Nalini, also sang. The Poona bhajan group hoped to sing bhajans before Baba one day, like Rustom Kaka and his wife Silla Kaku of Ahmednagar, who used to sing on special occasions in Meherabad and Meherazad.

On his return to Mahabaleshwar, Baba asked for a photograph of each member of the Poona bhajan group. Pointing to Madhusudan's and Narendra Thade's pictures, Baba remarked, "I will keep these two with me for some days."

Baba invited the entire Poona bhajan group to Mahabaleshwar to perform on Mehera's birthday that year. A week before this program, Khak Saheb handed Thade a song he had written, saying, "If you get a chance, the group might sing this song before Baba." A few days later, on 23 December 1950, Khak Saheb passed away in Poona at the age of 64.

Khak Saheb had been with Meher Baba since the early days of Manzil-e-Meem, where he and Asar Saheb had written Upasni Maharaj's biography in Urdu. Khak had stayed with Baba for long periods in Toka, Bangalore and Meherabad. Although because of his age he had not been able to join Baba on the New Life, he held fast to him until the last. From Meherabad, he had gone to live with his family in Poona.

When Ghani read the song Khak Saheb had written, he too gave the group a song to sing before Baba. The Poona group attended Khak's funeral and then left for Mahabaleshwar the next day, the 24th. They met Baba that evening, and each in the group sang individually for him in a small room.

Mehera's birthday was celebrated in Mahabaleshwar on Christmas Day, Wednesday, 25 December 1950. Kitty and Rano were also invited to attend this program and thus spent their Christmas holiday with Baba.

Madhusudan and members of the bhajan mandali sang devotional songs that day, and then the Song of the New Life. On hearing the latter, Baba commented: "To live up to this New Life song is the success I am seeking in the role of being the humblest and lowest of beings, full of weaknesses and defects [shortcomings]. Whatever you sing now will be addressed to the Old Life Meher Baba and not to me, as I can't accept it in this New Life".

"But you may sing bhajans with all your heart, full of love and faith."

Baba continued to listen to bhajans and ghazals for some time, and Padri took many photographs of Baba's expressions while listening to the music. The women companions were listening behind a curtain in another room. Baba was in such a good mood, he even accompanied the group by playing the dholak (drum) and finger cymbals.

( *** see photo of Meher Baba above which was taken on this day. He had joined in playing in the musical celebrations. )

Gadekar wanted to tell Baba about Khak Saheb's recent death, but because of the New Life restrictions against mentioning any such Old Life topic, he could not do so. But he hit upon a stratagem by telling Madhusudan to sing the particular ghazal to Baba that Khak had written before he passed away.

Madhusudan and the group continued to sing, and at one point sang the particular ghazal of Khak Saheb's that Gadekar had requested. Hearing just two lines, Baba stopped Madhusudan and became quiet for some moments. He looked as if he were somewhere else, far away. As Baba sat absolutely still with a pensive expression, everything in the world seemed to have stopped for the moment.

After a few moments, Baba rubbed his face and eyes, and gestured, "He [meaning Khak] has come to me." Although Baba had not mentioned Khak Saheb by name, the Poona group knew whom he meant. Then Madhusudan and the group resumed their singing, and sung the entire ghazal. Baba seemed to be in a serious mood as he listened.

"Who has composed this ghazal?" Baba asked.

"Just a few days before he died," Gadekar replied solemnly. This was the news he wished to convey to Baba. 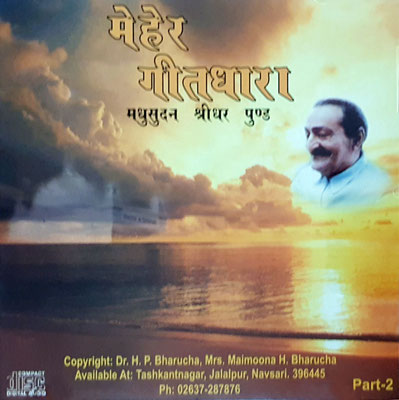 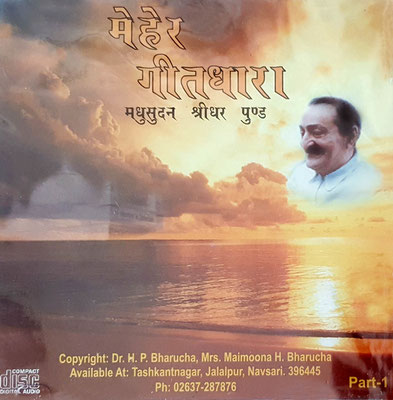