Check out the writers page for John on this web site : John de Matteis

Born in Brooklyn, John DeMatteis graduated from Midwood High School and Empire State College. He worked as a music critic before getting his start in comic books at DC Comics in the late 1970s. He contributed to the company’s line of horror comics. He began writing for Marvel Comics in 1980 on The Defenders, and had a lengthy run on Captain America, paired with penciler Mike Zeck. 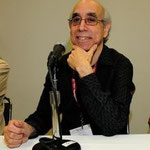 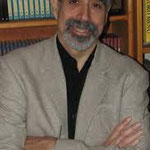 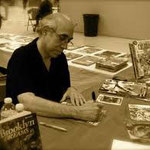 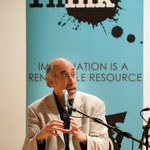 John Marc DeMatteis is an American writer of comic books. A follower of the Indian guru Meher Baba, DeMatteis is known both for infusing superhero comics with spiritual concerns, and for his witty, humorous touch.

He began as a music critic before turning to comics. Getting his start at DC Comics in the late 1970s, DeMatteis was a prolific contributor to the company's line of horror comics. He began to work at Marvel Comics during the late 1970s and early 1980s. His first work was on Marvel's "non-team" team book The Defenders, and he also had a lengthy run on Captain America (paired with penciller Mike Zeck).

DeMatteis also wrote a graphic novel, Moonshadow, for Marvel's Epic line during this time. Illustrated by artist Jon J. Muth, this story of an enlightened child may be his most personal work.

Moving back to DC, DeMatteis took over from Gerry Conway as the writer of Justice League of America. When that title was cancelled in the wake of the Crisis on Infinite Earths, DeMatteis stayed as it was relaunched as Justice League International, scripting over the plots of Keith Giffen.

JLI took a bunch of second-string DC characters - Martian Manhunter, Blue Beetle, Booster Gold, Mister Miracle, Captain Atom, Power Girl, et. al. - and turned the then-current preoccupation with "grim 'n' gritty" superheroes on its head. It emphasised the sheer absurdity of a bunch of people with strange powers, wearing day-glo costumes, running around fighting evil doers. While the Justice League had its serious side and often faced the usual universe-threatening villains, it also featured such characters as G'nort, the worst Green Lantern in the corps; Mr. Nebula, the interplanetary decorator; the Injustice League, a bunch of bumbling losers; and a flock of vampire penguins.

Paradoxically, by not taking their characters seriously, DeMatteis and Giffen made them seem much more "human" and well-rounded than the usual superheroes.

DeMatteis stayed with JLI for five years, often scripting its spin-offs (such as a Mister Miracle solo title, or a European branch of the Justice League). He returned to Marvel in the mid 1990s, working on characters such as Doctor Strange, Spider-Man, Daredevil, Man-Thing, and the Silver Surfer. He continues to work for DC, contributing tales about Superman, Batman and Wonder Woman to various titles; redefining The Spectre, through the character of Hal Jordan, as a spirit of redemption rather than of vengeance; and in 2003 he and Giffen revived the JLI for a new mini-series, Formerly Known as the Justice League.

Also a musician, J.M. DeMatteis released one album in the late 1990s.