Baba greeting Larry and Annarosa Karrasch at a dinner reception for Baba given at Longchamps restaurant;  Eruch is next to Baba, Elizabeth and John Bass seated are greeted by Annarosa's husband Theo. 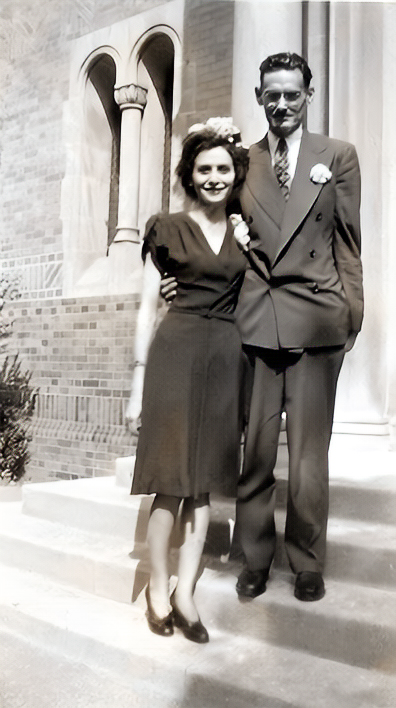 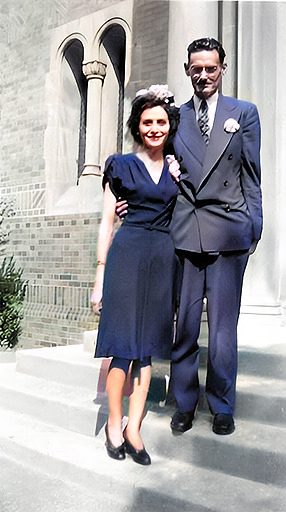 During Baba's visit to New York, many of the Sufis came in his close contact, including Hans Ludwig ("Lud") Dimpfl and his family, Joseph Harb, and Annarosa Karrasch, 47, (who had met Baba in Myrtle Beach, along with her family.

In addition, Baba also gave his touch to others, such as Jean Adriel (who, because she had been ill, had not been able to come to Myrtle Beach),  Barbara Mahon, Beryl Williams and Evelyn Blackshaw. Dr. Audrey Kargere, who first heard of Baba through Norina in the late 1940s in New York, came with her fiancé, Prince Robert Von Brancovan.

At one o'clock in the afternoon, Baba came down the elevator. Jeanne Shaw was waiting there, and Baba took her hands and allowed her to kiss his cheek. She was given some of Baba's clothes to wash. Baba went to the rooms on the mezzanine reserved for giving interviews, which had been beautifully decorated by Jeanne. On a divan (belonging to the hotel) procured by Energy's husband, Harry "Mickey" A. Florsheim, a beautiful white spread (belonging to Annarosa Karrasch) was placed and then banked with flowers. For prasad, a bowl of seedless Thompson grapes had been placed by Baba's divan.

It was still raining and the second group of women came somewhat late. Baba gave each of them a gift, to some handkerchiefs and to others something else. He asked Anna Karrasch, "Where is the little lover?" meaning her son Larry.

She asked, "Did you want me to bring him?" Baba shook his head, then reached over to a tray of gifts and felt among them. Finally he pulled out a small snuff box, remarking it was filled with his love, and handed it to Annarosa for her to give to her son.

After each woman had received a gift from Baba's hands, they left, their hearts filled with gratitude.

Larry Karrasch tells a wonderful story about this gift to him. 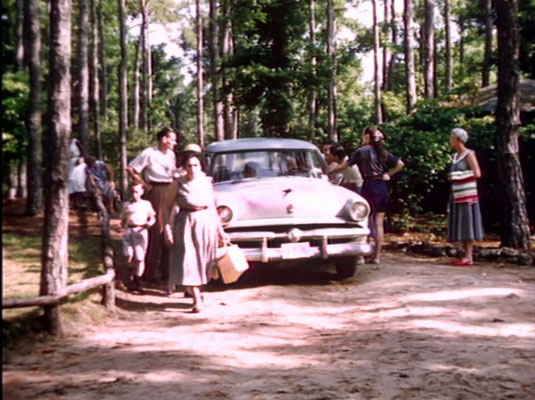 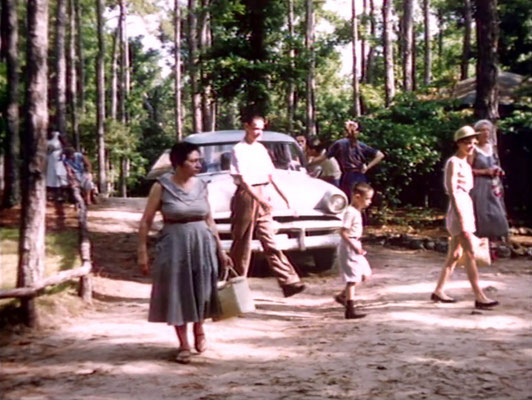 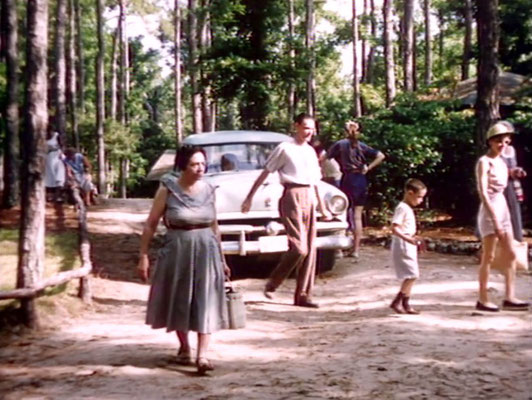 In this photo at the Myrtle Beach Center ,Baba is holding Larry Karrasch's hand, his mother Annarosa standing next to him, with Eruch and Adi K looking on.

Harold Rudd has Raphael on his shoulders with Virginia looking at them. 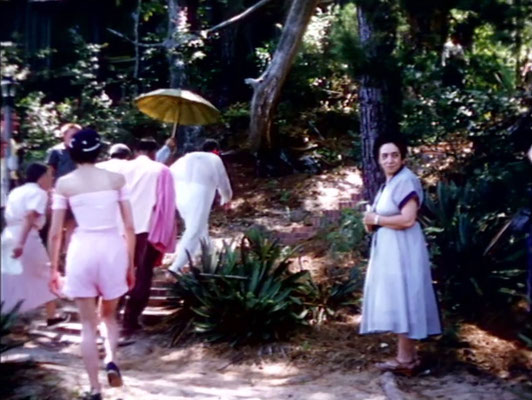 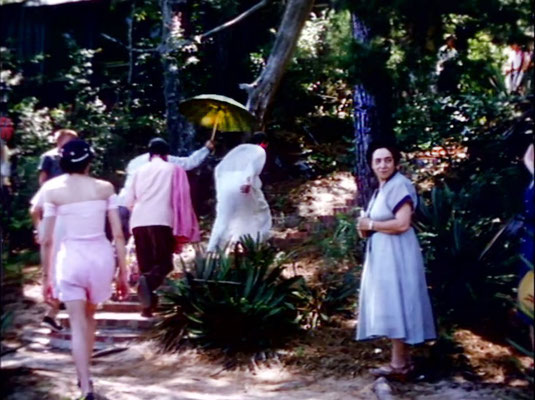 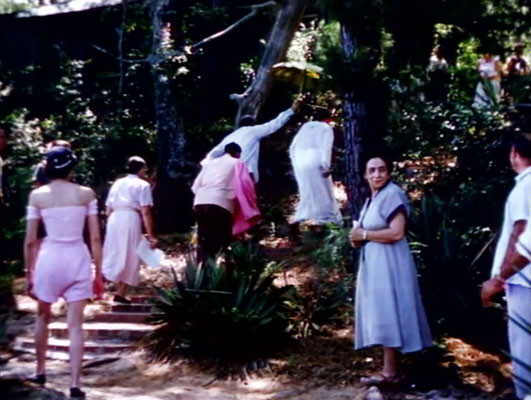 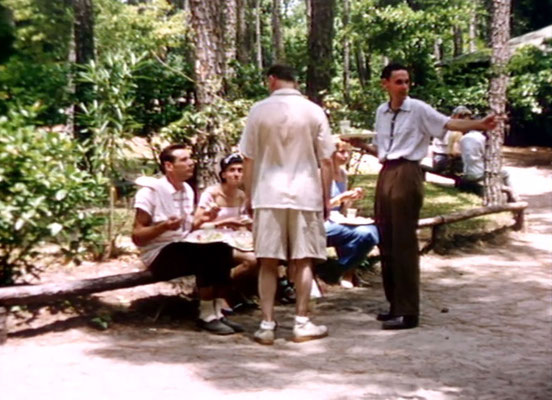 Afterwards, Baba had this message cabled to Kenmore:

I have canceled the December sahavas.

I want you not to feel disappointed or disturbed for I know what I am doing. I also know how you and Annarosa [Karrasch] have labored and done your utmost to make possible for a large number of my lovers to see me. I am very pleased and proud of you. Remain happily resigned to my will and pleasure. 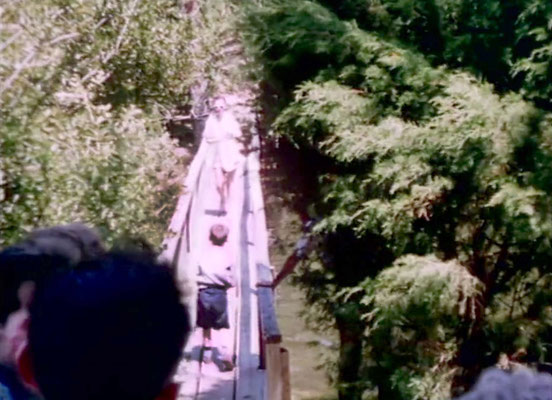 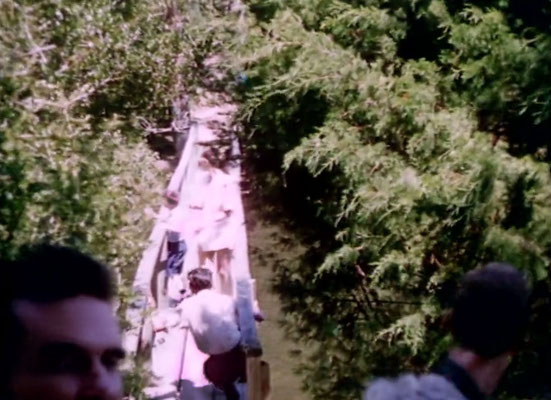 Although the sahavas was cancelled, there was no doubt that the combined energy given out by each who labored toward it, and the resultant concentration centered on Baba in the planning of it were used by him for his Universal work. In answer to his telegram sent throughout the world on September 4th, replies were wired back of the Westerners' humble and wholehearted acceptance of Baba's decision. Baba was touched and pleased with their responses and as some consolation to his lovers, despite the strict ban on correspondence, on September 8th, through Mani's Family Letter, he instructed her to write: "Baba wishes each of his Western lovers, old and new, young and old, men, women and children, to write one letter direct to him."

That year, there was no mention of a fast in lieu of keeping silence. Also, according to Baba's instructions, it was the first time that Silence Day was publicly celebrated in New York City at the Barbizon Plaza Hotel. The program on 16 July was organized by Harry Kenmore with the help of Annarosa Karrasch, John Bass, Fred and Ella Winterfeldt, and others.

When Harry Kenmore was invited to visit Baba in November of 1968, he brought with him a bound copy of the Family Letters which had been sent by Mani up until that time. Baba held it on His lap and expressed His pleasure with it and said that Harry should make enough for everybody. Harry said, "But Baba, we would have to make 1000", and Baba said yes.

So, after Baba's passing and after Mani had sent the last Family Letter, Harry and Annarosa Karrasch went ahead and had 1000 made. Rano Gayley gave a drawing for the frontispiece. Many Baba quotes are included here that cannot be found elsewhere.
Published 1976.