Virginia Rudd chaired the English Department at Rutgers University in New Jersey. She had worked with the well-known scholar of mythology, Joseph Campbell, and was one of the first to develop college-level courses in mythology. Her husband, Harold Rudd, was a professional actor who also served for the time as secretary to the famous film producer, Gabriel Pascal.

In the years after World War II, Harold Rudd was drawn to meet many international figures who came to the United States representing diverse spiritual and political movements. Virginia often accompanied her husband to these meetings, though she herself had little interest in them. She was especially uninterested in gurus, who were more suspect than political extremists. Finally, she exhausted her patience and announced that she would attend no more meetings. At just this time, Harold learned of a new guru visiting from India. He talked her into seeing this one last figure. He even talked her into traveling all the way to South Carolina, which she considered a foreign country.

Virginia had no wish to meet another guru. Her life and interests included no room at all for such a figure. However, as soon as she entered the room to see Meher Baba, she was lost in a golden cloud of bliss that permeated every cell of her being, that answered every question about existence and its purpose, that reverberated through her with such wondrous insistence that she felt she had achieved the goal of life. She never even saw Meher Baba sitting there. Later she learned he had put her on his lap and cuddled her, but she has no memory of that. The next thing she knew, she was sitting on a bench behind the barn, several hours later.

That was in May, 1952. A few months later, Virginia met Meher Baba again, in Murshida Duce's apartment in New York. This time she was able to see Meher Baba clearly and converse with him.

In this photo at Myrtle Beach,Baba is holding Larry Karrasch's hand with Eruch and Adi K looking on.

Harold Rudd has Raphael on his shoulders with Virginia looking at them.

In this photo at Myrtle Beach, Baba is embracing and kissing Wendy Connor with Eruch looking on.

Harold Rudd has Raphael on his shoulders.

Among the crowd were several expectant mothers. One was Virginia Rudd. She rubbed her tummy with a happy smile. When she came to see Baba, he rubbed his tummy in exactly the same way with a twinkle in his eye, although he could not have seen her! He blessed the child within her.

Later that night, there was a terrific electric storm. Bolts of lightning plunged into the lake, similar to the storms experienced during Baba's first visit to Myrtle Beach.

ON THE MORNING of July 26th, Baba walked to the Guest House and was greeted by five of the women staying in the nearby Lantern Cabin: Filis Frederick, Adele Wolkin, Bili Eaton, Beryl Williams and Sylvia Gaines. Baba appeared tired, and Ivy Duce said, "Baba, you worked all night ..."

Baba put his hands to his head in an anguished way and said, "Yes, I worked all night. You have no idea. I have the burden of the universe on my head. I am very unhappy this morning."

On the way to the kitchen, Baba paused at the boathouse. Harold and Virginia Rudd had camped out in it, and Baba asked if they had slept well and if they had been afraid of the lightning. They answered they were fine and did not want to move to another location.


Virginia Rudd was pregnant, and when Baba saw her and her husband, Harold (an aspiring actor), in the Lagoon Cabin he rubbed his own belly as if to say he understood Virginia's condition completely. Pointing at Harold, he teased, "He didn't do this. I did!" A few days later, Baba told some of his lovers, "I searched all over before I selected this soul to come to them."

On another occasion, when Harold and Virginia Rudd were in the Lagoon Cabin with a few others, Baba waited a while in silence until all were there and had gathered quietly. He then pointed to Harold and said, "I love Virginia very much. Are you not jealous?" Harold only smiled.

Baba, however, persisted in this line of questioning. "Are you sure you aren't jealous?" With that, Harold rushed up past people and threw himself down on the floor in front of Baba with arms outstretched and eyes closed. He shouted, "Take my life. Take it now – this instant! Take it!" Three times he repeated this, each time raising himself to speak and then lying back down.

Baba said very seriously, "I know everything. I know that Harold is not play acting. People think that Harold is acting, but Baba knows better." He called Virginia, made the couple embrace in his presence, and then soon after dismissed everyone.

On his way to the kitchen, Baba asked if Adele, Bili, Beryl and Filis had written yet to Mehera and the women mandali in India. Again, he stopped by the boathouse and asked Harold and Virginia Rudd if they had slept well.

Each day, morning sessions were reserved for the Westerners. At 9:00 A.M., several buses arrived and 144 Western men and women entered the hall of Guruprasad to meet their Beloved. Baba was dressed in a white sadra and pink coat, and the rays of his smile filled the room. His smile was radiant as he met his lovers, and his glance penetrated every heart. Virginia Rudd asked Baba how he had slept. Baba replied, "I cannot go to sleep now, or I would not wake up until after seven hundred years!" 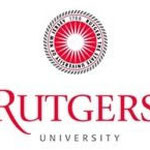 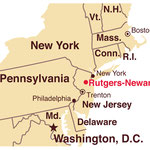 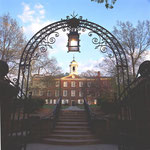 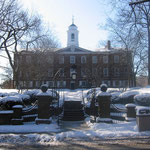 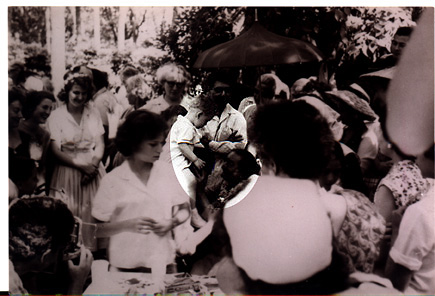 On the tape we're about to see, Virginia Rudd describes these meetings with Meher Baba and how he changed her life completely. She describes how in 1956 Meher Baba gave her a child, how Meher Baba actually ensouled the child during their meeting, and how he guided her pregnancy and the child's birth. We'll also see images of Meher Baba playing with this child at the 1958 Sahavas. The child's name, of course, is Raphael Rudd. 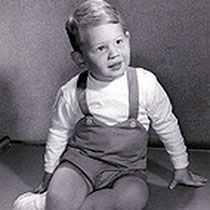 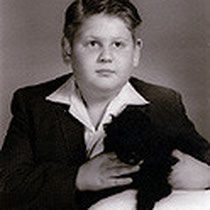 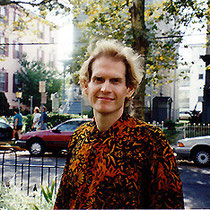 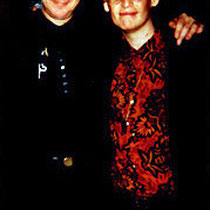 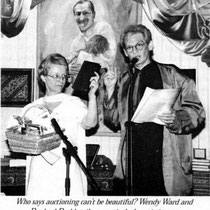 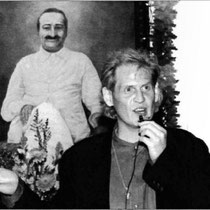 Raphael Rudd, who died Monday (April 1, 2002) at the age of 45, was a classically trained, musically adventurous pianist with a flair for the dramatic.

Drummer Joe Goldberger, a longtime friend and collaborator who attended Nutley High School with Rudd in the mid-1970s, first met Rudd after a class there.

“People were gathering around a piano,” Goldberger said. “He had some kind of jacket on with tails, I think, and he sat down at the piano and flipped the tails back. I thought, ‘Who is this guy?’”

Fans of the classic-rock band The Who undoubtedly asked the same question in October, when Rhino Records released “The Oceanic Concerts,” a CD documenting two-man concerts Rudd and Who leader Pete Townshend presented in 1979 and 1980.

“I regarded myself as Raphael’s musical mentor during that period,” Townshend wrote in the liner notes to the album. “Today, we inspire each other on a more equal footing.”

Though Rudd, a composer and harp player as well as a pianist, lived in Nutley for most of his life, he moved to Los Angeles about four years ago to work on television and film projects. He suffered multiple injuries in a Feb. 27 Los Angeles car accident and had been in a coma since then.

“There was nobody like Raphael,” said singer Annie Haslam, who employed Rudd as a member of her progressive-rock group Renaissance and her solo bands from 1987 to 1992. “He was a unique person in every form and every way.

“He was a crazy personality, even in the way that he performed. He played like a crazy man, but a crazy man in love with what he was doing. He was very electric and vibrant in his personality.”

“He played with so much heart and passion,” said Goldberger. “He just put everything he had into his performances. He’d be exhausted after he played.”

Rudd met Townshend in 1977 through their mutual interest in the Indian guru Meher Baba. He was working toward a bachelor’s degree at the Manhattan School of Music atthe time but Townshend flew him to London to help with the orchestral arrangements for the soundtrack of the movie “Quadrophenia.”

Rudd also conducted members of the London Symphony Orchestra and the London Philharmonic at sessions for the soundtrack; arranged the horns on Townshend’s 1980 hit single “Rough Boys;” worked on demos for Townshend’s 1980 “Empty Glass” album; and presented the two concerts documented in the “Oceanic Concerts” CD. These intimate shows took place at Townshend’s London studio, Eel Pie, for a few hundred invited guests — members of the Meher Baba Oceanic Centre (founded by Townshend in honor of Meher Baba) and other friends.

From 1978 to 1980, Townshend also co-produced recordings of Rudd’s own music; these tracks were combined with newer material on Rudd’s 1996 double CD “The Awakening — Chronicles.” Townshend sang on one track of this mostly instrumental album; Haslam and Phil Collins also made guest appearances.

After Rudd moved back to New Jersey in the early 1980s, he worked as an assistant professor of music at Rutgers University in Newark and performed in local venues as different as the Dirt Club in Bloomfield (where he dared to play classical music for a rock-oriented crowd) and the Oakeside-Bloomfield Cultural Center, also in Bloomfield, where he presented annual spring concerts from the late 1980s until 1997.

While there was a calm, meditative quality to many of Rudd’s compositions, he resisted the new-age label.

“‘New Age music,’ for some reason, equals an esoteric, up-in-the-clouds type of feel,” Rudd told The Star-Ledger in 1996. “I would like to be considered someone who is doing something with some guts to it. I like form, I like structure, and I like to have a beginning, a middle and an end to a piece. I get that from my classical roots.”