From New York, they then moved to Tampa, Florida and then to Indian Rocks Beach, Florida.

Stella and Ralph Hernandez shared their story of meeting Meher Baba at Meher Center in Myrtle Beach. For those of you who don’t know this much-loved couple, Stella is a hostess at Baba’s House on Sundays, giving the tour of the house. Ralph worked for many years in the Gateway and as a caretaker. Both have regularly conducted tours of the Center for visitors.

Ralph started out telling us how they first learned of Baba through Dana Field, who had attended the 1954 men’s meeting known as the Three Incredible Weeks with Baba in India. Baba had mentioned that He would be coming to the United States in 1956—to Meher Center and other places—and Dana came to St. Petersburg to tell people who might be interested in meeting Baba.

Ralph and Stella and their children were living there at that time and had recently become interested in spiritual philosophies. They were meeting in a group with other couples who were mostly reading about Catholic saints; they knew nothing of Indian religions. They had read about “cosmic consciousness” and the teachings of mystics like Joel Goldsmith, and they had a little inkling of what a master was—“but not much,” Ralph admitted. They didn’t know anything about practices like vegetarianism or celibacy, and here came Dana with his seemingly fanatical ideas about food (his own diet consisted mainly of fruits and nuts) and his reluctance to sit close to a woman. Ralph said they didn’t take him seriously and considered him a bit nutty. In later years they would joke that they had come to Baba in spite of Dana, because “when Baba wants you, He gets you!”

Dana came to the group meetings with pamphlets and pictures of Baba, and the first image that Ralph and Stella saw was the Mahabaleshwar photo of May 1954, in which Baba is leaning against a railing against a mountainous backdrop.

Stella picked up the story at the point where they were to meet Baba at the Center. She said that although she had attended the spiritual discussion group, she was so busy raising her children that she didn’t really take it seriously—it was just a pastime. She welcomed the chance to go to the Center because she hadn’t had a vacation in years. With the children being cared for by their grandparents, she figured she’d have a lot of fun in Myrtle Beach. Well, she did—but not the way she expected. “The first time I saw Baba, that was it,” Stella said. Baba came out of the Lagoon Cabin and stood in front of it just as Stella and Ralph came along, and for a few seconds He looked right at her. With that one glance, He stole her heart completely.

Baba proceeded down the steps and over the bridge that crosses the lagoon. Ralph watched in awe at Baba’s physical being--His presence, His aliveness, His eyes, His beauty. All ideas he had formed about masters seemed like mere foolishness, and “we stood there, dumbfounded.” When Baba’s eyes met Ralph’s, “something happened deep inside of me. I got all shook up and couldn’t think.” Not wanting others to see him sobbing, Ralph walked behind the kitchen.

When the people from Florida were called in to meet Baba in the Lagoon Cabin, Ralph saw no one but Baba in the room, although he knows the others must have been there. Baba conveyed in a natural manner such questions as, “Are you happy to see Me?” “Do you want to say something?”

Ralph said, “Baba, when I saw You near the boathouse, You took my breath away.” Baba replied, “I take away very little, and I give the infinite Ocean of Love.

Stella hardly recalls the details of the meeting; she could only look at Baba. She was confused—“Who is this man? Why do I feel this way?” She hadn’t heard much about Baba or read anything about Him yet, but she felt like a little child who had been taken to the fair.

The Hernandezes met Baba in 1958 as well but concluded their brief reminiscence here. Interestingly, when they returned home and wanted to tell the group about Baba, it had disbanded and they never saw those people again.

Ralph added that they last saw Dana Field not long before he died, when they visited him in a nursing home in California. Ralph chuckled, “And they were feeding him meat!”

Early in the morning, before seven o'clock, on July 25th, Baba's car arrived at the Guest House, where he ate his breakfast of tea and toast. At about 7:30, he came into the kitchen where his lovers were having their breakfast. The mandali remained outside. Baba then came out and sat down on one of the log benches outside the Lagoon Cabin, where he called a few such as Filis, Ruth White and Margaret, individually over to chat while the rest lingered not far away. In the early morning sunlight, a mist was rising over the lake, and Baba pointed out the lovely scenery and remarked, "Isn't this a beautiful place?"

Those staying off the Center arrived at eight o'clock. Private interviews in the Lagoon Cabin were to begin at nine, but Baba was anxious to start. All morning, Baba gave interviews, reclining on the same blue divan he had used before. Many from the southern states, Florida, Georgia and North Carolina, met him for the first time that day.

Among those from Miami, Florida, were Ralph and Stella Hernandez. Ralph, age thirty-seven, had found out about Baba from Dana Field, who had moved to Florida soon after returning from India in 1954. Earlier that morning, Ralph had seen Baba briefly, as Baba crossed the bridge. Their eyes had met, and something had happened to Ralph deep inside. He became "choked up" and could not think for about ten minutes. During his interview in the Lagoon Cabin, Baba had casual talk with various ones. Ralph was anxious to relate his recent experience, but every time he started someone else spoke up.

Finally, Baba stopped the person and looked over at Ralph. "Did you want to say something?" he questioned.

Ralph said, "Yes, Baba. When I saw you by the boathouse you took my breath away."

Baba responded, "I take away very little and I give the infinite Ocean of Love!"

Two of those who met him in 1956, Ralph and Stella Hernandez, say they had no idea what to expect but each remembers their first glimpse of Meher Baba near the Original Kitchen as clearly as if it were happening now. Ralph recalls, “At that moment when I saw him, I was taken aback by his beauty, his color and his flashing eyes,...he took my breath away.” Stella says, “I was in a daze...I felt like lightning had hit me...I don’t know how to describe it...a lot of light and this emotion going right through me.” Such are the reports of Meher Baba’s impact on those who came to see him during his visits to the Meher Center.

It was during his last visit, in 1958, that Meher Baba directed that the Center be preserved “in perpetuity”. He later approved the charter, which had been drawn up according to his instructions, making the Center a non-profit religious corporation governed by a Board of Directors.

As he prepared to leave the Center at the end of this visit, he told those present that he would not be returning. Elizabeth recalled that this prompted her to ask him, “Then who can come to the Center and stay here?” He replied through hand gestures, “All those who love and follow me and those who know of me and want to know more.” 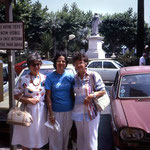 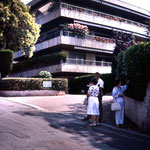 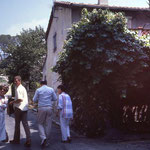 Stella Hernandez, born April 23, 1922, suffered a stroke on the evening of August 28, and was unable to recover. She dropped her body on Sunday, August 31st, without regaining consciousness. It was a peaceful passing. We were reassured by the medical staff that she suffered little pain or discomfort.
The Hernandez family is very, very grateful to the Baba community who shared many years of loving camaraderie with Ralph and Stella, and especially to those dear friends and neighbors who kept a watchful eye over them during their declining years (John & Judy Martel, Craig and Louise Smith, Corinne Merrill, Phyllis Green, Linda Mills, Denny Moore and many many others). Their lives were enriched and made whole by their love of Baba and their intimate association with the Meher Baba Center. Baba was the major focus of their lives—ALWAYS, and that was the governing force in how they lived.
Stella was only about 9 years old when she and Ralph met in Tampa, FL. Ralph was smitten with her from day one. Ralph followed the Ramirez family when they moved to New York, or more accurately, followed Stella. They were married on September 9, 1939. Bob was born in New York on November 22, 1940. Libby followed on December 18, 1943, also born in New York.
The family relocated to Tampa, FL soon after Libby’s birth. From Tampa, the family moved to Indian Rocks Beach, FL. Rick was born on September 29, 1949, in Ybor City, Tampa, while Stella was visiting her parents. Norman was the surprise baby, born in Clearwater, FL on February 9, 1962.
Stella and Ralph moved to Myrtle Beach in 1974, and the rest is Myrtle Beach History.
Stella is survived by four children, six grandchildren, nine great grandchildren, and 3 great-great grandchildren.
The family will travel to Myrtle Beach sometime in the future, when Stella will be memorialized and to say more goodbyes in the company of the Baba community, and those who loved her and cared for her and Ralph for so many, many years.
Sincere thanks and appreciation,