Born to a Druze family.

Meher Baba visited this house when he visited the city in 1956. 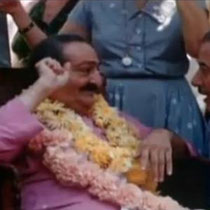 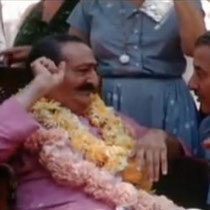 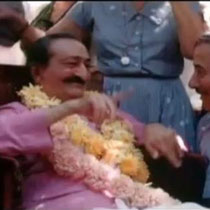 Courtesy of "God Alone Is" video

Joyously and somewhat humbly I declare that it was a supreme privilege to be called and be brought by the Perfect Master to His sphere of activity, for the purpose of receiving personal instruction and guidance on the path to God-Realization. Baba's first message to us upon our arrival in India was, "Be happy!" The anxieties of the trip were dispelled and we were happy. That message was oft-repeated and was kept in our consciousness all during the days that followed. Indeed, we were intensely conscious of the atmosphere of all-pervading Love about Baba's ashram.

Those from the Western hemisphere who participated in the Great Darshan on September 12th, 1954, were invited to be present on the platform of the pandal with Him to witness Baba lovingly install and instill the spiritual seed in the hearts of those who came to receive His "prasad," to awaken them to their spiritual mission in life by giving them the fruit or sweets which are the token of the far greater gift —His Blessed, Divine love—which each received from the Master for their spiritual awakening.

I cannot and I shall not ever forget the first time He embraced me within His loving arms. It was a most unforgettable feeling—so comforting, so peaceful, so delightful that my gratitude for this supreme privilege was of such indescribable feeling that the tears welled up and overflowed with joy and happiness. I loved Him and didn't want to take my arms away from Him, I wanted more and more of His embracing.

Baba is all Divine Love and He loves all. For those who will take His love, He has more opportunity to give them of His love. Those who do not love Him He loves and blesses, but if they will not take His love, they do not give it a chance to be received by them. He does not ask them to accept some dogma, but in the spirit of humility they obey the God in their hearts. Baba gives more as they will take, or accept, or receive more. We limit love —not He!

Baba will go to any extreme of physical exertion to find and awaken those souls with sincere or utmost yearning for God-Realization.

During the twenty days of our stay at the Ashram, every day we looked forward to Baba's coming to see us. We were like youngsters waiting for our Father to come home. Our eyes fixed on the road, anxious to see His blue car approaching, we trooped down to the gate to meet Him. We were so reluctant for Him to leave us we went to the gate with Him and watched and watched until His car disappeared from sight. I was so elated by His presence, so inspired and uplifted by His discourses, I couldn't spare a moment away from Him while it was possible to be with Him.

Divine consciousness is ever flowing through Him, but with such delightful simplicity that it would not overwhelm a child and yet it is beyond the deepest mind to fathom it. We wanted to absorb Him. The vastness of His Divine Mind and Love are so scientific, with such intricate laws, and serious and great as He is, yet He couples all this with such humor that it produces joy in the heart and a perfect picture to the mind. The heart becomes the mind's eye to observe the perfect actions of the Perfect Master, which are subtle, silent, and yet so forceful.

A living Avatar is Self-Realized from Unconscious Divinity to Conscious Divinity; functioning in all planes of existence, with all the directness and accuracy in full harmony of Divine Law and Love; manifesting a dynamic force in all His activities; having the power of Eternal Truth. He is a complete blending of God and man states. This is Baba, "The Highest of the High."

The true disciple, being in the presence of the Perfect Master and privileged to witness the perfect living exemplification of His Masterly Perfection, becomes imbued with Divine Love and Wisdom-knowledge, in spite of his human limitations, dispelling all doubts and human frailty of the mind so long as he accepts the Master in his heart. Then and at that instant, the mind becomes illuminated or enlightened with the true feeling and un­derstanding of God's presence, and of one's own true being.

However, when the Ego, through the limited mind with its mental equipment, sneaks in to claim the exclusiveness of such wisdom or spiritual understanding through mere intellect by the assertion of its self-esteem, then it plunges itself and all concerned into a state of confusion and illusion.

On the other hand, when the intellectual excellency is used by the spiritual heart and mind, the result becomes most productive in its manifest expression of wisdom-knowledge in all its functions. That becomes the evidence of Infinite, Divine Consciousness of a Great Being that recognizes spiritual freedom and the one Unity in diversity.

When the disciple is alone, away from the Master, and so-called time passes on, the reflection of such abstract thoughts begin to take shape the process of integration as he lives them actually in his pursuit of action in awakened consciousness. Then it could be said that "There is nothing higher than Truth but true living!" This procedure eventually will lead the disciple to ultimate Reality.

IT IS 'I' WHO HAVE CANCER
Bhau Kalchuri
Joseph and Kari Harb were staying at the Napier Hotel in Poona. But Joseph had been very ill for several weeks with gall bladder trouble which had recently taken a serious turn. The day Baba arrived at Guruprasad [March 24, 1963], they came to see him. Baba advised Joseph to proceed with the surgery. Baba emphasized to him repeatedly, "I am the only Reality. All else that seems real is illusion. I am God, 100% so! There is nothing besides me. Therefore, think only of me and constantly repeat my name. If you were to drop your body this instant, this alone will be of use to you."
* * * *
Joseph Harb had recently undergone gall bladder surgery, and Baba went to see him three times at the Jehangir Nursing Home. Herman Alvarado arrived and also saw Joseph. Harry Dedolchow and A. K. Das visited Guruprasad for three days at this time [April, 1963]. Dedolchow asked Baba if he could go to the hospital and visit his friend Joseph. Baba agreed, but instructed him, "When you go, tell Joseph the reason I did not let him drop his body was because he did not say my name when he was about to take his last breath."
Harry Dedolchow found this confusing and said, "Baba, I used to live with the Harbs in San Francisco for many months, and Joseph always repeats your name for one hour every morning."
But Baba replied, "Just don't forget to tell Joseph what I said," and he sent Harry Dedolchow away with brother Jal. At the hospital, they asked the nurse on duty for Joseph's room number. She gave it, saying, "Don't stay too long, and please don't give him any bad news. He is in a very critical condition." Nervous, Dedolchow thought again of the message he carried from Baba.
When Dedolchow entered Joseph Harb's room, he saw that his face was chalk-white. Joseph spoke slowly and looked like he would not live much longer. They chatted for a while, Dedolchow conveying Ivy Duce's and all the San Francisco Sufis' best wishes to Joseph. Finally, Joseph said, "I am tired; is there anything else you want to tell me? Convey my love to Baba and tell him that I am feeling better."
Dedolchow looked at Jal and, remembering the nurse's warning, did not have the heart to tell Joseph what Baba had told him. He said, "No, Joseph, there isn't anything else to say."
It was almost one o'clock in the afternoon, and they were expected back at Guruprasad by then, so they took a taxi from the hospital. Harry Dedolchow fervently hoped Baba would not ask him if he had delivered the message. When they entered the hall, the session had already begun, and Dedolchow tried to hide in the rear behind those who had already come. Baba quickly stopped him and called him to his side. He asked, "Harry, did you tell Joseph what I told you to tell him?"
Harry Dedolchow silently cursed to himself: "Damn it, Baba, don't you ever forget!" Everyone in the room was looking at him, waiting for his reply. He lowered his head and said, "Baba, Joseph looked like he does not have much more time to live. He looked so ill. I just did not have the heart to tell him."
Baba made no reply. Years before, after reading about Baba's life and how difficult the mandali would find it at times to carry out simple orders from Baba, Harry Dedolchow had vowed that if he ever got the chance, he would teach the Easterners a thing or two in this regard. Well, Baba had given him his chance, and his failure was a crushing blow to his ego. He was afraid that if he delivered Baba's message, Joseph might get a shock and pass away — and he would be blamed for disregarding what the nurse had said. Dedolchow discovered that implicit obedience to the Master is not as easy as it sounds.
At the time, Kari Harb was convinced that Joseph was about to die, but Baba assured her he would recover, which he did. At one point, the doctors suspected malignancy, but Baba assured Joseph, "I tell you, you do not have cancer. As a matter of fact, it is 'I' who have cancer. All of you around me and the whole world are my cancerous growth, and so I suffer continually."
LORD MEHER, 1st USA ed, vol. 17 & 18, pp. 6097, 6111-6112

The following sequence of images is from the video ; "Meher Baba, The Awakener" 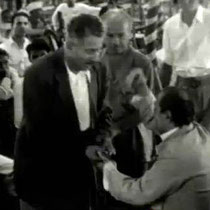 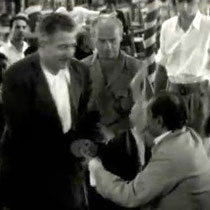 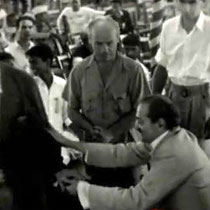 Couresy of "God Alone Is" video. 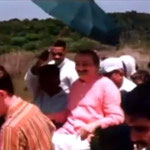 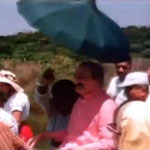 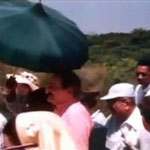 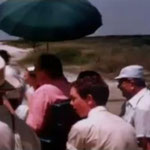