Mary and Will Backett were English mureeds of Inayat Khan. In 1932 they met Meher Baba. They stayed with him in India and France, and worked for him, mostly in England, for thirty years.

Letter from MS Irani to Will Backett

MARY BACKETT died in 1962. Baba cabled her husband Will, 'My Archangel Mary has come to me after fulfilling her appointed task. Be happy in my love.' WILL BACKETT died about eight months later. Baba cabled Mollie Eve, 'Both my dear Archangels Will and Mary Backett have come to me for all time.' 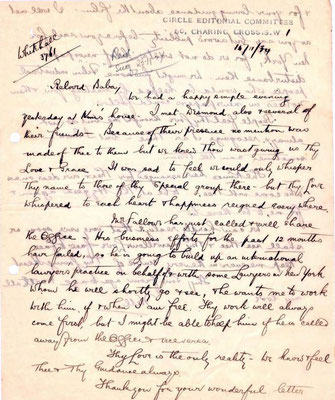 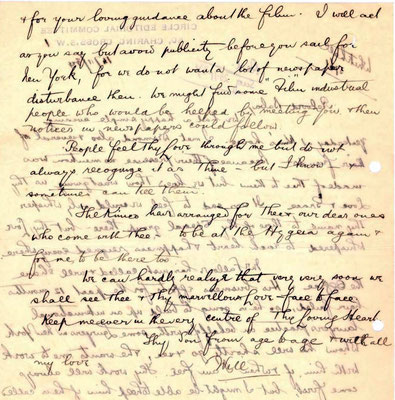 Baba's guests from the West stayed at Meher Retreat on the Hill at Meherabad, the place where for 30 years He had made spiritual history, which we relived with Him as He showed us about and recalled periods of seclusion in different places.

The main building inside the compound was originally a disused stone water tank, 40'x20'x15', in which a door and windows were introduced later, becoming afterwards a center for training Baba's women devotees, Eastern and Western, in strict seclusion.

In the very early period, Baba used to descend alone into the dark depths of the tank for seclusion, which He also did in a cavity outside the com­pound, which was later roofed over with a dome and will be the tomb for His body when He lays it down. At each of the four corners of the domed roof is a symbol of a great world religion—a cross for Christianity, a crescent for Mohammedanism, a flame for Zoroastrianism, and a temple-dome for Hinduism. Baba has come to put new life into each religion. Under the wonderful Indian sky this beautiful snow-white building, bearing the inscription over the door, "Mastery in Servitude," might seem to have de­scended from Heaven itself to witness the triumph of Divine Love on earth.

Nearby are the tombs of those close to Baba in the East and West, and one reads "In Eternal Memory of Meher Baba's Blessed Parents, who are now merged in Baba's Infinity."

Baba lovingly pointed also to other smaller stones bearing the names of five faithful dogs who had served Him; one, named "Chum," used to keep guard near His door and would not allow even the Mandali to come near.

He also showed us the shed outside the compound which was used as the original "Mast" ashram, and the separate room adjoining it, with an interior partition behind which He remained in strict seclusion, out of sight of the Mandali, except for a small opening for His alphabet board on which He conveyed messages. Such was the burden of spiritual travail and con­sequent physical suffering that His finger often paused from sheer weakness.

On another occasion when showing these buildings afresh, there was a dead sparrow lying on the floor of the tomb, which Baba gently took in His hand, spelling out "lucky sparrow" ... for surely the birds and all  creation also benefit from the Master's Presence.

In 1938 an upper floor was added to the tank building, with an outside staircase and tower, which commanded a view of the surrounding country. To the north, between two ranges of hills thirteen miles away, the hill of Pimpalgaon is visible. Baba's ashram is at the foot of Meherabad Hill, where we were also taken by Him, and He conducted us first through the men's quarters. There we met several of His old Mandali members, while Baba explained their lives of seclusion, fasting, meditation or strenuous activity. Here, too, is the tiny room where His "Mast" work was done-alone—and the meager floor covering on which He slept. Outside, someone always kept watch at night to answer immediately any summons from within.

Here, too, was the dismantled blue bus—veteran of many thousands of miles of touring throughout India with Baba and His party. In this same bus Baba spent part of the "Great Seclusion" of 1949. Nearby is a shed reconstructed from the two smaller ones erected on Pimpalgaon Hill, one on the summit and one on a ledge of the Hill further down. Baba was in seclusion in both of these huts and said that in future years that hill (at Pimpalgaon) would be venerated and become a great place of pilgrimage.

On another day, we followed Baba, a truly inspiring figure in white, up this same Hill in brilliant Indian sunshine, He an embodiment of spiritual grace and energy. He sat down three times in deep thought, and often had to stop to allow us to keep near Him;—we two eldest were directed to rest while He took the others to the summit. How fortunate we were, He said, to be there with Him leading the way. Afterwards we visited the women's quarters at Pimpalgaon, and while we were seated around Him on the veran­dah, He showed us His two greatest spiritual treasures—a very old patched coat which He wore thirty years ago in the "Prem (Love) Ashram" days, and the pair of old, old sandals worn in 1928. This was the year Babajan came to the railroad crossing at Meherabad and the two Masters met, for the last time.

In years to come, Baba said, people will revere that coat and sandals, and find out "what they contain."

While resting there with Him we were all served a refreshing fruit drink, another instance of Baba's thought of our needs.

While at Meherabad, He would sometimes give as fruit, one by one, or Himself serve each plate, as His "prasad"; and once the Indian waiters and Indian staff shared with us like one family. On another occasion, He walked round the table to place both hands on our shoulders, and the gentle firmness of His touch gave deep significance to that simple gesture. There was much laughter when He circumnavigated the long table to find where He could best tickle each one, joining in the fun Himself, for He likes us to be bright and happy always. At the ping gong table provided for our relaxation, He was a doughty opponent, with unique grace and speed. He also showed us a different game of marbles, awarding a prize to the winner and applauding his skill or luck, as part of the deeper game of Divine Love, which is the Master's real sport.

It was, however, a solemn moment, when towards the end of our stay, Baba sent for glasses of fruit drink, and after dismissing His Eastern followers, put His own lips to each glass, after which each of us partook from one glass.

Truly, as one of Baba's absent Western devotees had written, "we are millionaires in Love, through Baba's grace."

As if to emphasize His universal consciousness and Presence at all times, He said, on other occasions:

"I know everything—I cannot help it."

“It is not easy for you to understand that, though I am here with you in this place, I am also everywhere at the same time."

Taking us to the place outside the compound adjoining His tomb, where He used to give spiritual instruction to the boys at His school, Baba showed us where one of them became conscious of The Master's Universal Divine Form, which the boy also saw in everyone and everything and enjoyed ineffable spiritual bliss."*

Perhaps it was to prepare others that He said, another morning, "I want you,

Meanwhile, some of the Westerners had already arrived in Bombay. On September 11th,1954, Meherjee and Nariman brought them to Ahmednagar at 10:30 P.M. The group consisted of the following individuals, ranging in age from twenty-three to eighty:

Will Backett  and his wife Mary were the real backbone of the British contingent of Meher Baba devotees. Formerly affiliates of the Inayat Khan Sufi movement, they transferred allegiance to Meher Baba after meeting him in London. He visited their home in 1933. They lived a very simple and committed life at their rural cottage in Kent; Mary wore distinctive garb and used a spinning wheel to make her own clothes. Their home became the unofficial centre for many British followers over three decades. They moved to Acton, London, in 1951; in their new home, they were also hosts to diverse Asian devotees, who rated them highly. Their modest five room Acton bungalow was the only British "center of information about Meher Baba" listed in The Awakener(an American journal on Meher Baba) during the 1950s. The Davy article described this domestic venue as "the meeting house for East and West" until 1962.