The following sequence of images is from the video "Meher Baba, The Awakener"

India - 1954 : Bill follows Francis and he in turn is followed by fellow Australian, John Ballantyne. 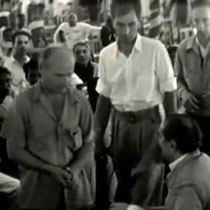 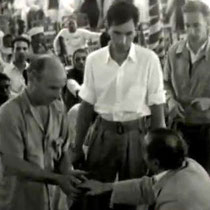 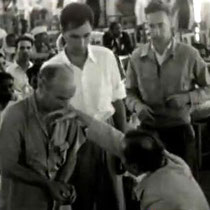 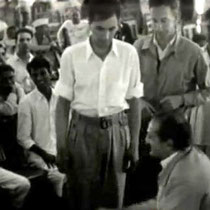 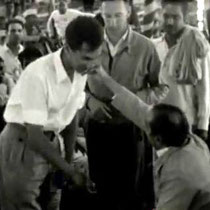 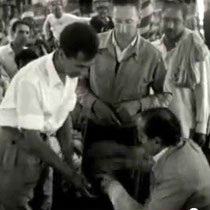 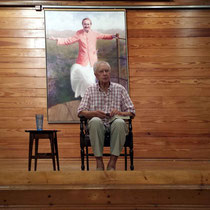 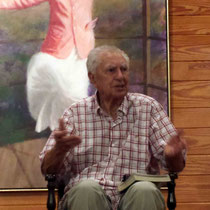 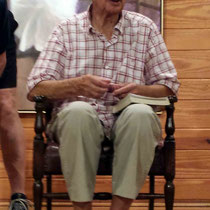 From Wikipedia, the free encyclopedia
https://en.wikipedia.org/wiki/Bill_Le_Page

Bill Le Page ( Born 14 August 1924 ) is an Australian businessman, a psychologist and a long time follower of Meher Baba.

Bill Le Page was born in Melbourne Australia in 1924 and is the current chairman of the Avatar's Abode Pty Ltd . In 1954, Meher Baba gave a series of meetings called Three Incredible Weeks.

At this gathering Western followers were invited to meet his Indian disciples, and Meher Baba gave darshan many thousands of people and had his Final Declaration read out.[5][6] Bill Le Page was one of select few Westerners who were invited to this event and he was one of only two men ordered to meditate at midnight in Meher Baba's samadhi (tomb-shrine) in Meherabad, India which has become a place of international pilgrimage.

He returned to India in 1962 for The East-West Gathering where the Universal Message was read by Meher Baba.  In 1967 on his third visit to India received personal directives from Meher Baba regarding Avatar's Abode's development. His last visit for Meher Baba's darshan was for the famous 1969 Darshan.

After many years of spiritual searching Bill, age thirty, he found out about Meher Baba from the Australian Sufi leader Baron Von Frankenburg in 1947, and met Francis Brabazon a year later.[20] Meher Baba visited Australia and stayed at Avatar's Abode in 1958 . As Francis Brabazon began spending increasing time in India with Meher Baba he was released from the work associated with Australia. Meher Baba called Bill Le Page Francis Brabazon's 'right hand' in Australia.