On Friday, 20 May 1932, Baba went sightseeing by car around the city with the mandali and saw the Empire State Building. He met many people that day, including, Joseph John Bass, 40, who had been introduced to Baba through Norina. John Bass was to become a lifelong disciple of the Master. Elizabeth Patterson's parents, Simeon B. Chapin and his wife Elizabeth, also met Baba that day. Elizabeth's mother had loaned the group $5,000 interest-free to help fund Baba's trip, and her father was one day to donate several hundred acres of land in South Carolina to be used as a center for the Master's work.

Reaching Istanbul, Baba and the mandali boarded the Orient Express on the 31st at 9:45 P.M. for Paris, where they arrived on Tuesday, 3 November 1936. After a brief rest, they left Paris and arrived in London the following day, whereupon Baba and the mandali resided once again at Hygeia House.

In London, Baba granted separate interviews to Kitty, her older sister May Cluse, Minta Toledano, Margaret Craske, Mabel Ryan, Delia DeLeon, Christine McNaughton, Will and Mary Backett, Tom Sharpley, Quentin Tod and Charles Purdom. In a similar manner, he met in private with his American lovers who had come to London:  Norina, Elizabeth, Nonny and Rano, Sam Cohen, and Malcolm and Jean Schloss. Three others — John Bass, Kenneth Ross and Edith Duro — also met with him, but Baba decided not to allow them to come to India, directing them instead to return to America. To the rest of his Western lovers Baba explained in detail about their forthcoming stay in Meher Retreat in Nasik. He fixed the date of their traveling to India as a month from then, in December.

.......Regarding building, the government permits one to spend $1,000 each year for farm buildings and we have built a two-room cabin with screened-in porch (which we call your cabin) and another one-room cabin with screened-in porch for a kitchen and dining room, this year. Those who came down with Norina and myself, namely Darwin Shaw, Frank and Kay Eaton and John Bass, sent down portable houses where they stayed near by. Anna Till came with us this last trip and cooked for all of us. She is a spiritually devoted soul and contributed her work. She longs to meet you.

Darwin Shaw narrates the same story in his book As Only God Can Love, p.141:

“On one occasion when Fred Winterfeldt, John Bass, and I were talking with Baba, he told us about a world catastrophe that would take the lives of many people. Fred told Baba that he had a friend who had heard about this predicted world catastrophe and was seriously considering moving to some remote mountain area where it might be safer. Using his alphabet board, with one of the Eastern men interpreting, Baba replied, ‘If the world catastrophe occurs after November 15—when my Fiery Free Life begins—it will be so devastating that even the tops of the Himalayas will be affected. Do not run away. It will do no good. Only those who are protected by God will survive.’

“Then one of us asked Baba, ‘Are there any masts in America?’ Baba began gazing around, as though scanning America. He replied, ‘One or two, but don’t look for them. You have me.’” 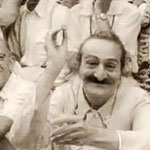 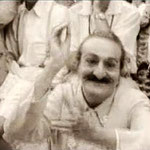