Darwin first met Meher Baba in 1934. He had read about Baba in newspapers in 1932. He was convinced that Baba was the One, he commenced meetings at his home in Schenectady that same year. He and Jeanne moved permanently to Myrtle Beach in 1989, although he was sent there often in the 1940s the work at the new Center. 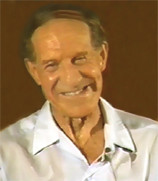 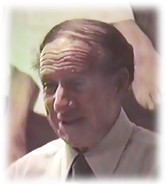 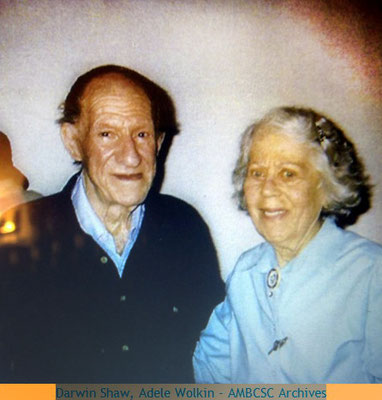 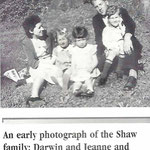 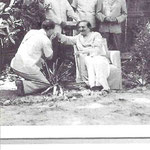 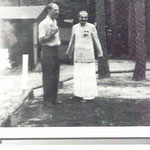 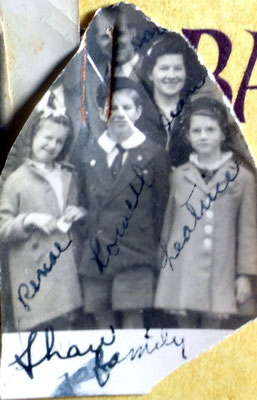 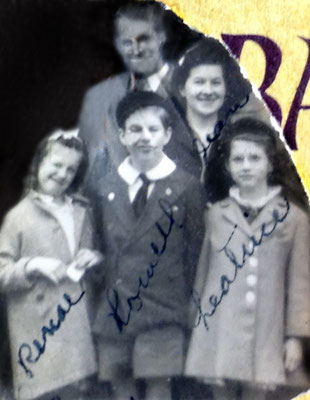 Meanwhile, some of the Westerners had already arrived in Bombay. On September 11th,1954,  Meherjee and Nariman brought them to Ahmednagar at 10:30 P.M. The group consisted of the following individuals, ranging in age from twenty-three to eighty:

LTHOUGH BABA is just completing his 59th year, there is so much about him that is timeless, that it is difficult for us to think of him in terms of age. The Great Being behind that face and form we know and love so dearly is, as we are sure, not measurable by the passage of time, but is as immortal as the Divine Love with which we identify him. Incelebrating Baba's Birthday, therefore, we are really celebrating the return to earth of Love Divine in the form of a man we can see, love and with whom we can communicate. A Being who has, ages since, completed the long evolutionary process of the Soul through numerous cycles of lives, from the original state of unconscious Divinity, to the final state of fully-realized God-hood. This is Baba, our Spiritual Master, Eternal Friend and Divine Beloved.

We have found in him the living Beauty of all our highest hopes, and we have experienced, through his Grace, a precious taste of the Divine Nectar which is, indeed, the true panacea for all the suffering, disillusionment and mayavic ignorance which, in one way or another, besets all humanity. And this Divine Nectar is the touch of the Master's boundless Compassion which has, somehow, in mysterious ways known only to him, found us in our far corners of the earth and awakened some measure of our slumbering consciousness from the darkened dreams of life, as seen through the distorted vision of our own selfhood.

Through Baba we have been touched by a Love too great for us to com­prehend, much less ever to have deserved. We have come to him in various ways; sometimes groping, often wondering, but always with faith and longing; and he has taken us into his Infinite Heart where we have found the secret Highway to God.

We have discovered that Baba works through the very fabric of our prosaic, everyday lives to reveal an ever greater measure of the Spiritual Splendour of his True Being, and, through inwardly drawing closer to the Unveiled Reality we discern in him, we find that the Way has become clearer, easier and more sure; that the once remote possibility of actually experiencing God has now become a vibrant promise which, even in this lifetime, may be fulfilled.

As the Messianic Avatar of the Ages, Baba again comes forth to succor the great need of the immortal spirit of man. As such, he leads the way  out of the labyrinthine maze of selfhood's false impressions, and declares with Divine authority the true nature of man and the Real Goal of Life.

"It is time," Baba says, "that man had a fresh vision of the Truth that all life is one, and that GOD IS THE ONLY THING WHICH IS REAL AND THE ONLY THING THAT MATTERS. God," he continues, "is worth living for; and He is also worth dying for; all else is an empty pursuit of illusory values."

"We have to love Him silently and honestly even in our everyday life. Whilst eating, drinking, talking and doing all our duties, we can still love God continuously, without letting anyone know. When God is found, you can have no idea what Infinite Bliss and Peace is gained. I give you all my love so that some day you can love God as He ought to be loved."

Strange as it may seem to those who do not know, we have found that through loving Baba we are actually loving God; and that his Love leads us into the inner mystery of the Ocean of Divine Love that God really is. This is the Key to one of the most beautiful and overwhelming of all mystical experiences; for when we love, and inwardly keep company with the God-realized Master, we in turn become the recipients of his immeasurably greater Love; and this outpouring is more than the hard-shelled ego can bear, so it begins to die. But that dying is actually the beginning of Life, for it is the beginning of the annihilation of the false by being in the conscious Presence of the Real.

“If you who keep company with me," Baba once said, are sometimes attracted to worldly maya, do not get disappointed. I, too, was once like you, but the grace of Babajan descended upon me, and She, the Perfect Saint, presented me with the Pearl of God-Realization."

And the following lines have been quoted by Baba, as they explain so well the beautiful relationship between the sincere devotee and the Master:

"Constantly repeating Thy Name, I become one with Thee, nothing was left of me (self). How can I sing Thy praise, 0 Guru Mine? Wherever I cast my eyes, I perceive Thee and nothing else."

With this as the pattern of our devotion, may our Birthday Remem­brance to Baba be a greater effort to understand and more deeply appre­ciate the incomparable importance of his life as it touches ours; and let us, in all sincerity, have the courage, the humility and the faith to let go of every shade of self-centered ignorance, and truly, wholeheartedly set forth on the glorious Path of Love and Truth to the Highest of the High.

For each of us who had never before witnessed Baba at work with such a multitude, the day of His Last Mass Darshan was an amazing experience. The interest the Indian people show in a Spiritual Master is, in itself, an example which the people of the West would do well to consider and emulate. Although many of those who attended the Mass Darshan were from Ahmednagar, where the program was held, there were thousands of others who had to travel several miles, either afoot or in bullock carts. Others of Baba's devotees had come from as far as Bombay and Andhra; while we Westerners had, of course, come many thousands of miles.

The Indian people, dressed as they were, in many-hued saris and turbans, made a very colorful assemblage. They were from every class and creed. Among them were the aged, the lame and the blind. Many women carried babes in arms. In this huge crowd one felt that the differences, which ordinarily separate one group of people from another, were completely forgotten. We watched as Mohammedans, Hindus, Parsees and Christians commingled with those of so-called higher caste and lower caste, the well-to-do and the very poor, to become one homogeneous stream of humanity, united and humble in their appreciation of the great and rare privilege it was for them all to have a personal contact with the God-man. Baba, himself, declared the importance of this personal contact when He said, No explanations or discourses can compare with the personal contact. I feel I am in all. It is Baba bowing down to Baba."

Baba made this statement at the so-called "Little Darshan" on September 26th, which was given for those, who, because of the huge crowd on the 12th of September, were unable to contact Him on that day. At this "Little Darshan" about 8,000 people filed past Him—touching His hands or His feet, or placing sweet-smelling garlands of jasmine around His neck. Baba said, "Whatever anyone takes Me for, I am that"

On both days we were near Baba most of the time, and we watched with heartfelt wonder as this profoundly impressive drama between the Divine Beloved and the humanity for whom He has taken incarnation, took place before us. We deeply felt the soul-stirring significance of these long hours of Divine Love in action and, in our hearts, we knew that new Light was being shed along the pathway that humanity must tread on its pilgrimage toward the Infinite. 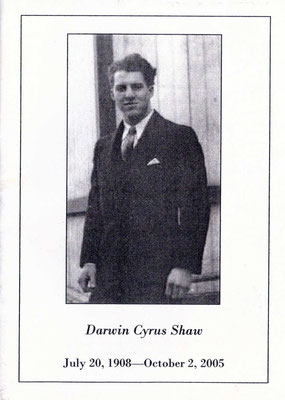 AS ONLY GOD CAN LOVE

A LIFETIME COMPAIONSHIP WITH MEHER BABA