Siblings : Emil - who was an artist ( painter )

Ernest - who was a WW2 Pacific pilot

He used to hang out at ' Jockey Corner ' which was a 'Kappa Sigma' fraternity area.

Kecha was a modern dance choreographer at the time.

Henry played trombone in an orchestra after playing in the Navy. He also did some conducting.

Henry was was a guest on the Alan Burke TV Show in New York City in the 1980s, in which he spoke of Meher Baba.

Henry donated many books many of which were at A.R.E. - Edgar Cayce's Association for Research & Enlightenment at Virginia Beach, Virginia.

It was at their library that Lawrence Reiter "Hermes"  first read about Meher Baba.

In the early 1970s, Henry took Adi K.Irani, Meherjee and John Bass to A.R.E. and they gave a talk about Baba to the audiance. Hugh Lynn, the son of Edgar Cayce was in the audience and was very happy to hear them. He revealed that he had gone to India to see Baba, but he was in seclusion.

Henry had another meeting with Hugh Lynn in his office which was in a church.

﻿Elizabeth Sacalis who was friend of Kecha ( Henry's wife ) and who was working at the time at the Robert Blackman Institute in New York City, sent a copy of "God Speaks" to Henry's office. This was the first time that he had heard of Meher Baba.

Henry David Kashouty, age thirty-three, was a lawyer from Virginia who had been looking all his life "for the kind of answer that would be able to hold up no matter what happened in life." He had read widely, but in 1955, as he wrote to Swami Nikhilananda (a disciple of Ramakrishna of Calcutta) in New York, "I am growing tired of reading of the Reality I am now convinced exists. I want to meet someone who has experienced that Reality."

His wife Kecha's childhood friend, Elizabeth Sacalis, came from New York to visit, and Henry told her of his inner longings. When she returned in December 1955, she sent him God Speaks as a Christmas present. Henry unwrapped the package in his office and saw Baba's picture. "He looked so ancient, so timeless," Henry remembered. "There was something about that picture. It was instant recognition. He was someone who had that authority, who knew everything there was to know. Someone in whom I could place my confidence. My conviction was one hundred percent."

Kashouty had only read the inside flyleaf of the cover when he picked up the telephone, called Elizabeth Sacalis in New York and told her, "Meher Baba is the One. Please find out how we can meet him." Later, Elizabeth contacted Henry to say that she had been to the office of Dodd, Mead, and was told Baba had come in 1952, and was not expected again. There was an address in India on the back cover of the book (King's Road, Ahmednagar), so Henry sent a special delivery airmail letter to Baba in which he stated: "Dear Meher Baba, I have your book God Speaks. It has great meaning for me. I want to meet you and I do not think that is impossible." He received a reply that Baba would be in New York the following spring. Kashouty said: "That was the beginning – the beginning of this love affair."

When Baba arrived in America, Henry and his wife Kecha, age twenty-four, drove north to New York from Virginia. On July 20th, they drove to the Hotel Delmonico to meet Baba. Kecha had some errands to do, so Henry got out and went inside. They got to the floor where Baba was meeting people and gave their names to John Bass. Here is Henry's account of his first meeting with the Knower of All:

When I finally had the opportunity to go into the room where Baba was, I looked at him and my reaction, my feeling was of total knowing of this person. There was no barrier of any kind. There is always a barrier between a person and a friend, or a relative, or a mother or father – things you would not say, whatever. But here, there was absolutely no barrier between me and that person – which meant that those things that I would not tell a soul, I would not have hesitated to say to him. That is what I mean when I say I felt as if I had always known him – such an intimate closeness.

For years, I looked for someone to whom I could say anything. But the only thing I could say to Baba when he embraced me was what I said in his ear: "I adore you."

When Henry Kashouty was let out into the corridor where everyone went after having their interview with Baba, he was totally dissatisfied. He did not feel that he had said what he needed to say to Baba, although he did not really know what to say. He further stated:

Baba was God, and I wanted to look at God in human form – how he blinks, how he turns his head – everything! If I could not see the Godliness there, my blindness, if it looked enough, would see. There was not any question in my mind that his Reality would touch the deepest aspect in me if I looked long enough.

Every time the door opened, Kashouty tried to peek inside for another glimpse of Baba. Finally, Eruch approached him and said, "Baba wants to know what you want."

Henry said, "I must see him again," and he was allowed to see Baba once more. He later explained: "I found it very troubling that I could not strip away everything false about me, to find my own reality enough to address this great Reality." The best he could do was to say: "Baba, I must experience the Truth."

Baba beamed and said, "You will experience the Truth. I am helping you. I will help you."

The Avatar Meher Baba Perpetual Public Charitable Trust, Ahmednagar, India are the copyright holders of all of Meher Baba's messages, discourses and photographs, unless otherwise stated. 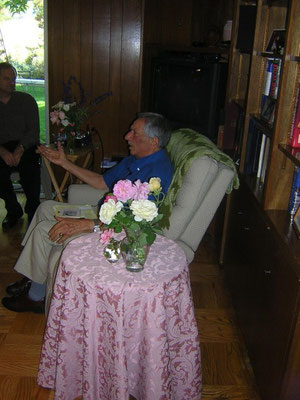 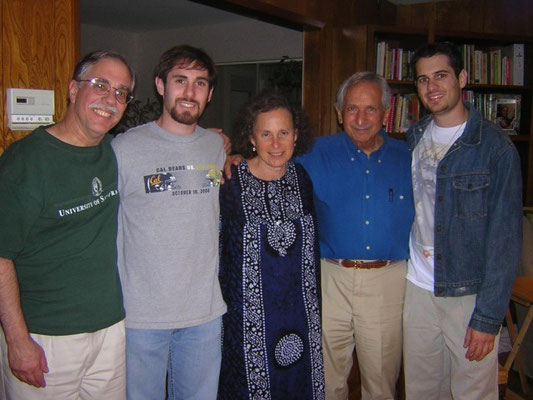 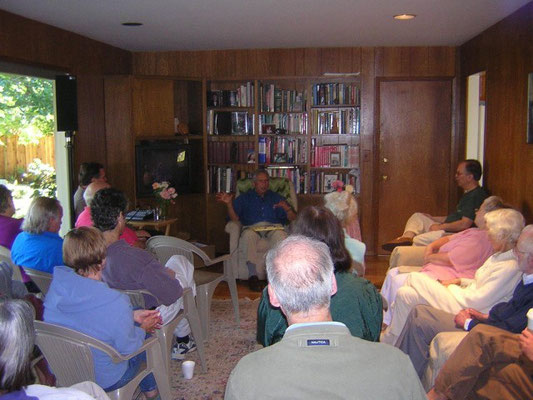 1958 ; Henry & Kecha at the Meher Center in Myrtle Beach, SC., during Meher Baba's visit. Image captured from a film by Anthony Zois. 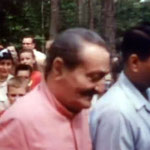 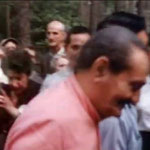 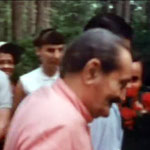 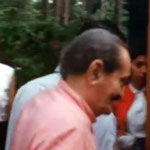 Henry playing his trombone during Baba's birthday celebrations at Meherabode

" Meher Baba Calling "from Philip Ludwig: "In December of 2009, Henry Kashouty visited our house for a Baba meeting. I persuaded him to read the booklet “Meher Baba Calling” from cover-to-cover, with the plan to release a CD. Because of the length, I was only able to complete the first half of the booklet, which I called Part 1. The attached mp3 is a 4-selection excerpt from that unfinished CD in tribute to a wonderful man and a great soul who helped us understand the significance of our having been given the conviction of Baba’s Godhood."