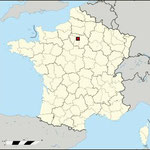 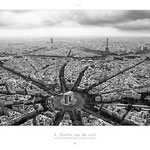 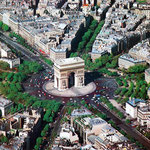 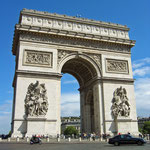 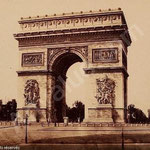 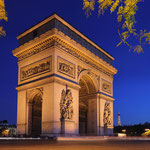 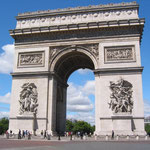 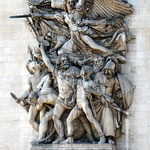 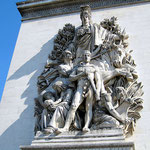 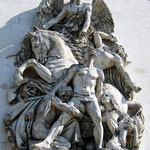 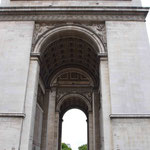 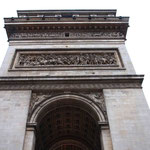 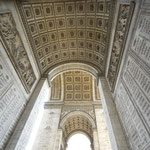 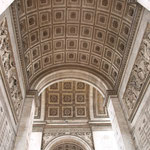 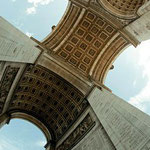 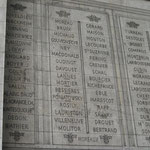 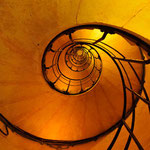 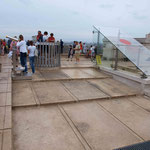 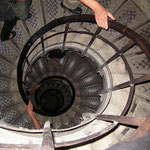 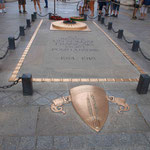 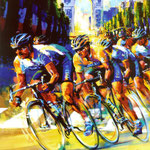 From Wikipedia, the free encyclopedia
This article is about the monument in Paris. For the horse race in Paris, see Prix de l'Arc de Triomphe. For other uses, see Arch of Triumph (disambiguation).

The Arc de Triomphe (Arc de Triomphe de l'Étoile) is one of the most famous monuments in Paris. It stands in the centre of the Place Charles de Gaulle (originally named Place de l'Étoile), at the western end of the Champs-Élysées.[1] There is a smaller arch, the Arc de Triomphe du Carrousel, which stands west of the Louvre. The Arc de Triomphe (in English: "Triumphal Arch") honours those who fought and died for France in the French Revolutionary and the Napoleonic Wars, with the names of all French victories and generals inscribed on its inner and outer surfaces. Beneath its vault lies the Tomb of the Unknown Soldier from World War I.

The Arc de Triomphe is the linchpin of the historic axis (Axe historique) — a sequence of monuments and grand thoroughfares on a route which goes from the courtyard of the Louvre, to the Grande Arche de la Défense. The monument was designed by Jean Chalgrin in 1806, and its iconographic program pitted heroically nude French youths against bearded Germanic warriors in chain mail. It set the tone for public monuments, with triumphant patriotic messages.

The Arc is located on the right bank of the Seine at the centre of a pentagon-shaped configuration of twelve radiating avenues. It was commissioned in 1806 after the victory at Austerlitz by Emperor Napoleon at the peak of his fortunes. Laying the foundations alone took two years and, in 1810, when Napoleon entered Paris from the west with his bride Archduchess Marie-Louise of Austria, he had a wooden mock-up of the completed arch constructed. The architect, Jean Chalgrin, died in 1811 and the work was taken over by Jean-Nicolas Huyot. During the Bourbon Restoration, construction was halted and it would not be completed until the reign of King Louis-Philippe, between 1833 and 1836, by the architects Goust, then Huyot, under the direction of Héricart de Thury. On 15 December 1840, brought back to France from Saint Helena, Napoleon's remains passed under it on their way to the Emperor's final resting place at the Invalides.[6] Prior to burial in the Panthéon, the body of Victor Hugo was exposed under the Arc during the night of 22 May 1885.

The sword carried by the Republic in the Marseillaise relief broke off on the day, it is said, that the Battle of Verdun began in 1916. The relief was immediately hidden by tarpaulins to conceal the accident and avoid any undesired ominous interpretations[citation needed]. On 7 August 1919, Charles Godefroy successfully flew his biplane under the Arc.[7] Jean Navarre was the pilot who was tasked to make the flight, but he died on 10 July 1919 when he crashed near Villacoublay while training for the flight.

Following its construction, the Arc de Triomphe became the rallying point of French troops parading after successful military campaigns and for the annual Bastille Day Military Parade. Famous victory marches around or under the Arc have included the Germans in 1871, the French in 1919, the Germans in 1940,[8] and the French and Allies in 1944[9] and 1945. A United States postage stamp of 1945 shows the Arc de Triomphe in the background as victorious American troops march down the Champs-Élysées and U.S. airplanes fly overhead on 29 August 1944. After the interment of the Unknown Soldier, however, all military parades (including the aforementioned post-1919) have avoided marching through the actual arch. The route taken is up to the arch and then around its side, out of respect for the tomb and its symbolism. Both Hitler in 1940 and de Gaulle in 1944 observed this custom.

By the early 1960s, the monument had grown very blackened from coal soot and automobile exhaust, and during 1965–1966 it was cleaned through bleaching.

The astylar design is by Jean Chalgrin (1739–1811), in the Neoclassical version of ancient Roman architecture (see, for example, the triumphal Arch of Titus). Major academic sculptors of France are represented in the sculpture of the Arc de Triomphe: Jean-Pierre Cortot; François Rude; Antoine Étex; James Pradier and Philippe Joseph Henri Lemaire. The main sculptures are not integral friezes but are treated as independent trophies applied to the vast ashlar masonry masses, not unlike the gilt-bronze appliqués on Empire furniture. The four sculptural groups at the base of the Arc are The Triumph of 1810 (Cortot), Resistance and Peace (both by Antoine Étex) and the most renowned of them all, Departure of the Volunteers of 1792 commonly called La Marseillaise (François Rude). The face of the allegorical representation of France calling forth her people on this last was used as the belt buckle for the honorary rank of Marshal of France. Since the fall of Napoleon (1815), the sculpture representing Peace is interpreted as commemorating the Peace of 1815.

In the attic above the richly sculptured frieze of soldiers are 30 shields engraved with the names of major Revolutionary and Napoleonic military victories.[10] The inside walls of the monument list the names of 660 persons, among which are 558 French generals of the First French Empire;[11] the names of those who died in battle are underlined. Also inscribed, on the shorter sides of the four supporting columns, are the names of the major victorious battles of the Napoleonic Wars. The battles that took place in the period between the departure of Napoleon from Elba to his final defeat at Waterloo are not included.

There was at the top of the Arc from 1882 to 1886, a monumental sculpture of Alexandre Falguière, "Le triomphe de la Révolution" (the Triumph of the Revolution), a chariot drawn by horses preparing "to crush Anarchy and Despotism", that remained only four years up there before falling in ruins.

Inside the monument, a new permanent exhibition conceived by the artist Maurice Benayoun and the architect Christophe Girault opened in February 2007.[12] The steel and new media installation interrogates the symbolism of the national monument, questioning the balance of its symbolic message during the last two centuries, oscillating between war and peace.

Tomb of the Unknown Soldier beneath the Arc de Triomphe, Paris

Beneath the Arc is the Tomb of the Unknown Soldier from the First World War. Interred here on Armistice Day 1920, it has the first eternal flame lit in Western and Eastern Europe since the Vestal Virgins' fire was extinguished in the fourth century. It burns in memory of the dead who were never identified (now in both World Wars). A ceremony is held there every 11 November on the anniversary of the armistice signed between France and Germany in 1918. It was originally decided on 12 November 1919 to bury the unknown soldier's remains in the Panthéon, but a public letter-writing campaign led to the decision to bury him beneath the Arc de Triomphe. The coffin was put in the chapel on the first floor of the Arc on 10 November 1920, and put in its final resting place on 28 January 1921. The slab on top carries the inscription ICI REPOSE UN SOLDAT FRANÇAIS MORT POUR LA PATRIE 1914–1918 ("Here lies a French soldier who died for the fatherland 1914–1918").

In 1961, President John F. Kennedy and First Lady Jacqueline Kennedy of the United States paid their respects at the Tomb of the Unknown Soldier, accompanied by French President Charles de Gaulle. After the 1963 assassination of President Kennedy, Mrs Kennedy remembered the eternal flame at the Arc de Triomphe and requested that an eternal flame be placed next to her husband's grave at Arlington National Cemetery in Virginia. President Charles de Gaulle went to Washington to attend the state funeral, and witnessed Jacqueline Kennedy lighting the eternal flame that had been inspired by her visit to France. 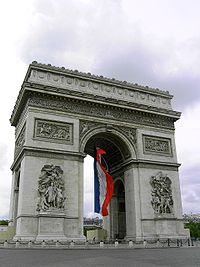 The Arc de Triomphe from the Place Charles de Gaulle

The Arc de Triomphe is located on Paris's Axe historique, a large perspective that runs from the Louvre to the Arche de la Défense.

The Arc de Triomphe is accessible by the RER and Métro, with exit at the Charles de Gaulle—Étoile station.

Because of heavy traffic on the roundabout of which the Arc is the centre, it is recommended that pedestrians use one of two underpasses located at the Champs Élysées and the Avenue de la Grande Armée.

A lift will take visitors almost to the top - to the attic, where there is a small museum which contains large models of the Arc and tells its story from the time of its construction. 46 steps remain to climb in order to reach the top, the terrasse, from where one can enjoy a panoramic view of Paris.