Meher Baba and his men mandali left Southampton, England on the 5th December 1934 for New York.

Rano and Nonny Gayley  and Ruano Bogislav had boarded this ship prior in Cherbourg, France.

They arrived in New York on the 12 December. This was part of Baba's 8th journey to the West. 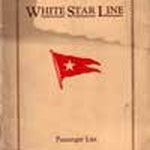 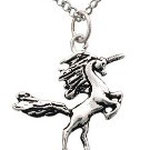 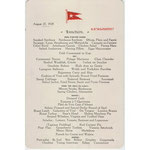 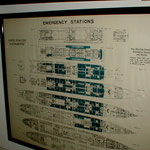 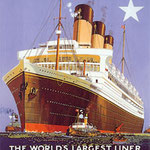 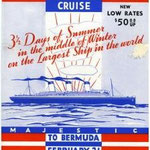 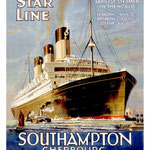 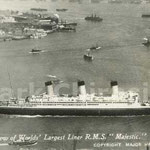 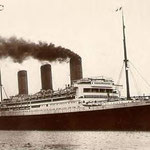 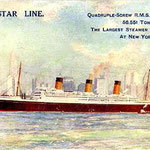 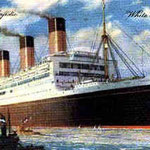 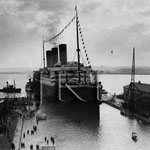 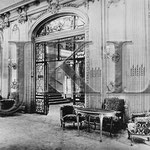 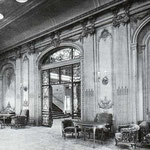 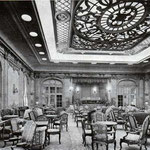 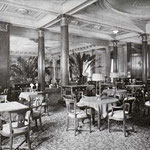 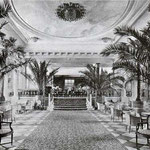 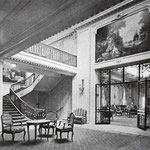 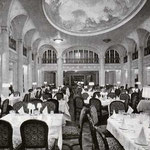 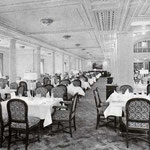 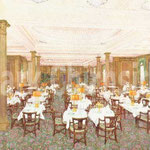 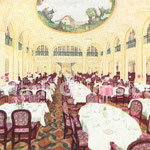 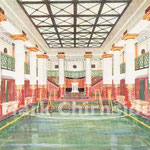 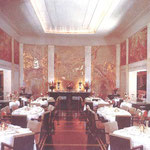 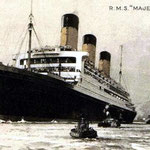 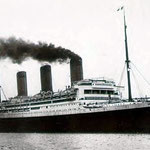 Swimming pool on board the RMS Majestic circa 1922

RMS Majestic, launched in 1914 as SS Bismarck, was, at 56,551 gross tonnage, the largest ship in the world until the completion of the SS Normandie in 1935. Originally slated to be the third and largest member of German HAPAG Line's trio of transatlantic liners, her completion was delayed by World War I. Following the war, she became the White Star Line flagship Majestic. This was the second White Star ship to use the name, the first being SS Majestic (1890). After her White Star career, she served the Royal Navy as the training ship HMS Caledonia. 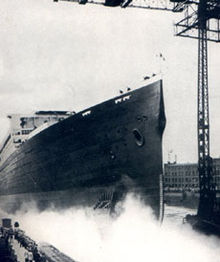 The launch of the Bismarck.

The Bismarck was built by the Blohm & Voss shipbuilders in Hamburg, Germany and was launched on 20 June 1914 by Countess Hanna von Bismarck, the granddaughter of the 19th century German Chancellor Otto von Bismarck. The ship was to have been the flagship of the Hamburg America Line and the final of Albert Ballin's "Big Three" (the other two being the Imperator, which later became the RMS Berengaria, and the Vaterland, which later became the SS Leviathan). Interestingly, she was to have been the same size as Vaterland, in both tonnage and length, but a miscommunication that Cunard's Aquitania would be larger made HAPAG demand an extra six feet in length, increasing her gross tonnage. Of course, Blohm & Voss were quite upset when they found out that the extra work that went into Bismarck was for nothing, as Aquitania was a full 50 feet shorter than both Vaterland and Bismarck. However, the First World War was to completely alter the ship's fate, and she never sailed under the German flag except on her sea trials in 1922. After being ceded to Britain under the terms of the Treaty of Versailles, the as-yet uncompleted ship was purchased jointly by the White Star and Cunard Lines, together with Imperator. The two ships remained jointly owned until 1932, when Cunard terminated the joint ownership agreement.[1]

However, the ship's handover went far from smoothly. Furious at being forced to complete the ship for British owners, the shipbuilders completed the ship in the colours of the Hamburg-America Line and with the name Bismarck painted on her bow and stern. The workers even used the Captain's Cabin (White Star Line's Bertram Fox Hayes) as a storage closet.

Due to a structural defect in the topsides, Majestic suffered a 100-foot crack in December 1924 and underwent permanent repairs and strengthening along B-deck before returning to service in April 1925. (Small cracks were noted on her sister Leviathan around the same time but only minor repairs were carried out and she suffered a similar 100-foot crack five years later.)

In 1925, she completed an eastbound crossing at 25 knots, which was the fastest she ever managed, and faster than either of her sisters' best efforts. However, her older sister Leviathan often had a slightly higher average speed each year than Majestic.

In 1928, Majestic was extensively refitted and modernised and enjoyed a boom year for passenger lists, but numbers fell slightly in 1929 and then the Great Depression set in by 1930.

In 1934 in the North Atlantic an enormous wave smashed over the bridge of the RMS Majestic, injuring the first officer and White Star's final commodore, Edgar J. Trant, who was hospitalised for a month and never sailed again.

Following the merger between the White Star Line and Cunard in 1934,[2] Majestic served the new company until 1936. In 1935, it was announced that her sister Berengaria would be retired first after several fires onboard caused by the original wiring and Cunard arguing with the American Board Of Trade who stated that the ship was no longer fit for American travellers, but the decision was reversed and Majestic was retired instead.

HMS Caledonia departs for Rosyth, Scotland. Note that the funnels and masts have been shortened, and most lifeboats have been removed.

After being laid up at Southampton, she was sold on 15 May 1936 for scrap to TW Ward. However, due to a stipulation in her original agreement of being a prize of war handed over to the White Star Line as compensation for lost tonnage, she could not be sold to the Admiralty, so an exchange was set up where the shipbreakers were given 24 outmoded destroyers as compensation for the equivalent scrap value of the Majestic. In July 1936 the ship was converted into a Cadet training ship and renamed HMS Caledonia.

The conversion of the Majestic was undertaken at Southampton and comprised the shortening of her masts and funnels so that she could fit beneath the Forth Bridge and a reduction in the number of lifeboats.

On 8 April 1937, the Caledonia departed Southampton for her new base in Rosyth and was commissioned on 23 April 1937, with a capacity of 1,500 cadets.

After the outbreak of World War II, the cadets were removed to accommodation ashore and the ship's berth was emptied for Naval use, Caledonia being temporarily anchored in the Firth of Forth pending a decision as to her disposal.

On 29 September 1939, Caledonia caught fire and burnt out, sinking at her moorings. The wreck was sold in March 1940 to Thomas W. Ward for scrap, but it was not until 17 July 1943, that the hulk of the Caledonia was raised and towed to the scrapyard.