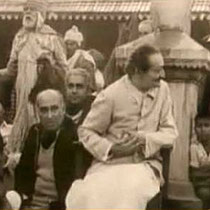 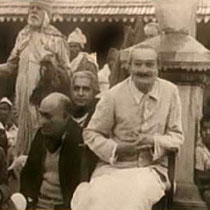 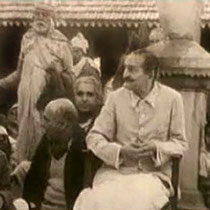 MY EXPERIENCES WITH AVATAR MEHER BABA

It was in 1920 that I was returning from Panchgani to Ahmednagar after giving my examination. On the way I had to pass through Poona. There I received a letter to take to my aunt from Poona. We were to go by Madras Mail which was to leave Poona Station after midnight. My aunt however told me that we should start earlier, as she had to meet someone on the way. We went in a tonga which passed through the Ferguson College Road, where Meher Baba was in a jhopdi. Asking me to stay in the tonga, she went inside the jhopdi. From inside the tonga I noticed a group of people sitting there with a little fire burning and one of them was playing the dholak and singing ghazal. Later on, Baba asked my aunt as to who was sitting in the tonga. She said: "Don't worry, he is my nephew coming from Panchgani." Baba told her, "You call him; I have got much work to be done by him, later on." So I went to him and sat near him. He patted me on my head and then on the back and asked me what I was doing. He then asked, "What do you want to do for the future?" I said, "Of course, I have to pass Matric and go to College and then do as to what is destined in my future." He asked me to give up education and everything and go unto him. Being young in heart, young in spirit and young in age, I immediately accepted it and today I am His disciple. He patted me and said, "I would like to make you King"; and today I am a King. This is how I contacted my beloved Baba.

Now, I will relate one incident or 'chamatkar' performed by Baba. There are always many instances, which we may call Baba 'chamatkar' or miracle. Baba used to say, 'I don't perform any 'chamatkar'. It is the individual faith and the individual love that makes it and you call it 'chamatkar:' Baba was very fond of newspapers and my brother, Adi used to give him the 'Times of India' and read it for him. When Japan entered the Second World War and there was panic everywhere in India, Baba once took us round for a discussion as to what will happen in the future. After a heated discussion, I said: "Baba, why should you worry in Ahmednagar. Japan is not going to Ahmednagar and throw bombs." Baba said, "A bomb will be thrown in Ahmednagar and it will be in your compound." We thought it was a joke and just forgot that incident for the next 5 - 6 months. In 1942, there was the 'Quit India Movement' throughout the country and it was 25th December. My cinema hall office and Baba Centre, all these were in one big compound. On that Christmas night we were screening an English picture in the cinema. During the second show the audience was about 1200 British soldiers and about 230 British officers. After the interval there was a big explosion, and at that very moment in the compound the soldiers and officers were moving about and I was closest to the explosion. 12 soldiers were completely blown out and some lost limbs and some were injured; my brother-in-law had an injury on his head. Immediately, my memory went to that conference of Baba, when He said that the bomb will be thrown and it will be thrown in my compound. It was not a Japanese bomb but a hand-grenade thrown by the Congress people. It was another miracle that though I was nearest to the explosion, nothing happened to me. Out of many, this is only one incident in my life with Baba. Where there is remembrance of Meher, there is mercy. Where there is remembrance of Baba, there is protection. Meher Baba is the embodiment of both these.