Kalemama  ( Ramchandra Bapuji Kale or R. B. Kale - was commonly knows as Kalemama in Meher Baba's circle)  was Meher Baba's close companion and one of the earliest Mandali,  since 1926. A Civil Engineer by Profession, Kalemama held a number of responsible positions in Maharastra Govt services, as Chief Executive Officer  of Kolhapur Municipal Corporation, Estate Engineer and Secretary at Dhule etc. Kalemama  was one of those rare disciples of Baba who also had the rare opportunity to meet Shri Sai Baba, Shri Upasni Maharaj and Shri Narayan Maharaj, a number of times. The Wedding of one of Shri Sai Baba's very well known disciple Mr. Bhate's daughter was proposed with Kalemama's elder brother Anna ji. Shri Sai Baba called the families to Shirdi, and Kalemama spent his Winter holidays at the Shirdi Ashram in 1910. Kalemama along with Mrs. Kalemama and Murli came to settle at Meherabad Ashram after accepting Meher Baba as their spiritual guide. Kalemama being a civil engineer supervised a number of construction activities at Maherabad. Mrs. Kalemama passed away at Meherabad in 1932 and Kalemama on 16 Sep,1954. 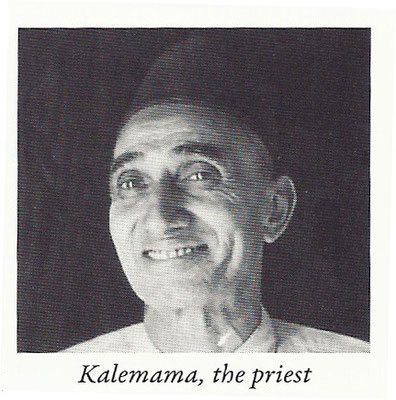 Kalemama or Ramchandra Bapuji Kale was born in Kolhapur, a city of Maratha Rulers. His father Bapuji Kale was a Minister in the personal court of Maharaja of Kolhapur. Kalemama, born in such a influential family which had links with the Royal families of Kolhapur, received the best during his childhood and youth. He graduated as a Civil Engineer from Bombay.

During the British rule in India, holding a degree in Civil Engineering promised a bright career. Kalemama served as Chief Executive Officer of the Kolhapur Municipal Corporation , Secretary of Dhule Municipal Corporation, State Engineer at Akkalkot Sansthan and at many other places until he met Meher Baba and came to Meherabad for a final stay, which lasted until the 16th of September 1954, when he rested in peace in Baba.

Kalemama met Shri Sadguru Sai Baba of Shirdi which changed the course of his life. After Sai Baba dropped His physical body in 1918, Kalemama met Meher Baba at Ahmednagar in 1926. His wife Mrs. Janki, more often referred to as Mrs. Kalemama passed away in 1932, at Meherabad. Meher Baba had included her name in the list of 120 dear departed souls whom He paid a homage, as a token of love and gratitude. It was a gesture of love for their surrenderance and unquestionable faith in Meher Baba, during the hilly walks of life. It was on the 16th of September 1954 when Kalemama passed away at Meherabad. Kalemama's son Murli was staying at Jabalpur at that time practicing Homeopathy, as permitted by Meher Baba.

Kalemama had a well settled family. One of Kalemama's daughter was married to Dr. Bhadbhade of Indore and another was married to Rao Saheb Pandit, an Eminent Educationist and founder of the "Sanjeevan Vidhyalaya" at Panchgani, an institution that has now gained eminence in the field of education in various disciplines. Murli's elder brother Shreedhar, affectionately called Babu, was also at Panchgani and Babu's wife Nirmala was the Matron of Central Jail Jabalpur.

Later from April 1910 to May 1911 Kalemama was appointed Secretary of Pandharpur Municipal Corporation. During this period, the glory of Sai Baba had spread throughout Maharastra and many a Government officers and learned persons became his devotees. At Pandharpur Mr. Rale and Mr. Patwardhan were disciples of Shri Sadguru Sai Baba. They requested Kalemama to visit Shirdi for Sai Baba's darshan. The threesome along with Justice Hatyangadi of Pandharpur made their way to Shirdi and met Sai Baba and attended the two days function during the last week of December 1910. At Shirdi some Government officers and some of the prominent solicitors of Bombay had also come to attend the gathering as during the winter vacations it was convenient to make a pleasure trip with families. Until Sai Baba's darshan Kalemama had never heard of Shirdi and he felt very happy to attend the function at Shirdi.

Kalemama stayed at Shirdi for two days and returned back to Pandharpur. After sometime, Kalemama's elder brother Krishnaji's (referred as Anna Kale in Lord Meher) first wife died of Plague, on 1st February 1911, at Solapur. To find peace after the loss, Anna ji came to Kalemama for a stay at Pandharpur expecting a change. Meanwhile one of Kalemama's close relations Justice Noolkar had taken voluntary leave from his job and was staying at Shirdi in service of Shri Sai Baba. Justice Noolkar's friend Mr. Bhate had also resigned from his job and was serving Sai Baba at Shirdi. Kalemama received a letter from Justice Noolkar proposing marriage of Shri Bhate's daughter (who was slightly over age) with his elder brother Krishnaji and invited Kalemama to bring his elder brother to Shirdi for Sai Baba's darshan and approval. Kalemama along with his elder brother accordingly went to Shirdi perhaps in February or March of 1911 and met Sai Baba.

On reaching Shirdi Kalemama and his brother Anna kept their luggage at a suitable place and walked towards the Mosque in which Shri Sai Baba was staying. As it was around noon, Shri Sai Baba was alone inside the mosque. Kalemama and Anna went inside and bowed down to Shri Sai Baba in reverence.Sai Baba asked them for two rupees. Kalemama had only two rupees in his pocket which he gave to Sai Baba immediately. On receiving the money, Sai Baba asked for four more rupees but Kalemama had no money in his pocket. The only thing he had in his pocket were the keys to his suitacase which he handed to Shri Sai Baba and at the same time asked Anna to go to the place of their stay and bring the money desired by Sai Baba. Kalemama has written in his notes that during this meeting, Sai Baba was very pleased to meet them and made a very significant remark. While waiting for the money and Anna ji's return, Sai Baba said to Kalemama in marathi "You are one amongst us", " When you intend to come again". ("Tumhi tar Amchyat le" , "Punha Kevha yenar")To this Kalemama replied instantly " When ever You may kindly bring us again".

By this time, the four rupees desired by Sai Baba were brought and given to Him by Anna. Both of them stayed in the company of Sai Baba for some more time and then returned back to their place of stay. Kalemama felt thrilled over the peculiar statement made by Sai Baba "You are one amongst us" He however could not attach any significance to this conversation, until later in his life. Pondering over the mystical words of Sai Baba, Kalemama resumed his work and served for a few more years at Akkalkote.In 1917 he left his job and decided to move to Kolhapur.

The very next year while Meher Baba was at Nasik in December 1928, Kalemama along with his elder son Shreedhar (also known as Babu) decided to go to Nasik. From Dhule they boarded a train and reached Nasik at 4 a.m. and went to one of Kalemama's friend Vinayak Dhamankar's residence. At daybreak, they went to search for the place where Meher Baba was staying but found to their surprise that Meher Baba and the Mandli had left the previous evening for Meherabad. It was around 7 a.m. and Kalemama and his son Babu were utterly disappointed to learn that Baba had already left Nasik. They decided to leave Nasik as it was early in the morning so as to reach Ahmednagar and Meherabad at the earliest.

Kalemama thought of requesting one of his friends R. D. Karmarkar who was an Engineer at Nasik to kindly take them both in his car to Manmad immediately, so that they could board some train to Ahmednagar and reach Meherabad by the afternoon on the same day. On reaching Karmakar's house , Kalemama made his request and was pleasently surprised that his friend agreed instantaneously to his request. Shri Karmarkar suggested that instead of going to the Manmad Railway Station it would be better for them to go to the Yewala station as Shri Karmakar also had some construction work to supervise there.

Karmakar, Kalemama, his son Babu and one Mr. Dhumal who was a noted Advocate and Chairman of the Local Board School proceeded accordingly to Yewala. While talking to each other in the car, Dhumal came to know that Kalemama was going for Meher Baba's darshan. Dhumal was himself a disciple of Shri Sai Baba and suggested that they may go to Shirdi, take their lunch and then proceed further. This was agreed and they all reached Shirdi had lunch at Shirdi and then darshan of Sai Baba's Samadhi. At this point, Kalemama felt that they had come so near to Sakori (which was just a few miles) and they should go to Sakori for Upasni Maharaj's darshan. All again agreed to this suggestion made by Kalemama and went to Sakori and met Shri Sadguru Upasni Maharaj. Finally when they reached Meherabad, they came to know that Meher Baba had gone to North India and the Gateman at Nasik who told them that Baba had gone to Mehrabad did not have the correct information.

Kalemama was sent to Sakori by Meher Baba along with a few other disciples to attend the last rites of Shri Upasni Maharaj, when Maharaj dropped His body in December 1941. Kalemama remained with Meher Baba till his last breath. He passed away at Meher Baba's Ashram on 16th of September 1954.Kalemama's son Murli lived with Meher Baba as a close Mandli and had endeared Meher Baba with his bright and jolly mood in the difficult situations of New Life. Later Murli was permitted by Meher Baba to go to Jabalpur and settle down vide New Life Circular No 27. Also during the New Life which was full of helplessness and hopelessness,  Meher Baba appreciated Murli very highly with all words at His command for Murli's exemplary and jolly mood during the hardships of the New Life.

Mrs. Kalemama (Janki) came to Meherabad ashram with Kalemama after 1929 and became a part of the residents staying in Family quarters until she suffered from heart ailment and died on 14th March 1934 early morning at 3.30 am. Baba went to the Family Quarters to see her on Tuesday, 13 March 1934. She felt so happy at seeing Baba that she forgot her pain. Baba assured her, “You will be freed tomorrow. Do not worry.” Her cremation was done at Meherabad. After the death of his wife, Kalemama moved to the men mandali’s quarters and lived there the rest of his life until 16th Sep 1954 when he also died, and cremated at Lower Meherabad.  Her name was included in the list of dear departed ones by Baba, along with her daughter Chingutai (Mrs. Manorama w/o Rasaheb Pandit ).

During November 1929, Baba went to the Pandu Lena Caves several times and once visited Gangapur Falls. On Saturday, 30 November, Kalemama came to Nasik with his wife Janki and his elder brother Krishna Rao “Annasaheb” Kale. Baba personally looked after them and ordered the best arrangements for their stay, for these three individuals were soon to become permanent members of his mandali.
[Lord Meher Page – 1124]

During this same period, Kalemama’s wife Janki was seriously ill with heart trouble. Baba went to the Family Quarters to see her on Tuesday, 13 March 1934. She felt so happy at seeing Baba that she forgot her pain. Baba assured her, “You will be freed tomorrow. Do not worry.” The woman expired at 3:30 A.M. that night and was freed forever by the God-Man. After the death of his wife, Kalemama moved to the men mandali’s quarters and lived there the rest of his life.
[Lord Meher Page – 1592]

The above contents describing Janki is courtesy of the Meher Trust India.