Meher Baba and his entourage arrived in Los Angeles on the 31st July and departed on the 3rd August for San Francisco. On the 3rd and last day they visited Meher Mount.

This page only highlights the first two days of Baba's visit to LA., as in a time-line.

A more comprehensive version of the visits to these locations are found on the indivual pages.

The Ojai - Meher Mount visit is highlighted on its own page. See the index on the left of screen.

You can also access the individual pages for all of these locations by clicking on the under-scored names or places.

Click on the button for more information on this airport.

Click on the button for more information on this flight.

It was drizzling with rain and fog had settled when Meher Baba and his group arrived from Washington DC. on American Airlines - Flight 655. Baba had sat at the tail end during the flight.

He was then driven to the Roosevelt Hotel , the rest of the group and luggage came by chartered bus.

Meher Baba was interviewed and photographed by the LA Times newspaper later that morning.

Click these buttons to visit the pages in "Locations Gallery "  about this visit in California by Meher Baba . 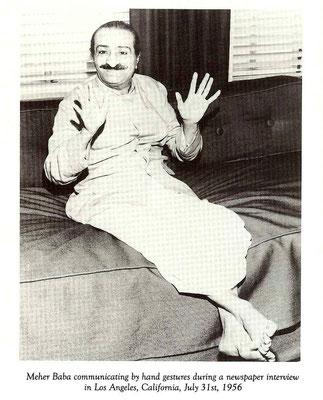 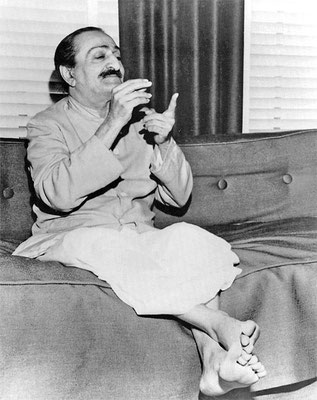 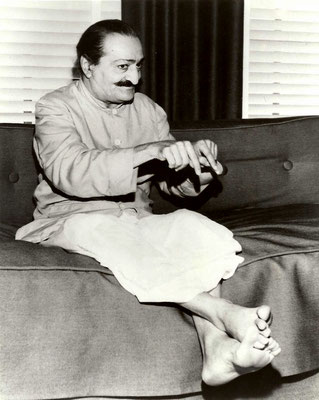 Afterward, at 4:45pm,  Meher Baba and his group arrived at Hilda Fuchs' home in West Hollywood. There were about 30 friends gathered. Click on the button to see more.

In the early evening Meher Baba and the group travelled the 1-2 blocks to The Garden of Allah restaurant.

After this reception Meher Baba and his group returned to their hotel.

The morning started early for Meher Baba with lots of interviews, the mezzanine of the Roosevelt Hotel was jammed with people. A large hall had been opened behind the interview room to accommodate the crowds.

These interviews lasted throughout the day. Baba retired to his room for rest before his visit to the home of Colleen and Dante Leo Cardella in West Hollywood.

Every Wednesday, a group of spiritual seekers met at Dante's apartment, and he was anxious that Baba address the group.

At 7pm, Baba was driven to the apartment at 1401 North Detroit Street, Apartment #1, where about 50 people were waiting in hushed expectancy for him.

We are indeed fortunate to have Meher Baba, who is a very great Spiritual Teacher and Master, with us. He represents, and more importantly is, a divine incarnation. Those of you who have studied more deeply will know what that means. There is no way to measure Baba intellectually because Baba's greatness can only be measured, in the final analysis, with the heart.

For the full account of the visit to the Cardella home click on the button above or the under-lined name here.

Meher Baba and his group then departed back to the Roosevelt Hotel.

From four o'clock in the morning on Thursday, 2 August 1956, preparations were being made to drive 85 miles to Ojai, California, where Agnes Baron had established a lovely hilltop center for Baba called Meher Mount. Filis came to the hotel early and saw Baba.

Click on the under-lined name or the button below to see details of that visit.