Click these buttons to visit the web pages in "Locations Gallery "  about locations visited in Australia by Meher Baba .

This visit of Meher Baba was the second to Australia, the first visit occurred in the winter of 1956 in which Baba travelled and stayed briefly in Sydney, the capital of the state of New South Wales and then to Melbourne, the state capitol of Victoria. Both visits to Australia followed intense scheduled visits to the U.S.A. where the season there was summer, hence Baba wearing heavy winter clothing for the southern hemisphere's cold winter weather.

Click on the following button to visit the web page for the 1956 Australian visit. 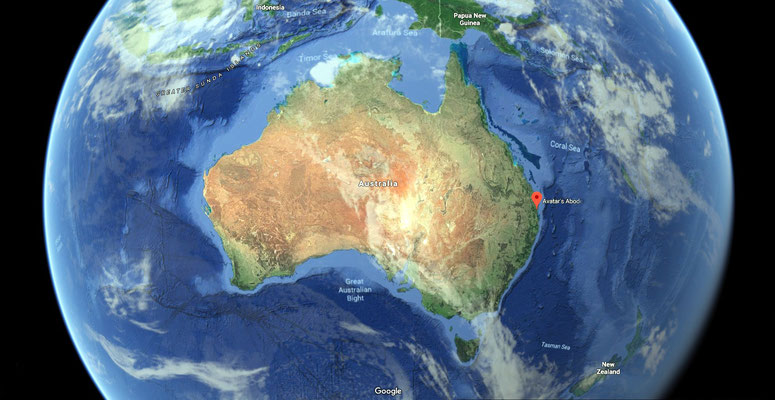 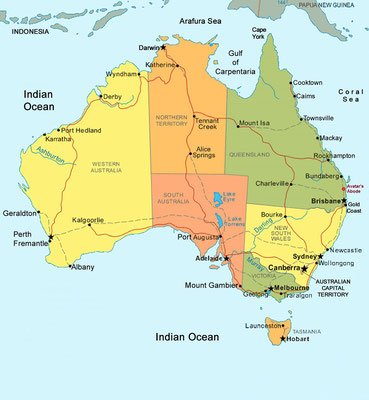 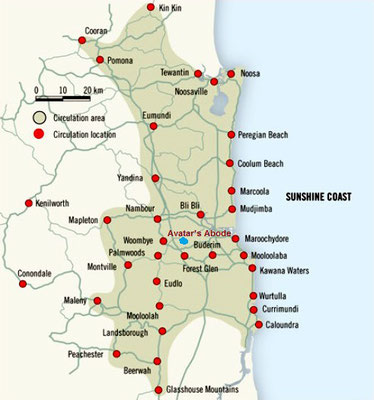 Meher Baba flew into Sydney's Mascot Airport on the 2nd of June 1958, on a Qantas Lockheed Super Constellation aircraft,  accompanied by 4 of his close men followers ;

That same afternoon - they took another flight north to Brisbane, the state capitol of Queensland. There is no record of the plane types or flight details on this journey within Australia. The group and others, stayed a night at the Bellevue Hotel in Brisbane and the following morning of the 3rd June, they all drove to the Avatar's Abode property. 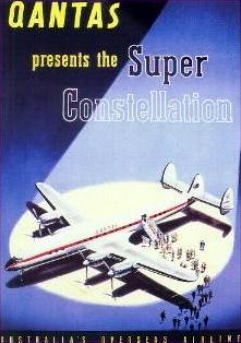 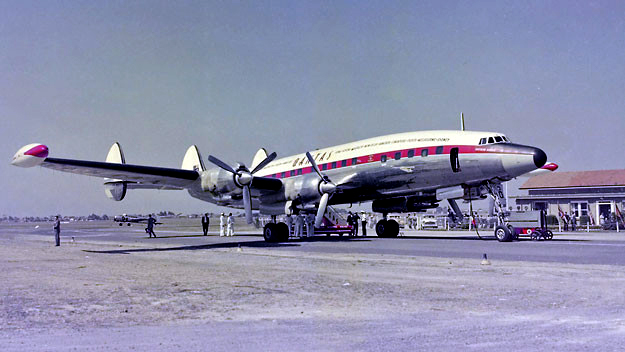 The plane flew from Melbourne eastward along the “Southern Cross” route to Sydney, Nadi, Honolulu, San Francisco, New York and London and back the same way. It's unclear whether the plane landed on Kanton Island in the Pacific Ocean to refuel and the plane route that flew Baba to Australia in 1956. 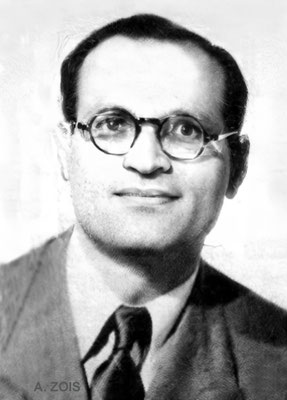 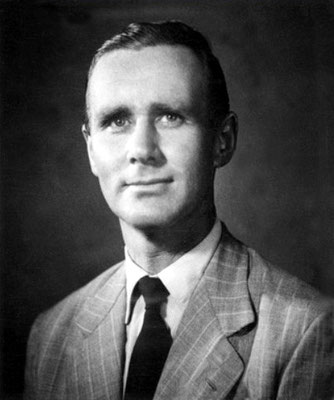 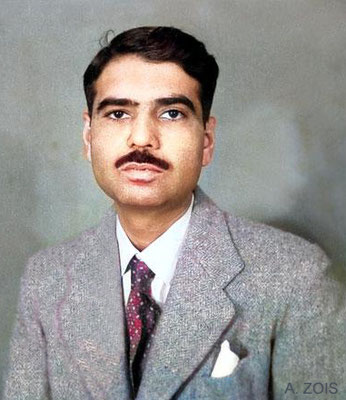 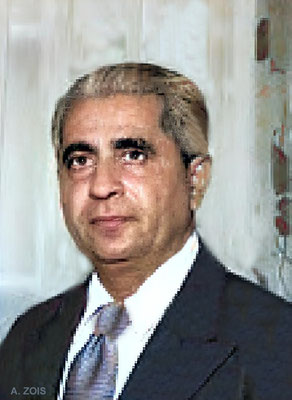 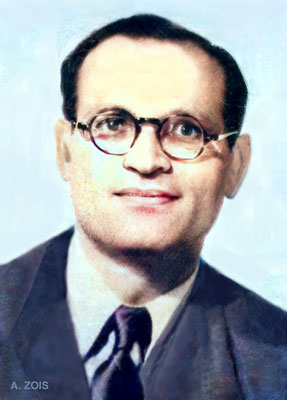 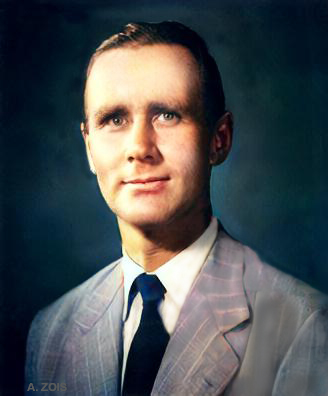 Almost as soon as Francis Brabazon learnt of Baba's plans to have a Sahavas in Australia, he set about locating a place that would be suitable to hold it. He drove far and wide — to the Blue Mountains west of Sydney and up into the New England Highlands near Armidale, as he felt a city was not the best place for a center. Then, on 11 January 1958, Mani ( Irani )sent the following letter to the Australians:

As in the USA, Baba will give his Sahavas in Australia at one place only. Baba leaves the Sahavas arranging to Francis, with loving and willing co-operation and help from all as possible. Baba has outlined the main points, and leaves the details to you. For the site of the Sahavas: Baba gives first preference to Queensland, and second preference to Beacon Hill. Baba would like Queensland if the climate is good during June, and if the place is practical from all angles — finance, convenience, climate, accommodation for all, etc. But you should not feel bound by this. If Queensland is not found to be practical from the above mentioned points then you should drop the idea and make arrangements at Beacon Hill for all concerned. If Queensland is found practical, then it would be ideal — for Baba would be blessing with his presence yet another part of Australia. Baba wishes Francis to let him know which is decided ... 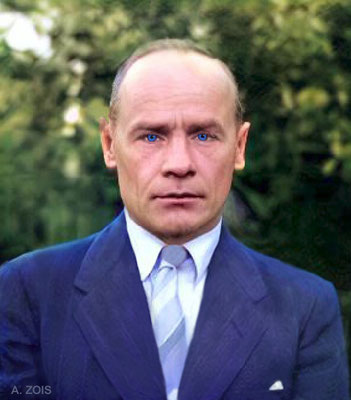 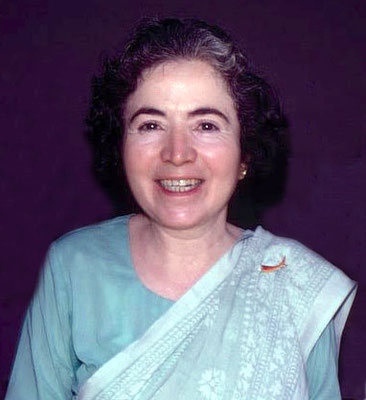 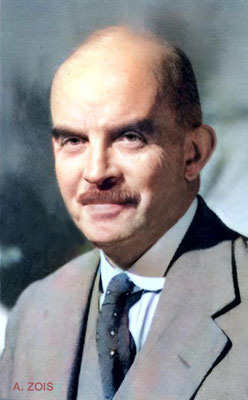 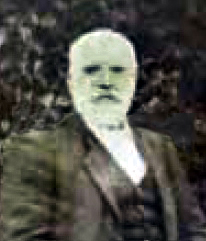 This was a total surprise. Neither Francis nor any of the Australian Baba group had any connections to Queensland, or had even visited there before. However, Francis knew that Baba would prefer a warmer climate for his Sahavas during the Australian winter (which begins in June), and as Baba had indicated a "preference," Francis decided he would do everything possible to make it happen, despite the limited time.

Within a week of receiving the letter, Francis was driving around hillside locations in Queensland including Tamborine Mountain and Buderim. Finally he came across a run-down 82-acre pineapple farm on Kiel Mountain. It had been started 88 years earlier by Heinrich Kiel, the descendant of a German Lutheran missionary. 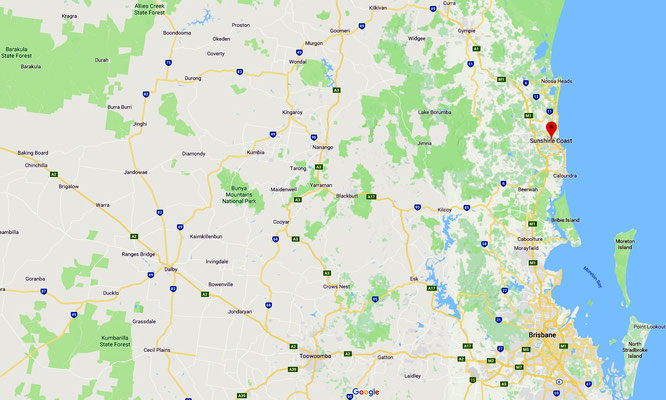 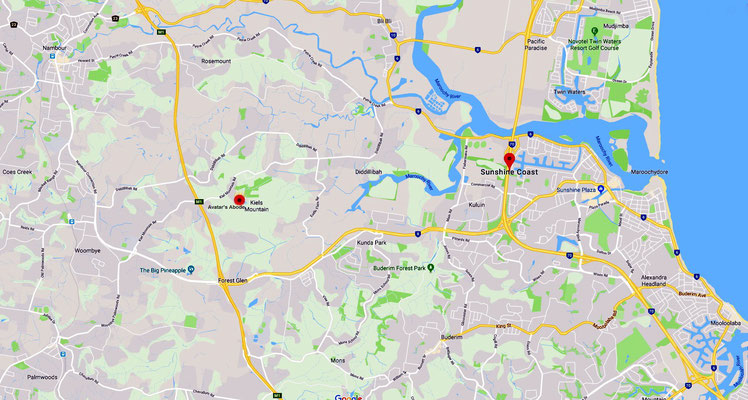 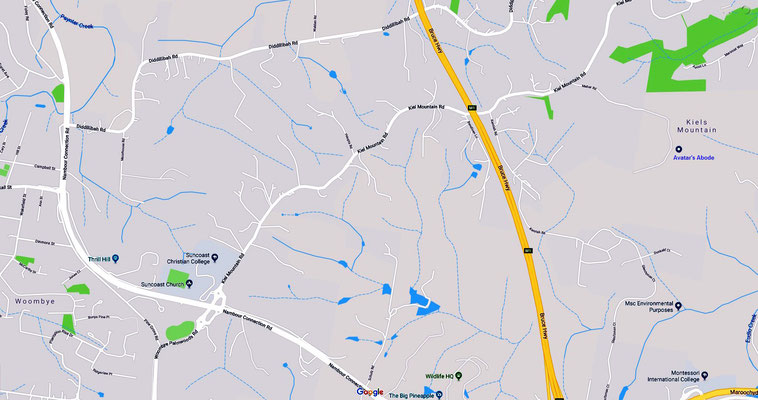 The site lay 75 miles / 120 kilometers north of Brisbane. Francis felt he had found the right place. Francis cabled Baba a detailed description. Baba cabled back that the spot was "excellently suitable."

Using money received from the late Baron von Frankenberg's estate, Francis purchased the property, which Baba later named Avatar's Abode. Being on the summit of a 450-foot hill / 137 meters, Avatar's Abode had 360-degree views — out as far as the Pacific Ocean (some six miles to the east). The region — the Sunshine Coast — was sub-tropical, renowned for its surf beaches, rain forest waterfalls and small fruit and dairy farms. It was an area dotted with tiny church halls — one of the most religious regions of Australia.

For the 1958 Sahavas in Australia, Baba and the mandali flew from San Francisco on Qantas Flight 743/032, at 11:00 A.M., on Saturday, 31 May 1958. After stopping in Honolulu at 6:15 P.M., where they had a four-hour layover (and a complimentary dinner, courtesy of Qantas), crossing the international date line and again stopping in Nadi, Fiji the following morning at 8:00 A.M. for half an hour (where they had tea), they arrived in Sydney at 3:30 P.M. on

Upon arrival at the Sydney Airport, they were met by newspaper reporters. In talking with them, Adi said, "Meher Baba knows everything. He knows what you are thinking now."

One reporter asked, "What am I thinking now?"

Exchanging a glance and smile with Baba, Adi replied, "Baba knows but he won't tell you."

From Sydney Airport, Baba and the mandali departed by Trans Australian Airlines ( TAA ) for Brisbane at 6:15 P.M. They arrived that night around 8:45 P.M. Baba walked slowly across the tarmac steadied by Eruch's arm. They were met by Francis, Bill Le Page and John Bruford and stayed at the Bellevue Hotel overnight. Bill had chosen the spot because at the time it was the most scenic area of Brisbane — adjacent to Brisbane's tropical Botanic Gardens and the State's majestic Parliament House. Also the Bellevue was a beautiful hotel that contained a small ground-level cottage where Baba could enjoy some privacy. Thus Bill was quite disappointed when Baba complained he had one of his "very worst nights" there. Unforeseen by Bill, trucks used the night hours to unload large quantities of beer barrels for the hotel's use. The noise from this had apparently kept Baba awake.

The next morning, Tuesday, 3 June 1958, Baba called Francis and Bill into the cottage of the hotel and asked them about arrangements for the journey, checking that all had been done.

The group left Brisbane around 9:00 A.M. John Bruford drove Baba, Eruch and Francis to Woombye in his new Peugeot 403. Bill followed in another car with the other mandali. This was a long drive through small towns, countryside and forest. The Australians pointed out to Baba the Glasshouse Mountains (strangely-shaped volcanic plugs). The group had only one stop — at Beerburrum, where they refueled and telephoned the others that they would soon be arriving. John Bruford had been most particular when purchasing this new car and was thrilled Baba was riding in it.

They arrived at Avatar's Abode at 11:20 A.M. — somewhat earlier than expected because along the way, for part of the journey, Baba had asked John to drive very fast. John was a one-footed driver due to polio and probably would have considered being a race car driver if he had been physically able! He enjoyed driving fast and so took full advantage of the opportunity. But he was perspiring terribly because the car's windows were rolled up as Baba wished, and the heater was turned on. 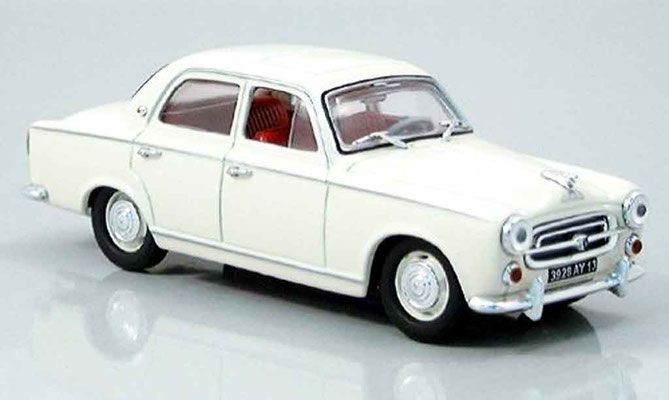 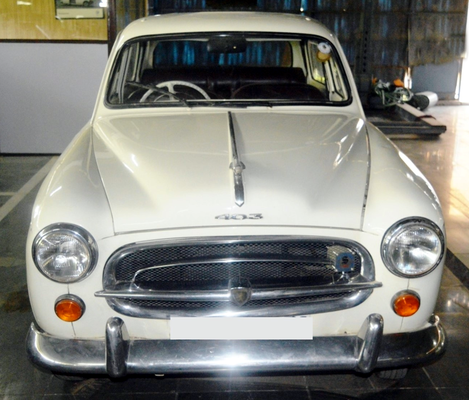 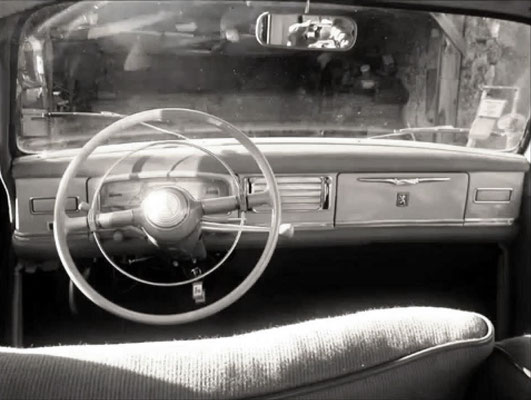 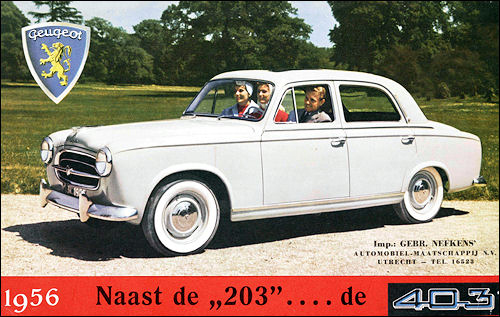 Most of the following photos were taken mostly by Colin Adams and are courtesy of the Avatar's Abode Archives.

Colin Adams was the son of Stan & Clarice Adams who with his other siblings Cynthia and Noel all traveled to Avatar's Abode to meet Meher Baba. They had all met him 2 years earlier when Baba visited their home city of Melbourne, Victoria on Baba's first visit to Australia in 1956. Stan Adams was teaching Colin about photography, he himself was a film cameraman for the Australian Government. The photos that Colin took were given to the Avatar's Abode Archives in 2016 by his sister Cynthia. 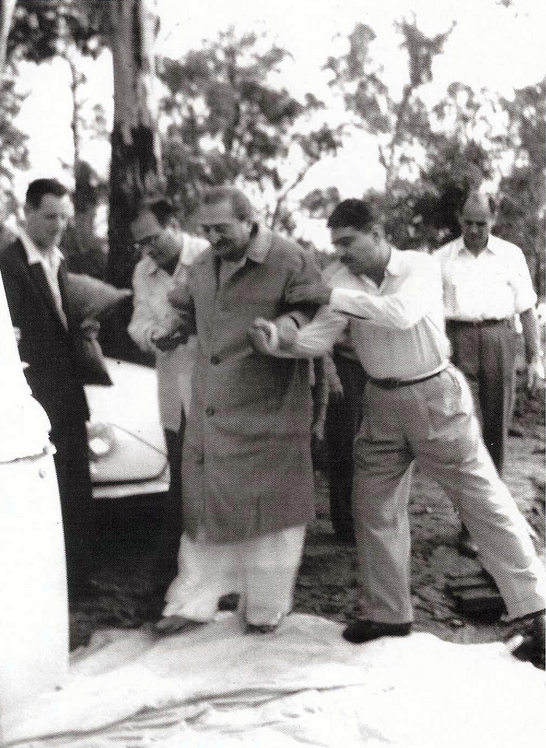 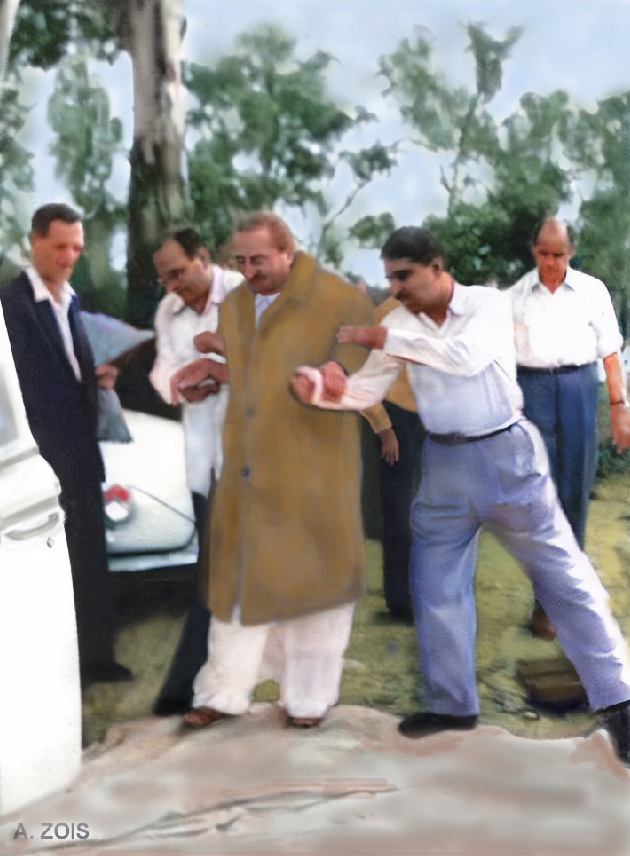