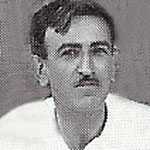 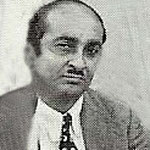 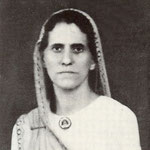 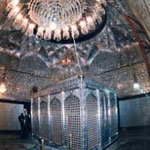 The plane Meher Baba and his men flew in was called the "Hadrian" - one of 8 plane in the Hadley-Page Imperial Airways fleet. Each plane was given a name.
Hadrian's registration was "AAUE"  No.42 / 2

Click below to learn more about the plane flown in.

At the time when Meher Baba's plane landed at Gwadar, this area was governed by Muscat on the other side of the Gulf of Oman. This land was purchased by Pakistan in 1958. 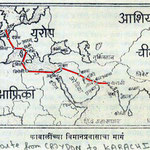 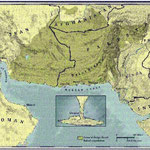 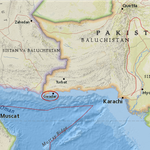 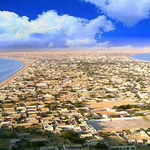 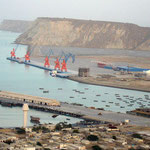 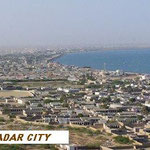 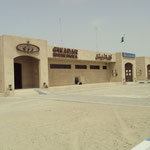 Gwadar ( Balochi:گوادر ), (Gwadur) is a planned free trade port city on the southwestern warm water Arabian Sea coastline of Pakistan in Balochistan province. It is the district headquarters of Gwadar District and, in 2011, was designated the winter capital of Balochistan province.[2] Gwadar has a population of approximately 85,000. It is about 533 km from Karachi and 120 km from the Iranian border. Gwadar Port is located at the mouth of the Persian Gulf, just outside the Strait of Hormuz, near the key shipping routes in and out of the Persian Gulf. Gwadar Port is a strategic warm-water deep-sea port developed jointly by the Government of Pakistan and the Government of China at a cost of USD $248 million and officially opened by the President of Pakistan on 20 March 2007.[3] 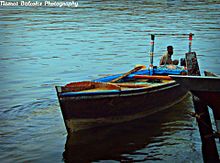 Gwadar is one of the few planned cities in Pakistan (others being Faisalabad, Jauharabad, and Islamabad), which have been developed from scratch under an urban master plan. Before its development as a port city, the town was a fishing village. A master plan for the development of Gwadar City with land zoning and internal infrastructure networks was approved by the Government of Pakistan in 2003. The Gwadar Development Authority (GDA) is charged with the execution of this master plan. A major part of its current work program is focused on the fast-track construction of roads, other infrastructure and public buildings. The provincial government of Balochistan has started with the development of infrastructure for the industrial parks located east of the city. Related to this rapid development, the population growth rate of Gwadar has accelerated during the past two years. The current population of Gwadar city is estimated at around 85,000 and is expected to reach half a million in about five years.

In 2013, Gwadar Port operations were officially handed over to China [4] Under the contract with China, the port will be further developed into a full-scale commercial port, with an initial construction investment of $750 million.[5] The port is said to be strategically important to China because it will enable China to more safely and reliably import oil. Currently, sixty percent of China’s oil must be transported by ship from the Persian Gulf to the only commercial port in China, Shanghai, a distance of more than 16,000 kilometres. The journey takes two to three months, during which time the ships are vulnerable to pirates, bad weather, political rivals and other risks. Using Gwadar port instead will reduce the distance these ships must travel and will also enable oil transfers to be made year-round. [6]

In February 2013, Iran announced it would set up a $4 billion oil refinery in Gwadar with an estimated capacity of about 400,000 barrels per day. According to the plan, Tehran will also construct an oil pipeline between its territory and Gwadar to transport crude oil for processing.[7][8] It has also been announced that, under China’s coastal refinery plan, China will invest $12 billion in multiple projects in Gwadar and other parts of Pakistan, including construction of a refinery which will have a processing capacity of 60,000 barrels of crude oil per day.[8]

According to a folk etymology, the name Gwadar is a combination of two Balochi words, "Gwat" (meaning "air") and "Dar" (meaning "door").

Inhabitation of Gwadar, like most areas of Balochistan, appears to be ancient. The area shows inhabitation as early as the ancient Bronze age people where settlements existed around some of the area's oases. The Baloch people of this area originally referred to themselves as Moka or Maka. It is from this that word Makran, the original name of Balochistan is derived.It was a region of the Achaemenid Persian Empire. It is believed to have been conquered by the founder of the Persian Empire, Cyrus the Great. The capital of the satrapy of Gedrosia was Pura, which is thought to have been located near the modern BampÃ»r, in Iranian Balochistan. During the homeward march of Alexander the Great, his admiral, Nearchus, led a fleet along the modern-day Makran coast and recorded that the area was dry, mountainous, and inhabited by the "Ichthyophagoi" (or "fish eaters"), an ancient Greek rendering of the ancient Persian phrase "Mahi khoran" (which has itself become the modern word "Makran").[9] After the collapse of Alexander's empire the area was ruled by Seleucus Nicator, one of Alexander's generals. The region then reverted to indigenous rule around about 303 BCE.

The region remained on the sidelines of history for a millennium until the Arab-Muslim army of Umar captured Makran in 643 CE and over the intervening (and nearly equivalent) amount of time the area was contested by various powers. This was then followed by almost two centuries of local rule by the various Baloch tribes. The city was visited by Ottoman Admiral Seydi Ali Reis in 1550s and mentioned in his book Mirat ul Memalik (The Mirror of Countries), 1557.[10] According to Seydi Ali Reis, the inhabitants of Gwadar were Baloch and their chief was Malik Jelaleddin, son of Malik Dinar.In the 15th century The Portuguese captured many parts of India and Oman, and they planned to proceed with annexation to coastal area of Makran. The Portuguese attacked Gwadar under the leadership of Vasco de Gama, but under the supervision of Commander Mir Ismaheel Baloch, the Portuguese were defeated by the Baloch. A few times the Portuguese looted and set the coastal villages on fire, but they failed to capture Gwadar . Cannons of the Portuguese army were found lying near the Central Jail of Gwadar, heirless. The grave of Mir Ismaheel Baloch is situated near the Mountain of Batal Gwadar, constructed by Mir Ismaheel Baloch himself during life. He died in 873 Hijri. .[11]

In 1783, the Khan of Kalat granted suzerainty over Gwadar to Taimur Sultan, the defeated ruler of Muscat.[12] When the sultan subsequently retook Muscat, he was to continue his rule in Gwadar by appointing a wali (or "governor"). This wali was then ordered to subjugate the nearby coastal town of Chah Bahar (now in Iran). The Gwadar fort was built during Omani rule, whilst telegraph lines were later extended into the town courtesy of the British. Another point of view is that in the middle of the 18th century, Mir Noori Naseer Khan Baloch captured Gwadar and its surrounding areas after defeating the Gichki Baloch tribe and included it in the Kalat Khanate. However, realizing that maintaining control of the area will be difficult without the support of the Gichkis, Mir Nasir entered into an agreement with the local Gichki Chief, which allowed the Gichkis to maintain administrative control of the area, in return for furnishing half the collected revenues to Kalat, this arrangement continued till 1783. When Saiad Sultan fell out with his brother, the ruler of Muscat, and asked for help, Mir Noori Naseer Khan handed over Gwadar, as part of his share of revenues, to Saiad Sultan for his maintenance with the understanding that the area be returned to Kalat, when Saiad Sultan acquires the throne. Saiad Sultan ascended to the throne of Muscat in 1797 but never returned Gwadar enclave to Kalat. The ensuing struggle between the heirs of the Sultan and Khan of Kalat, for possession of Gwadar, allowed the British to intervene. The British after extracting concessions from the Sultan for the use of the area facilitated Muscat to retain Gwadar. Later on, the British claimed that the area was permanently gifted to the Sultan by Mir Nasir, however, local accounts and the declassified documents of that time refute this claim.[13] 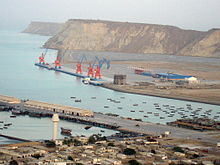 On 8 September 1958, Sir Aga Khan purchased the Gwadar enclave from Oman for $1 million. At the time, Gwadar was a small and underdeveloped fishing village with a population of a few thousand. The Pakistani government integrated Gwadar into Balochistan province on 1 July 1977 as the district headquarters of the newly formed Gwadar District. In the 1993, the Government of Pakistan formally conceived the plan to develop Gwadar into a major port city with a deep-sea port and connect it with Pakistan's highway and rail networks. On 22 March 2002, the Government of Pakistan began construction of Gwadar Port, a modern deep-sea port, Phase I of which was completed in March 2007. Gwadar Port was inaugurated on 20 March 2007.[3]

Gwadar underwent major development from 2002 to 2007. In 2002, Pakistan's National Highway Authority (NHA) began construction of the 653 km-long Makran Coastal Highway linking Gwadar with Karachi via Pasni and Ormara and onwards with the rest of the National Highways of Pakistan, which was completed in 2004. In 2003, the Gwadar Development Authority was established to oversee the planning and development of Gwadar and Gwadar Industrial Estate Development Authority was established to promote industrial activities in mega port city of Gwadar .[14] In 2004, Pakistan's NHA began construction of the 820-km long M8 motorway linking Gwadar with Ratodero in Sindh province via Turbat, Hoshab, Awaran and Khuzdar and onwards with the rest of the Motorways of Pakistan. In 2006, the Gwadar Development Authority conceived, developed and adopted a 50-year Master Plan for Gwadar. In 2007, the Civil Aviation Authority of Pakistan acquired 4,300 acres (17 km2) to construct a new greenfield airport, the New Gwadar International Airport, on 6,000 acres (24 km2), at an estimated cost of Rs. 7.5 billion.

In 2013 Gwadar port was acquired by the state-owned China Overseas Port Holdings Limited.[15] The port is said to be strategically important for China as sixty percent of China’s oil comes from the Gulf by ships travelling over 16,000 kilometres in two to three months, confronting pirates, bad weather, political rivals and other risks up to its only commercial port, Shanghai. Gwadar will reduce the distance to a mere 5000 kilometres and also serve round the year. [6]

China has a great strategic interest in Gwadar. The following are important ones:-[16]

Gwadar is situated on the southwestern Arabian Sea coast of Pakistan in Gwadar District of Balochistan province. Like Ormara further east, Gwadar is situated on a natural hammerhead-shaped peninsula forming two almost perfect, but naturally curved, semicircular bays on either side, namely the Paddi Zirr (West Bay) and Deymi Zirr (East Bay). Gwadar is largely flat barren land with two hills, the Koh-e-Batil (maximum height 449 ft.) at the head of the hammerhead peninsula and Koh-e-Mehdi (maximum height 1,112 ft.) to the east of the city. Following an earthquake in September 2013 a small island called Zalzala Jazeera formed approximately 2 kilometres (1.2 mi) off the coast.

Gwadar is 0–300 meters above sea level and is mainly dry, arid and hot. The oceanic influence keeps the temperature lower in summer and higher in winter as compared to the inland. The mean temperature in the hottest month (June) remains between 31 °C and 32 °C. The mean temperature in the coolest month (January) varies from 18 °C to 19 °C. The uniformity of temperature is a unique characteristic of the Makran Coastal region. Occasionally, winds moving down the Balochistan plateau bring brief cold spells, otherwise the winter is pleasant. In Gwadar, winters are shorter than summers. Although Gwadar is situated outside the monsoon belt, it receives light monsoon showers in summer (June–August). However, in winter, Western Disturbance can cause heavy rainfall. Annual rainfall is only 100 mm (3 inches). In June 2010, Gwadar was lashed by Cyclone Phet with record-breaking rains of 372 mm and winds up to 75 mph.