That night, Baba went to Monte Carlo with Norina and Mercedes D'Acosta to see the casinos. Dressed incognito, he looked stunning; wearing a cape of Norina's and a French beret of Mercedes', Baba blended in well in that risqué atmosphere. 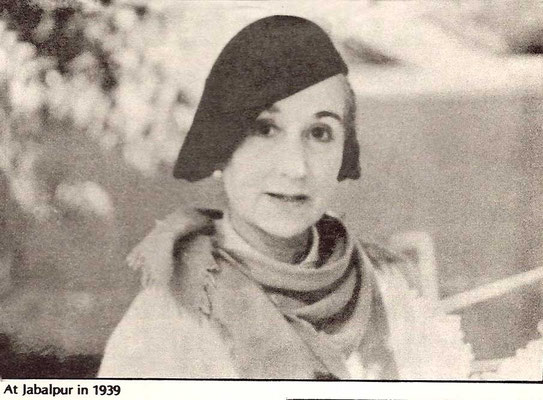 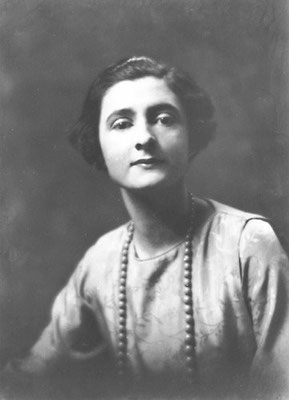 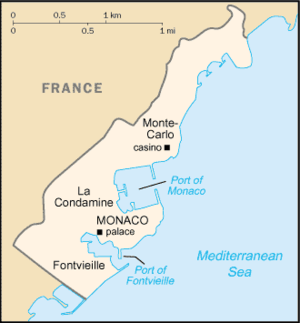 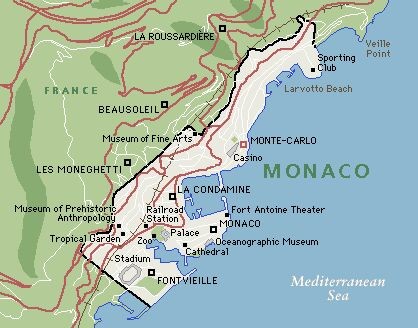 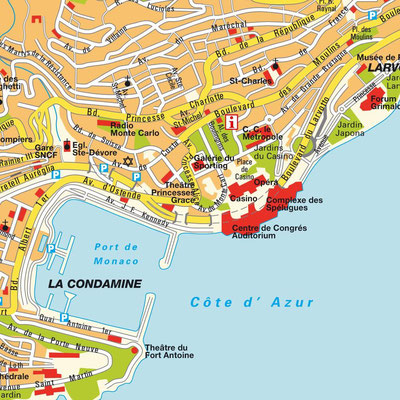 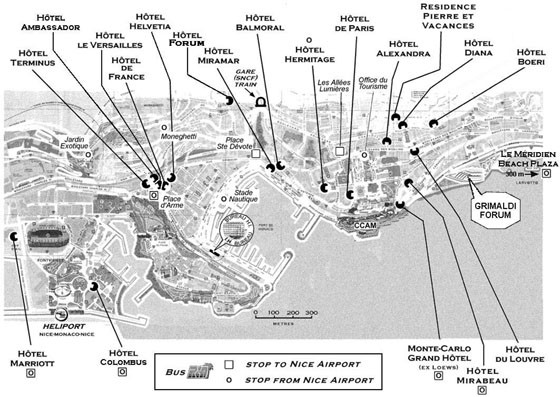 Monte Carlo (French: Monte-Carlo or colloquially Monte-Carl, Monégasque: Monte-Carlu) officially refers to an administrative area of the Principality of Monaco, specifically the ward of Monte Carlo/Spélugues, where the Monte Carlo Casino is located. Informally the name also refers to a larger district, the Monte Carlo Quarter (corresponding to the former municipality of Monte Carlo), which besides Monte Carlo/Spélugues also includes the wards of La Rousse/Saint Roman, Larvotto/Bas Moulins, and Saint Michel. The permanent population of the ward of Monte Carlo is about 3,500, while that of the quarter is about 15,000. Monaco has four traditional quarters. From west to east they are: Fontvieille (the newest), Monaco-Ville (the oldest), La Condamine, and Monte Carlo.

Monte Carlo (literally "Mount Charles") is situated on a prominent escarpment at the base of the Maritime Alps along the French Riviera. Near the western end of the quarter is the world-famous Place du Casino, the gambling center which has made Monte Carlo "an international byword for the extravagant display and reckless dispersal of wealth".[1] It is also the location of the Hôtel de Paris, the Café de Paris, and the Salle Garnier (the casino theatre which is the home of the Opéra de Monte-Carlo). The eastern part of the quarter includes the community of Larvotto with Monaco's only public beach, as well as its new convention center (the Grimaldi Forum), and the Monte-Carlo Bay Hotel & Resort. At its western border one crosses into the French town of Beausoleil (sometimes referred to as Monte-Carlo-Supérieur), and just 5 miles (8 km) to its east is the western border of Italy.

Charles III of Monaco was responsible for turning the Monte Carlo district and Monaco into a thriving town.

Founded in 1866, Monte Carlo has a name of Italian origin meaning "Mount Charles", in honor of the then-reigning prince, Charles III of Monaco. The specific mountain is the escarpment at the foot of the Maritime Alps on which the town stands.

The history of the area and the ruling Grimaldi family, however, dates back centuries. The port of Monaco is first mentioned in historical records as early as 43 BC, when Julius Caesar concentrated his fleet there while waiting in vain for Pompey. In the 12th century, the area fell under the sovereignty of Genoa, which was granted the entire coastline from Porto Venere to Monaco. After much conflict, the Grimaldis regained the rock in 1295, but suffered a significant amount of opposition in the ensuing years. In 1506 the Monegasques, under Lucien, Lord of Monaco, were under siege for some four months by the Genoan army, which had ten times the number of men. Monaco officially received full autonomy in 1524, but experienced difficulty retaining power, and on occasions briefly fell under the domination of Spain, Sardinia, and France.

By the 1850s Monaco’s reigning family was almost bankrupt; this was a result of the loss of two towns, Menton and Roquebrune, which had provided most of the principality’s revenues with their lemon, orange and olive crops.[2] At the time, a number of small towns in Europe were growing prosperous from the establishment of casinos, notably in German towns such as Baden-Baden and Homburg. In 1856 Charles III of Monaco granted a concession to Napoleon Langlois and Albert Aubert to establish a sea-bathing facility for the treatment of various diseases, and to build a German-style casino in Monaco.[2] The initial casino was opened in La Condamine in 1862, but was not a success; its present location in the area called "Les Spélugues" (The Caves) of Monte Carlo, came only after several relocations in the years that followed. The success of the casino grew slowly, largely due to the area's inaccessibility from much of Europe. The installation of the railway in 1868, however, brought with it an influx of people into Monte Carlo and saw it grow in wealth.[2]

In 1911 when the Constitution divided the principality of Monaco in three municipalities, the municipality of Monte Carlo was created covering the existing neighborhoods of La Rousse / Saint Roman, Larvotto / Bas Moulins and Saint Michel. The municipalities were merged into one in 1917, after accusations that the government was acting according to the motto "divide and conquer" and they were accorded the status of wards (quartiers) thereafter. Today, Monaco is divided into 10 wards, with an eleventh ward planned (but currently postponed) to encompass land reclaimed from the sea (see the "Administrative Divisions" section of Monaco for additional details).

The quarter of Monte Carlo was served by tramways from 1900 to 1953, linking all parts of Monaco (see transportation in Monaco). In 2003 a new cruise ship pier was completed in the harbour at Monte Carlo. 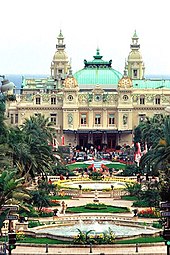 Monte Carlo is host to most of the Circuit de Monaco, on which the Formula One Monaco Grand Prix takes place. It also hosts world championship boxing bouts, the European Poker Tour Grand Final and the World Backgammon Championship as well as fashion shows and other events. Although the Monte Carlo Masters tennis tournament is billed as taking place in the community, its actual location is in the adjacent French commune of Roquebrune-Cap-Martin. Monte Carlo has been visited by royalty as well as the general public and movie stars for decades. The Monte Carlo Rally is one of the longest running and most respected car rallies; from 1973 to 2008 and again from 2012, it marks the start of World Rally Championship season, having also served as the curtain-raiser for the Intercontinental Rally Challenge between 2009 and 2011. The rally, however, takes place outside the Monte Carlo quarter and is run mostly on French roads.

Monte Carlo is one of Europe's leading tourist resorts, although many of the key tourist destinations are located in other parts of Monaco, including such attractions as Monaco Cathedral, the Napoleon Museum, the Oceanographic Museum and aquarium, and the Prince's Palace, all of which are located in Monaco-Ville.

The Opéra de Monte-Carlo or Salle Garnier was built to designs of the architect Charles Garnier, who also designed the Paris opera house now known as the Palais Garnier. Although much smaller, the Salle Garnier is very similar in style with decorations in red and gold, and frescoes and sculptures all around the auditorium. It was inaugurated on 25 January 1879 with a performance by Sarah Bernhardt dressed as a nymph. The first opera performed there was Robert Planquette's Le Chevalier Gaston on 8 February 1879, and that was followed by three more in the first season.

With the influence of the first director, Jules Cohen (who was instrumental in bringing Adelina Patti) and the fortunate combination of Raoul Gunsbourg, the new director from 1883, and Princess Alice, the opera-loving American wife of Charles III's successor, Albert I, the company was thrust onto the world's opera community stage. Gunsbourg had remained for sixty years.

By the early years of the twentieth century, the Salle Garnier was to see such great performers as Nellie Melba and Enrico Caruso in La Bohème and Rigoletto (in 1902), and Feodor Chaliapin in the premiere of Jules Massenet's Don Quichotte (1910). This production formed part of a long association between the company and Massenet and his operas, two of which were presented there posthumously.

Apart from Massenet, composers whose works had their first performances at Monte Carlo included: Saint-Saëns (Hélène, 1904); Mascagni (Amica, 1905); and Puccini (La rondine, 1917). Indeed, since its inauguration, the theatre has hosted 45 world premiere productions of operas. René Blum was retained to found the Ballet de l'Opéra. The "Golden Age" of the Salle Garnier is gone, as small companies with small houses are not able to mount productions that cost astronomical sums. Nonetheless, the present day company still presents a season containing five or six operas.

The Hôtel de Paris, established in 1864 by Charles III of Monaco, is located on the west side of the Place du Casino in the heart of Monte Carlo. It belongs to the Société des bains de mer de Monaco (SBM), and is part of the elite Palace Grand Hotels in Monaco with the Hotel Hermitage, the Monte-Carlo Beach Hotel on Monte-Carlo Bay Hotel & Resort, the Metropole Hotel and Fairmont hotel.

Additionally there are 74 suites and junior suites which are grouped similarly, offering more luxury than the rooms. There are single and double suites as well as courtyard junior suites and Sea/Casino Junior suites.[5] There is also one Presidential suite.[