All films taken of Meher Baba throughout his life was on film stock, whether it was 8, 16 or 35 mm formats.

These in due time were copied to the VCR tape formats which were either VHS ( Video Home System ) or Betamax in the late 1970s and for the next a couple of decades, where upon the digital format DVD ( Digital Versatile Disc ) was introduced in 1996-7 and quickly became the new standard.

Both the video formats also had the 3 different television standards which dominated the world.

The DVDs still retained the different television systems when they were introduced but also had 8 different world zones, because of the pirating of intellectual properties.

Most of the world since have adopted 3 digital systems to improve their transmissions.

See the end of this page for the globe map showing the different tv systems.

In this beautiful video, Meher Baba is presented simply and directly as the God of Love. Using rare and extraordinary footage taken over a period of nearly 40 years, the film captures the warmth, humor and compassion of the man whose love has touched so many hearts. The story is movingly told through the experiences of three of Baba’s closest disciples: his sister Mani, Eruch Jessawala, and Dr. Goher Irani. 40 minutes.

These two short but precious and beautiful films of Baba, Meher Baba's 1932 Message to America and Meher Baba at Harmon-on-Hudson 1932 are now combined onto one DVD.

The first film, Meher Baba's 1932 Message to America was rediscoverd in 1993 in the archives of the University of South Carolina. This unedited footage was recorded in May 1932 by Movietone in New York. In it, Baba answers questions posed by Meredith Starr about his mission in America. The second film, Meher Baba at Harmon-on-Hudson 1932 was taken by Paramount in 1932. This newsreel was rediscovered in 1994 in a film archive in New York. Enhanced by freezepframing of the best shots of Baba and comments on the film written by Mani, this is an extraordinary look at the young Meher Baba. 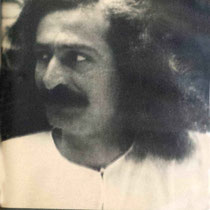 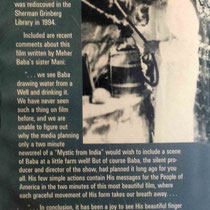 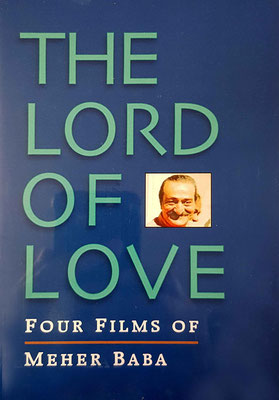 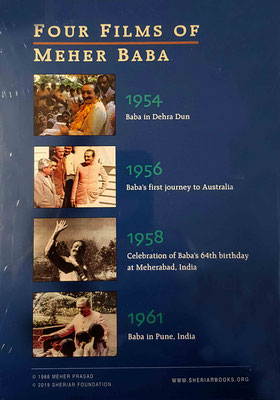 THE PROCESS OF AWAKENING

THREE-QUARTERS OF THE WORLD

A Chat between BHAU KALCHURI 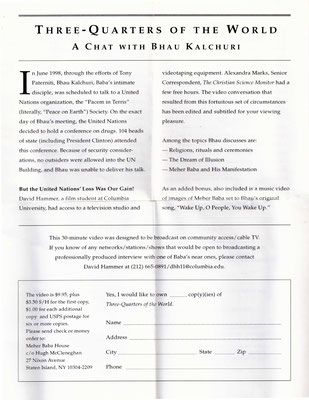 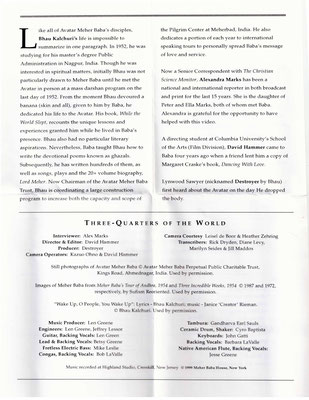 MEHER BABA - AVATAR OF THE AGE ; The Movie

ACROSS THE SEVEN SEAS

CREATIVITY IN THE DREAM

A DATE WITH THE ETERNAL BELOVED

A  CONVERSATION WITH BAL NATU

BEADS ON ONE STRING

The first program in the Witness Series presents Mehera’s story of how she came to Meher Baba. This program was filmed in 1986, three years before Mehera’s passing. 58 minutes.

All this and Heaven too : Mani S. Irani

Each one his duty :

In this videotape filmed at Meherazad in 1986, Dr. Goher Irani reviews her life with Meher Baba. Goher met Meher Baba in 1922 when she was six. In this videotape she describes how Meher Baba directed her education and training as a doctor, her life as a member of the women mandali and her role as physician and companion to the Avatar. 57 minutes.

: A TALK BY MANI IRANI

DOING ALL FOR HIS SAKE

: A TALK BY MANI IRANI

: A TALK BY KITTY DAVY

The Theme of Creation

ALL COVERS ART BY ANTHONY ZOIS

The different television systems in the World