This web page will follow Merwan Irani's spiritual introduction with Perfect Master Babajan in 1913,including his important meetings with the other 4 Perfect Masters.

There is a dedicated folder on this website which features each of the Perfect Masters individually, where more information is available.

Click on images and maps to enlarge them, also click on the under-scored names to visit their web-pages.

The 5 Perfect Masters of the Early 1900s All images colourized by Anthony Zois. Click on image to see their respective names.

Click below on the Perfect Master to visit their respective web-page.

MAP OF INDIA - SHOWING THE STATES WITHIN 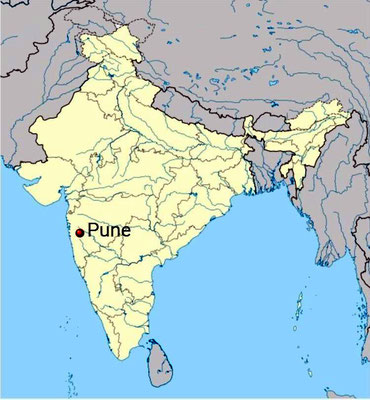 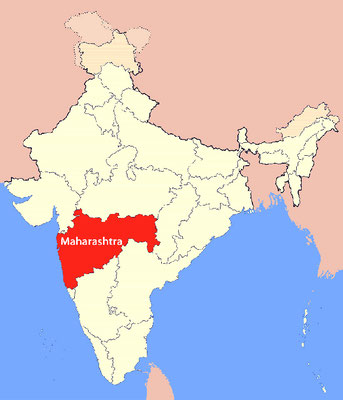 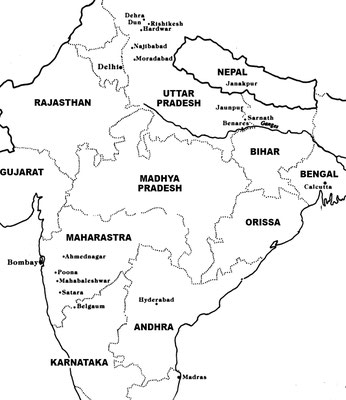 The story of Merwan S. Irani spiritual journey continues from the previous webpage.

Life was now totally empty except for one person: Hazrat Babajan. From that day in May 1913 onward ( when she embraces Merwan ) , for the next seven months the only thing Merwan did regularly was to visit Babajan every evening.

He longed to be in her company. For hours he would sit by the old woman's side — sometimes late into the night. They hardly spoke.

Nevertheless, every evening without fail Merwan would go to Babajan. He did not care about the remarks of people who shook their heads, clucked their tongues, and wondered, "Merwan was such a good boy — the son of respectable, devout Zoroastrian parents. What has happened to him to make him sit by that old woman every night?" His good name and admirable character were routinely slandered. But it did not concern him, for with that one embrace from Babajan, Merwan's life in illusion had ended and the merging of his life in divinity had begun.

Flooded with light, he felt as if millions of watts of electric current were speeding through his body, dissolving his flesh and bones. He had no body; his being now consisted of electricity. His body had transmuted into light!

The veil that the five Perfect Masters had drawn over Merwan had been torn away by Babajan's kiss. "Merwan" was gone; he found himself being drowned and absorbed by the Infinitude of God. He was given the infinite consciousness of being God but, in turn, he lost his awareness of time and space, of his body and mind, and of the world and the gross plane. He had only the conscious, continual experience of "I Am God ... I Am God ... I Am God." Nothing else existed for him.

In the following nine months, Merwan lived without sleep. His eyes became glassy, and a vacant stare remained the fixed expression on his once-animated face. If he sat, he would sit for hours without moving — seemingly staring into empty space. If he paced about the house, he would keep it up until someone could not stand it any longer and stopped him.

On one very hot day, Merwan slipped out of the house and started walking toward the river. He reached Bund Gardens, but, without stopping there, he turned around and hurried toward home again.

After going some distance, he again turned around and headed back toward Bund Gardens. When he reached the park, he quickly changed direction again and walked toward home. He did this three times, walking fifteen miles in the blazing afternoon sun. He had walked so fast that it would have exhausted an ordinary man, yet he did not seem affected by it.

During this period Merwan would often slip out of the house to visit Babajan for very long periods.

At some time after July 1914, he and his larger family moved back again into Bhopla House ( Pumpkin House ) at 816 Butler Mohalla after almost 20 years.

One night during January 1914, as Merwan was about to leave Babajan's company, he reverentially kissed his Master's hand. Babajan held Merwan's face in her hands and looked deeply into his large brown eyes with an expression of the profoundest love. The time had come. With her divine authority, she kissed him on the forehead.

Turning to her followers nearby, Babajan pointed at Merwan and declared, "My beloved son will one day shake the world and all of humanity will be benefited by him."

Merwan just stood there, for as soon as Babajan had kissed him, he became insensible.

Mechanically, he began to retrace his steps back home. His dazed mind had no conception of his surroundings; his body was moving, but he was unaware of what he was doing or where he was going. In this state of near oblivion, he reached home about eleven o'clock and went straight to his room and lay on his bed.

The lifting of the veil had occurred through an extraordinary, divine experience. Within ten minutes of lying down, Merwan again felt the same feeling he had experienced after Babajan's embrace in May — but now it was intensified a thousand fold! 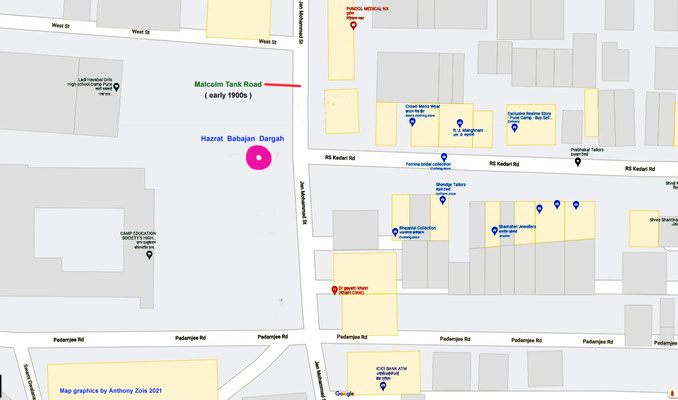 Refer to larger previous maps to see the location within Poona. 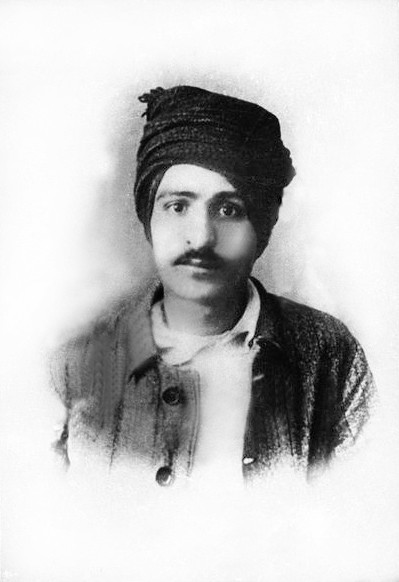 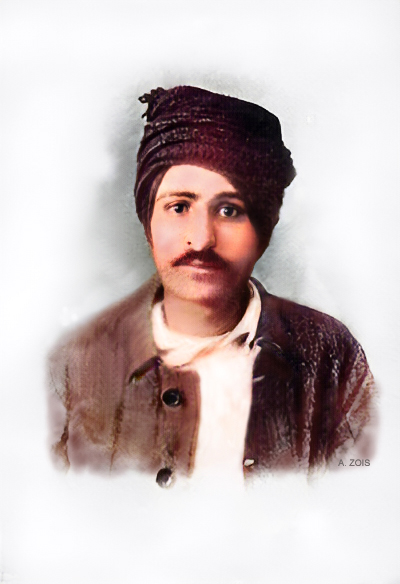 August ( 1st ) Behramji procured a licquor licence ( in his name ) & in partnership with Merwan opened a toddy shop at 723 Kasba Peth Road on a fishing wharf of a river. Soon afterwards, his friends started to call him Merwanji, then later to Merwan Seth. He was still pounding his forehead daily, for up to 4 hours.